Glamourie was conceived as a platform for your creativity. Or, to put it more poetically, the book is a treasure chest of design ideas. It is a case of seek and ye shall find, for if you are prepared to go on a treasure hunt then you will see that I have packed the book with components that can be used in an infinite number of ways. These components – call them Knitting Spells if you wish – are like building blocks that can be used to create any kind of structure, from the elegant and understated to the exotic and fantastic. As the Glamourie costumes emerged from my needles, I became ever more excited about the concept of providing you with the materials for a whole lifetime of creativity. 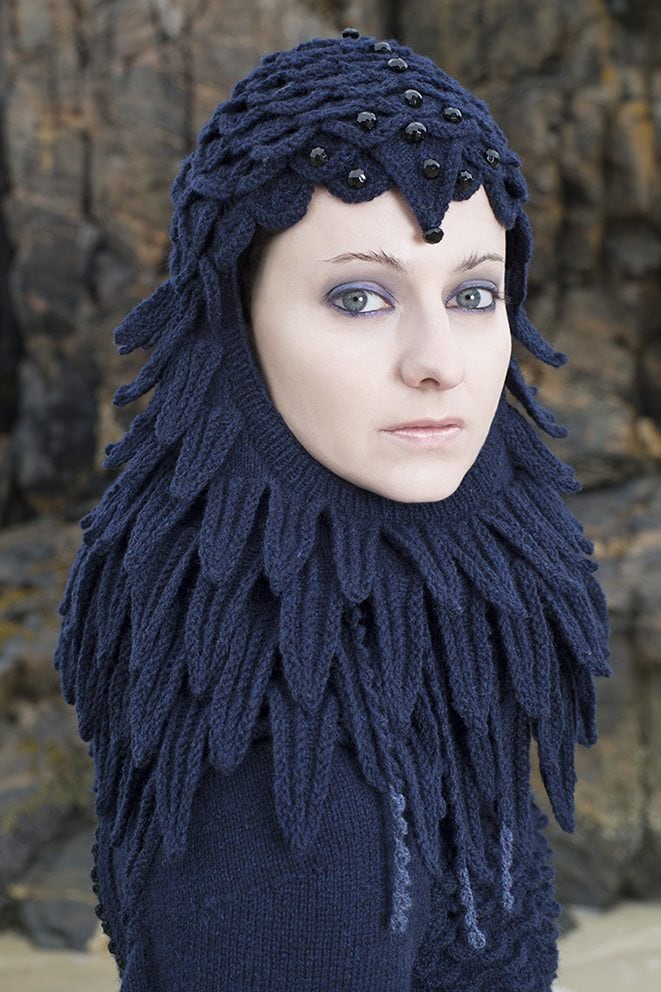 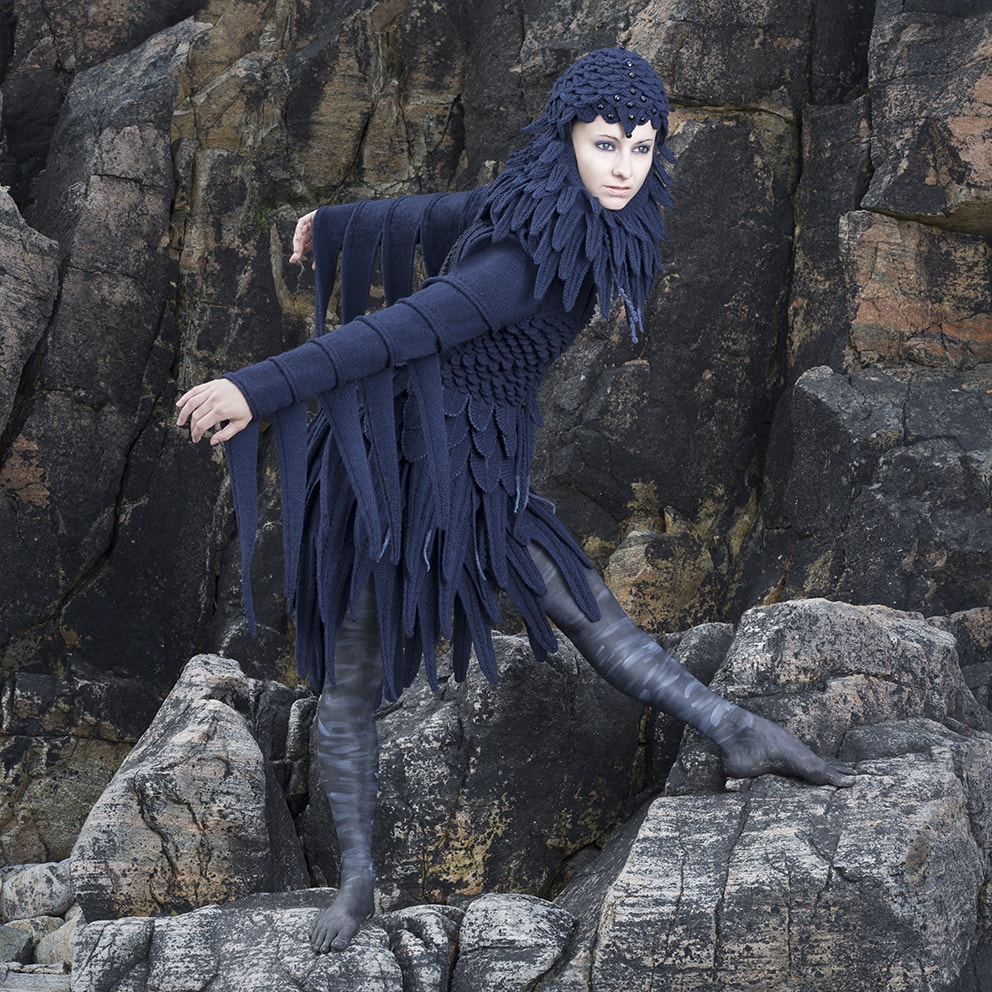 The most versatile of these “building blocks” are the feathers that I created for the Raven costume hood. The Raven’s head and neck contours are very distinctive: the sleek, flat head gives way to a heavily feathered neck and bristled throat. When the bird is sitting the appearance is very suggestive of a wide hood covering its shoulders. In order to depict this in a knitted piece, I began by studying the feathers and how they behaved when the bird moved its head from a stationary position.

I began the knitting by making the throat bristles from lengths of picot chains which I accented by working the ends in quietly different shades of blue and purple. These would be worked in at the throat along with the pointed feathers I created to form the wide feathered neck. The Raven contours were achieved by gradually decreasing the size of the pointed feathers in each layer and thus the overall width of the hood. For the flat head shape I used the rounded feathers that I created for the chest of the costume. I made these sit close to the head and gradually decreased them in size to the very tiny rounded feathers at the crown.

The manner in which a raven positions and moves its head and neck is radically different from that of a human and it was important that the hood would allow our dancer/model to interpret these key aspects of the Raven’s movements in the photographs. To facilitate this I knitted an inner roll which I stitched at a precise point around and inside the hood. This meant that the lower, wider part of the hood draped perfectly over the shoulders exactly as the Raven’s heavily feathered neck joins its body. This also worked perfectly at the throat so that when the dancer moved her head forward the ‘beard” moved forward and away from the chest, just like a real raven. This does of course mean that the hood – and indeed the whole costume – would be an absurd and unwieldy piece of clothing to wear outside of an outdoor theatre in a cold climate, which is precisely what I made it for.

But as with all of the costume pieces, my intentions were also inspirational – to provide me and you with the platform for making endless variations. Hence the Raven designs in Glamourie contain the blueprint instructions for the pointed and the rounded feathers. The Sea Anemone design contains the instructions for making the picot chains. 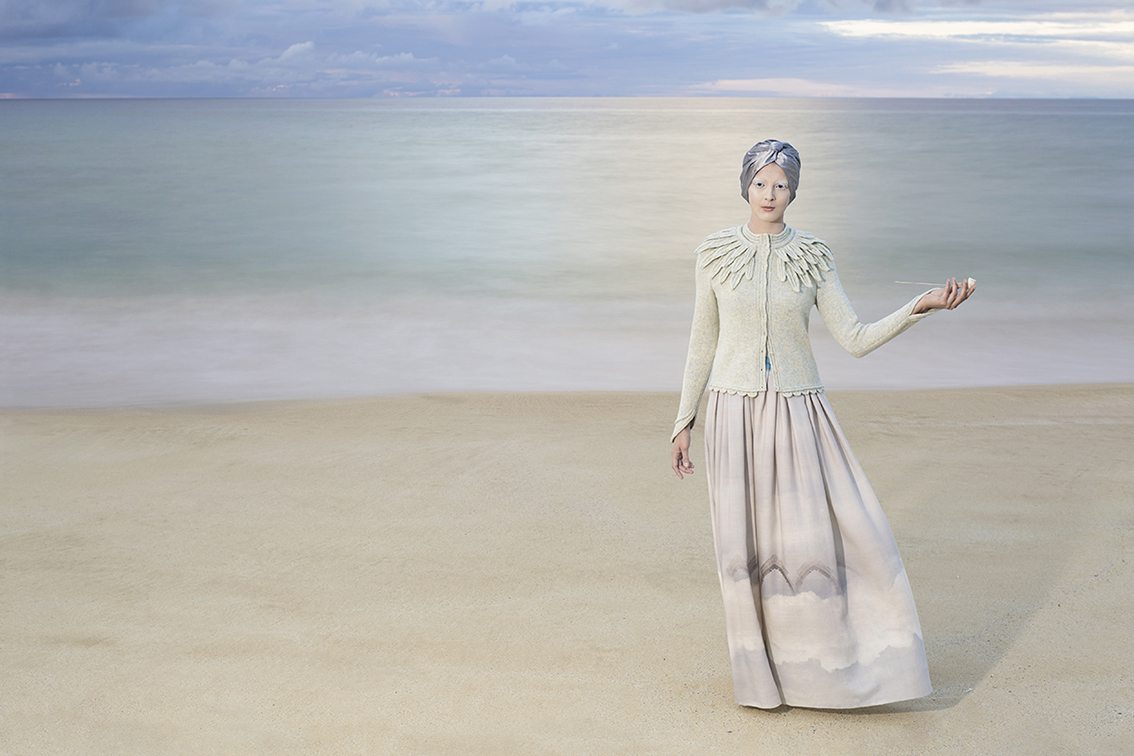 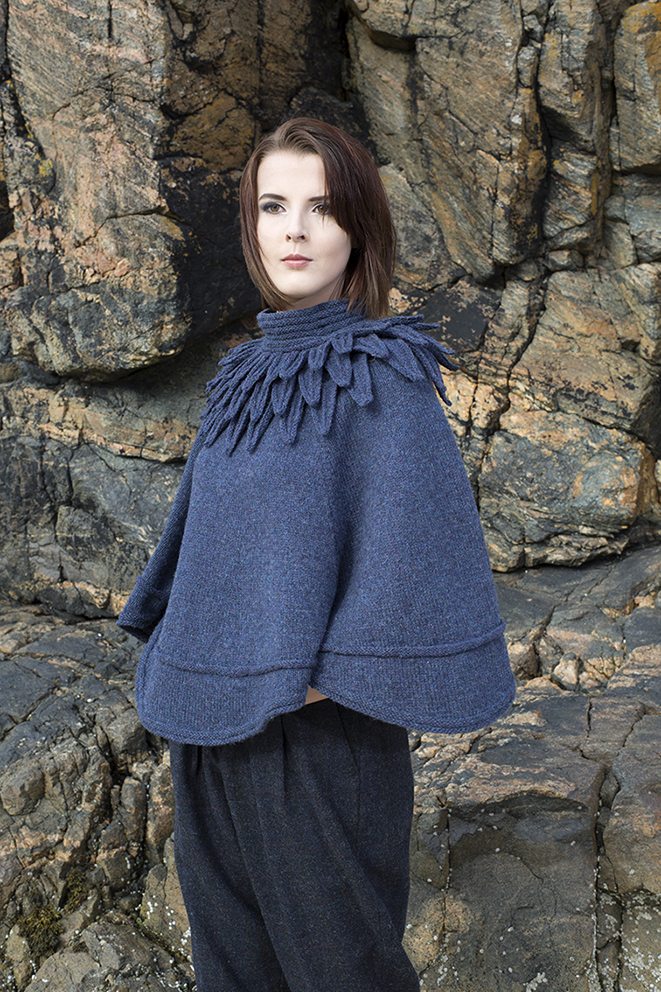 All of these individual components can be very easily varied by size, texture and colour. Then they can be assembled in any kind of composition you care to dream up. For example you will see in the FELTING section how I made pointed feathers into the Sea Anemone’s costume tentacles, her starfish accessory and the Cailleach’s knitting needle case. 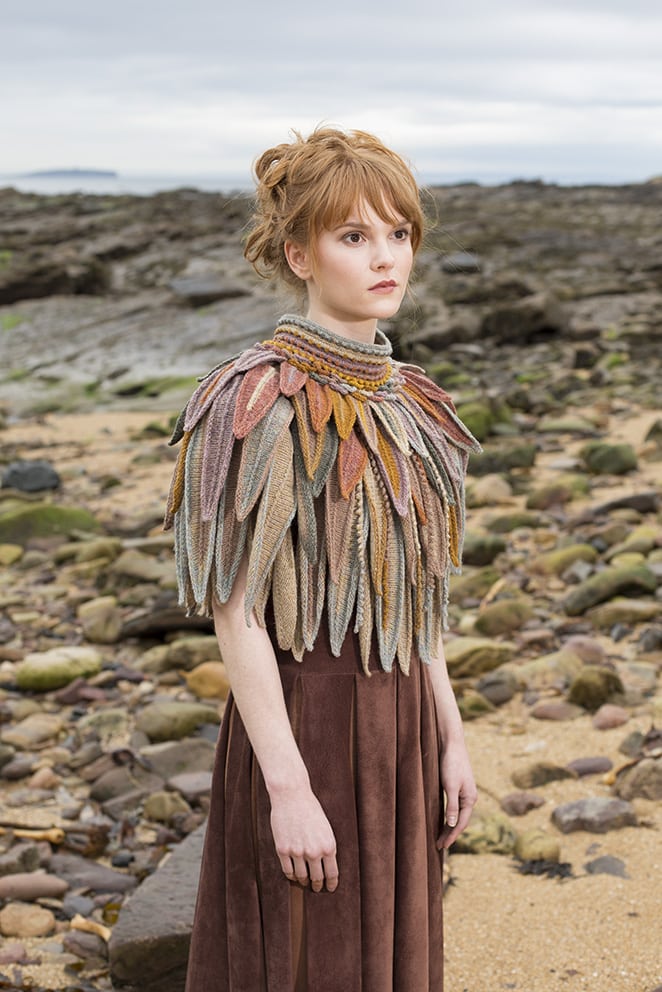 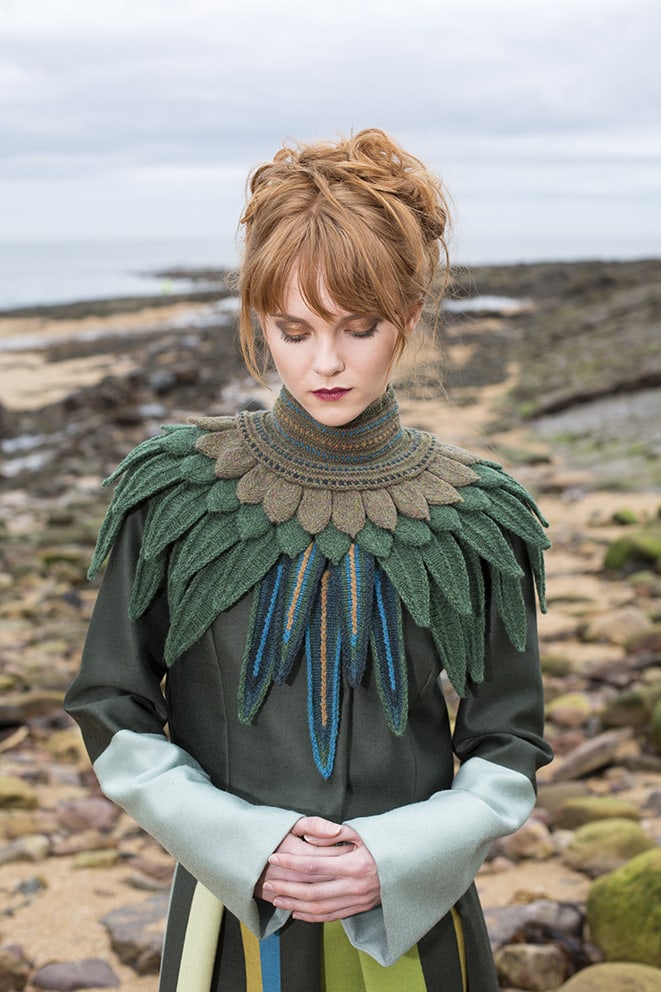 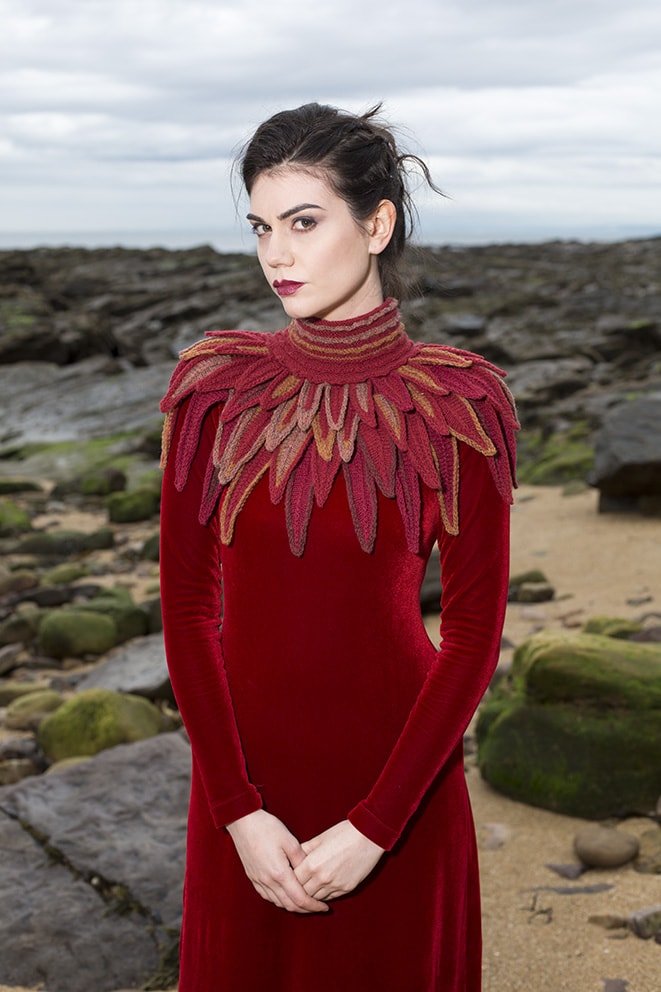 Jade and I will now demonstrate the fabulously dramatic potential of the building blocks that I have provided in Glamourie’s design section. We had a lot of fun making feathery collars, all based on the instructions for the Raven Poncho collar. We used its tiered, decreasing structure for all the collars featured here. The pointed feathers are the component common to all, but in keeping with the shape-shifting theme, we also employed a variety of components from other designs in Glamourie.

We hope that our collars and descriptions of them will be of interest and inspire you to make your own feathery flights, as subtle or as fancy as you please. One thing is guaranteed, that they will cause comment wherever you wear them. 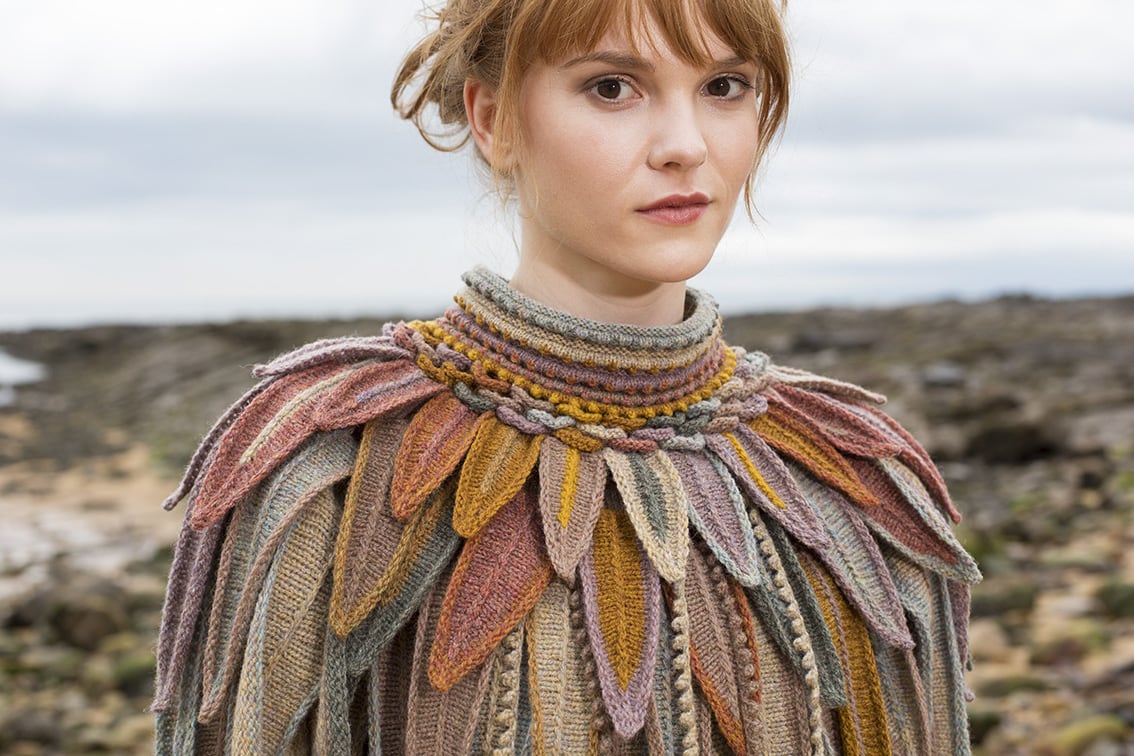