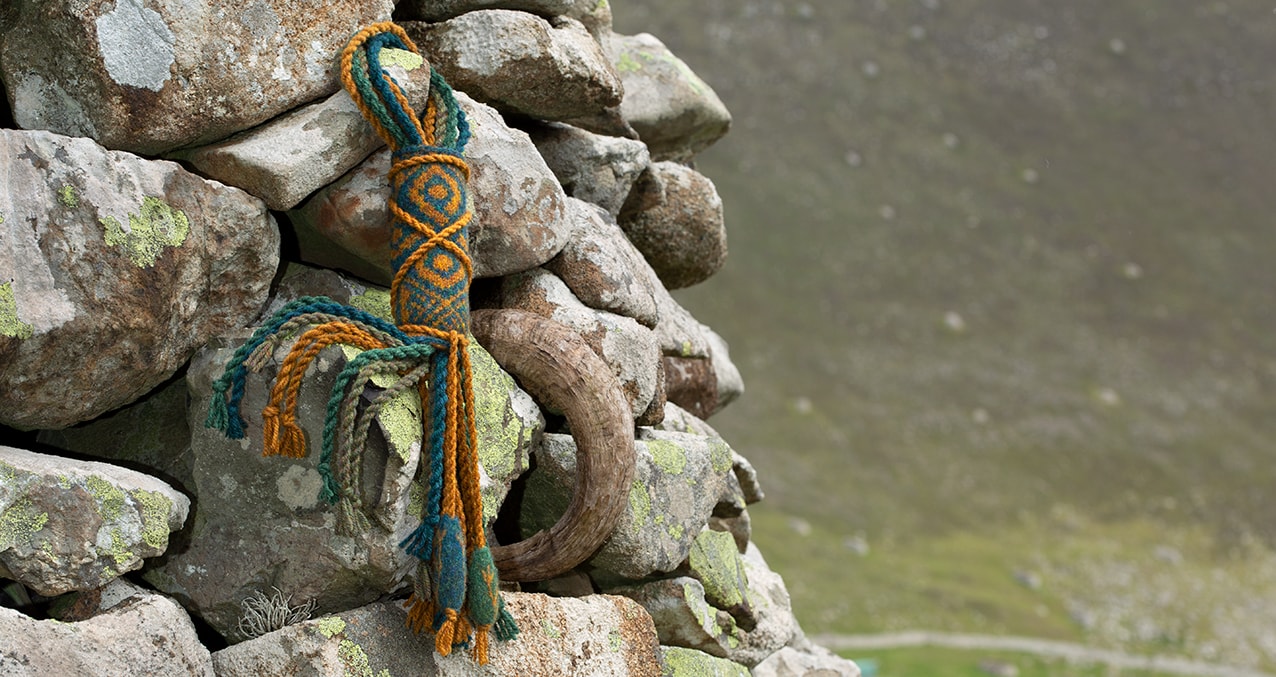 In Gaelic legend there was an era called An Aois Òg (The Young Age) when the Earth was far different from what it is today, and land bridges existed across oceans. The fact that this concept is close to geological reality is something that I find quite staggering.

On Hiort, Taigh na Bana-Ghaisgich (The Heroine’s House) is situated close to the Well of Virtues in the Gleann Mòr on the North-West of the main island. It was later known as the Àirigh Mhòr where the women resided in summer whilst tending the cattle. According to a legend of Hiort, the building was the home of the Bana-Ghaisgeach (Heroic Woman) who in the Young Age went hunting deer on horseback over a plateau that stretched from Hiort, forty-odd miles across the ocean, to link with Harris.

I love this grand legend – it immediately conjures up visions of this heroic woman who, if she and her companions could scale monumental sea cliffs, would think nothing of galloping on horseback over a plateau of her own creation to hunt large creatures never seen on Hiort. I see her dressed in gold and green to command these creatures of the Harris hills and she surely would bring with her some strong ropes, as these have always been essential to survival on Hiort.

Early ropes were made from carefully prepared hide. It required a great deal of skill to cut a single long strip, beginning from the outside and cutting deiseal (clockwise), spiralling precisely to the centre. Three of these strips were then plaited together before the whole length was enclosed in a peilid (sheepskin). The most precious heirloom a father could bequeath his son or daughter was his rope, which was considered worth at least two of Hiort’s very best cattle.

I made the Heroine’s ropes by twisting my Hebridean yarn of Golden Plover, Lapwing, Bogbean and Machair. I made sure I did this clockwise and to enclose them, I knitted and felted a cover in my Celtic key and knot pattern, which I then secured with a rope decorated with felted beads embroidered with antler and eternal knot designs. Her costume will begin to form from this beginning. 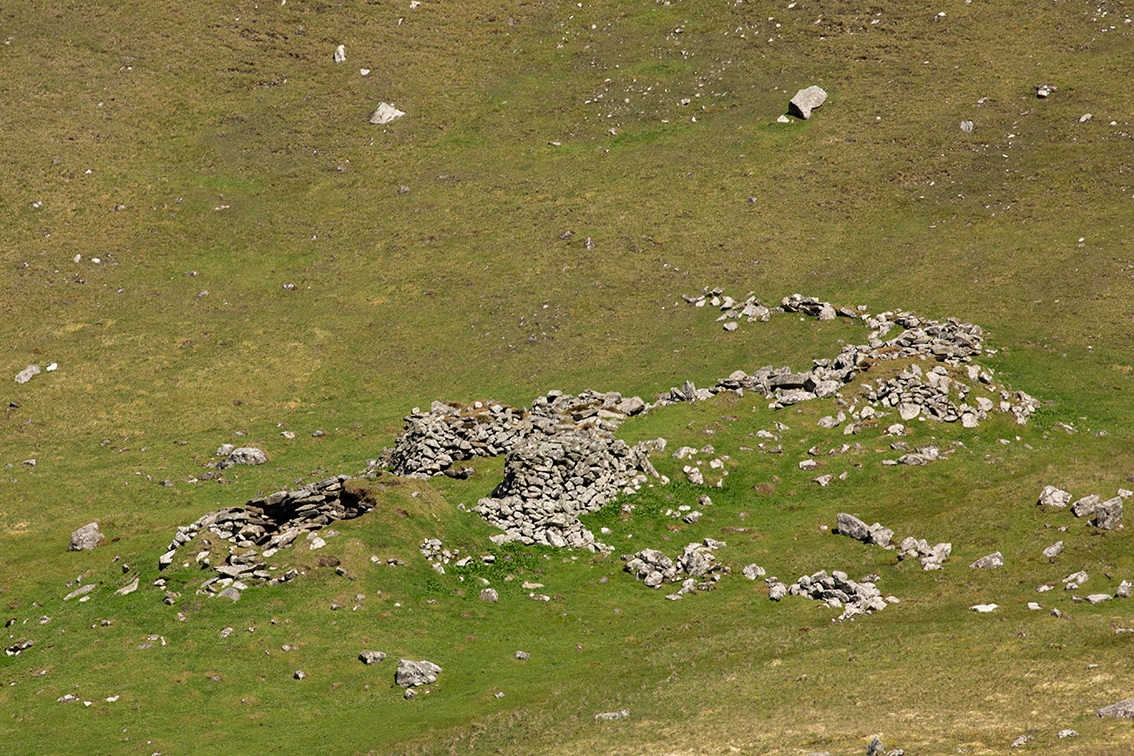 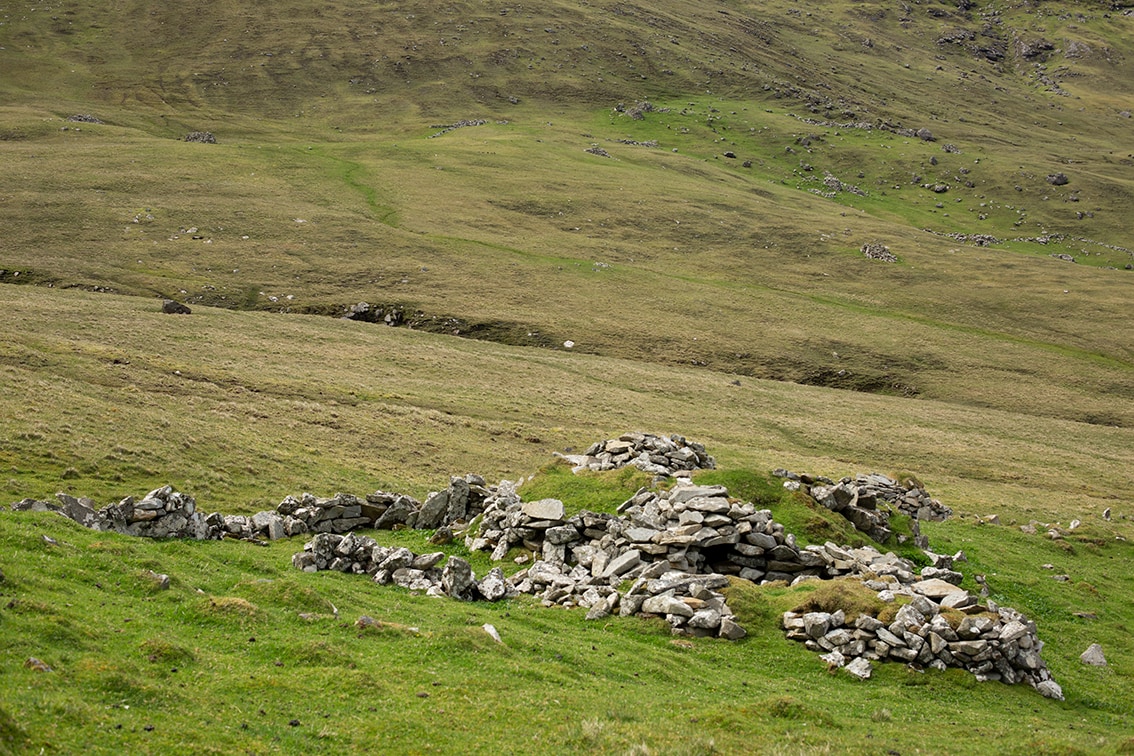 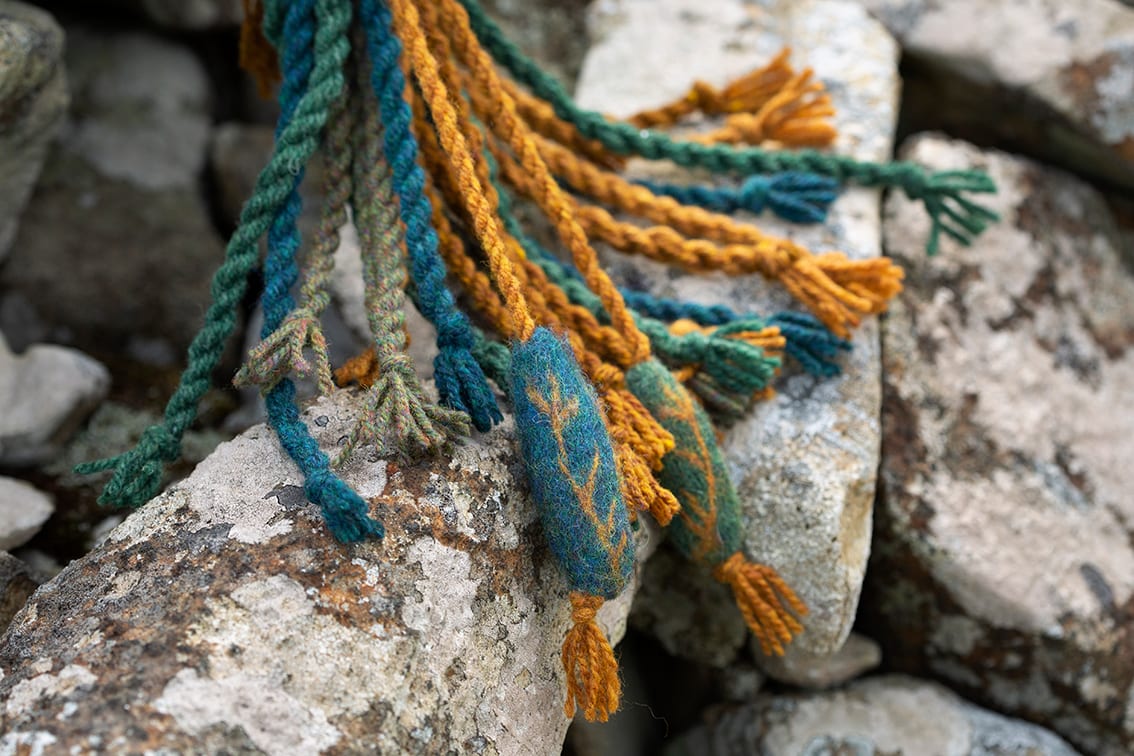 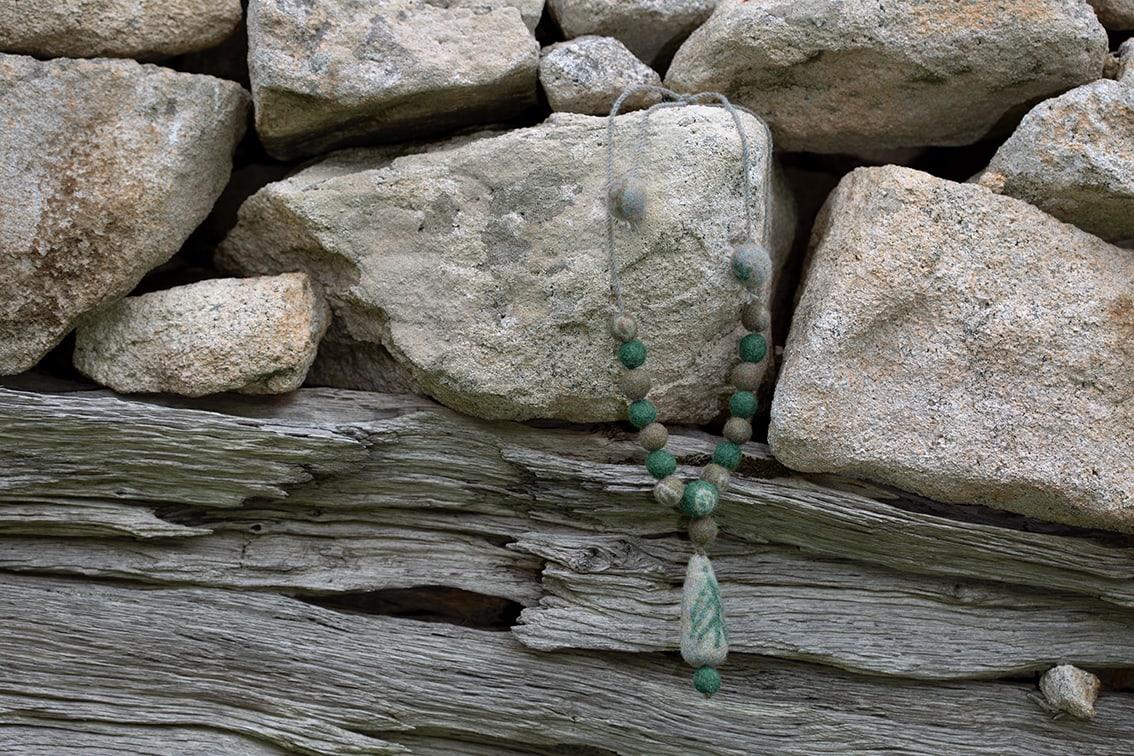 The legendary Heroine hunted in the deer forests of Harris. Although areas of Lewis and Harris are still known as deer forests, there have been no great forests in the islands since the ice-age changed the landscape thousands of years ago.

Hiort was untouched by the ice sheets, but no trees or shrubs have ever grown there. Seeing a tree for the first time was as exotic an experience for a St Kildan as anything unknown to them on earth. It is a great irony that when the islanders were evacuated in 1930 those that were settled in Morven, Argyll were given employment with the Forestry Commission, planting trees. For the most part, their only experience of trees was in the wood of their few boats and driftwood cast ashore, which they put to any number of uses, such as this cleit lintel made of a magnificent chunk of driftwood. I can imagine that they might have dreamt of the huge tree that it came from.

I made the amulet to represent the legendary deer forest and also to acknowledge the tree as a rare thing of exotic beauty and the source of precious wood. 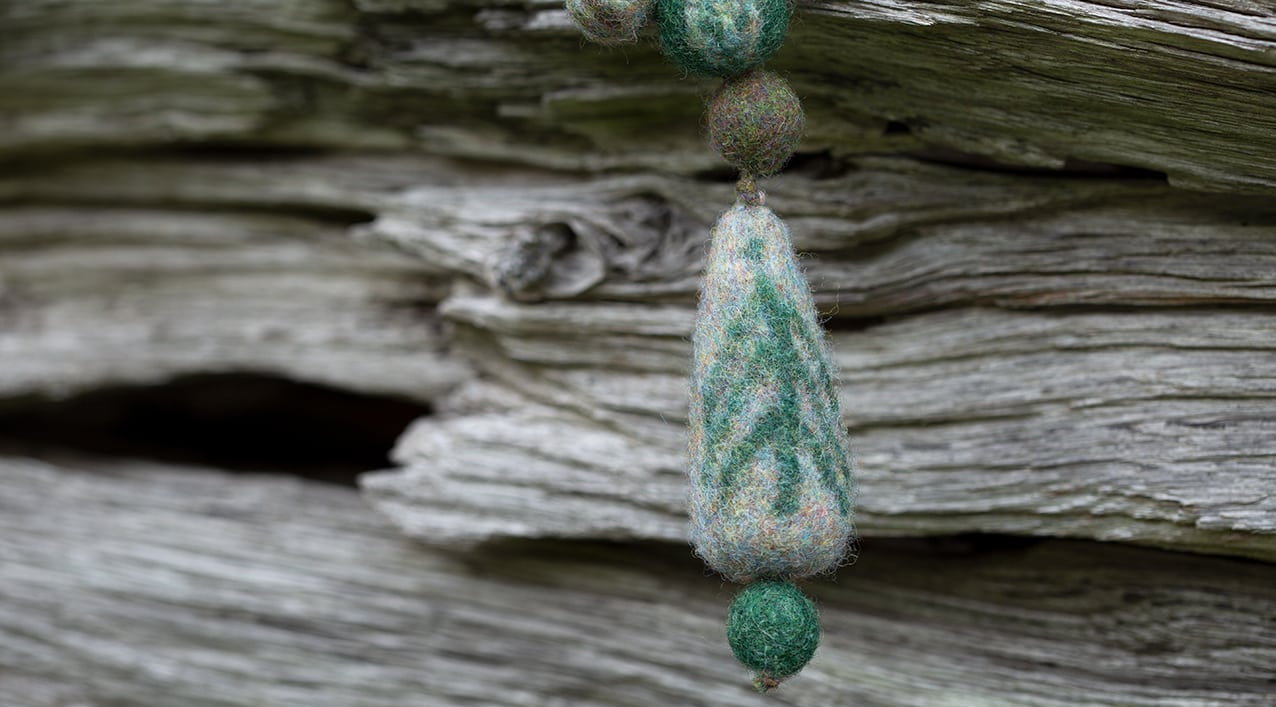 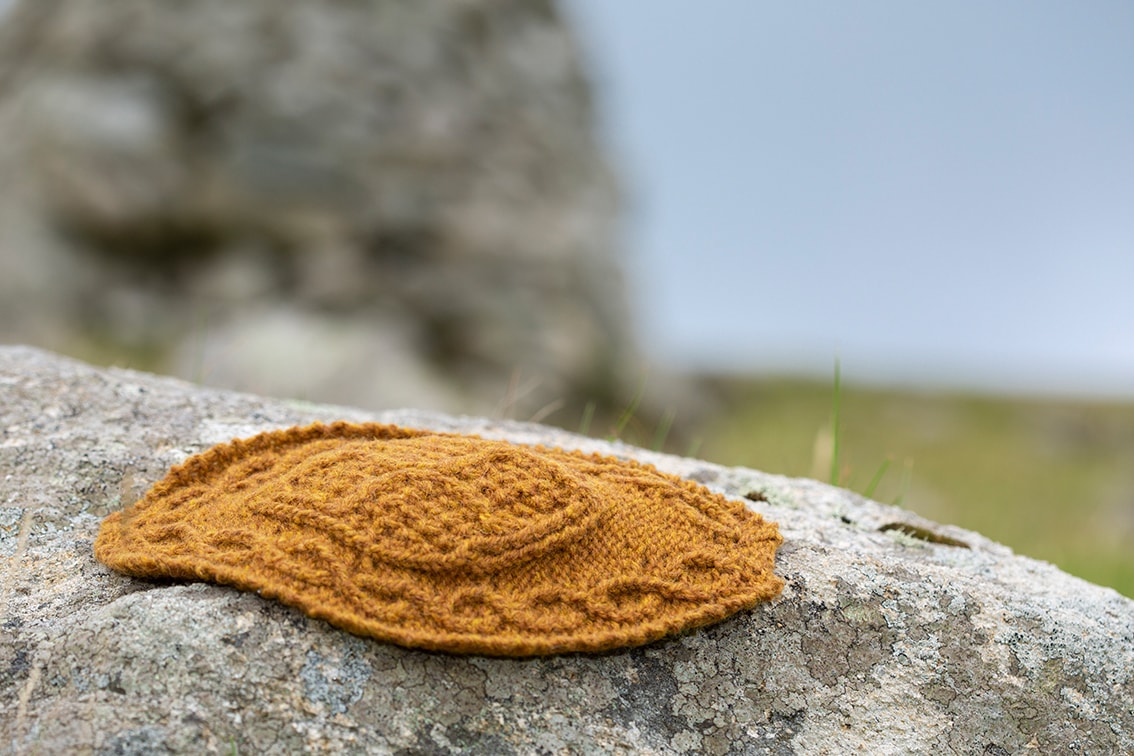 When she was not hunting, the Heroine would have been the mistress of the hearth in Gleann Mòr. Legend has it that she ran a dairy and this is no doubt rooted in the life of summer pastures where the women and children stayed to look after the cattle. The cows were milked daily and butter and cheese was made throughout the season. The fire was central to living on the àirigh and even on the warmest summer days and nights it was never allowed to go out. It would be banked up with fibrous peat whilst not required for cooking or heating, and should anyone’s fire inadvertently go out, a neighbour could always be relied upon to provide an ember to revive it. Everything was easily shared and this included the bannocks made on a flat iron girdle which was suspended by its semi-circular handle on a hook over the fire. Aran-eòrna (barley bread), aran-coirce (oatcakes) were a staple, and for a special treat aran-cridhe (gingerbread) would be made and gifted to all on the pasture. Though it is highly unlikely that anyone on Hiort in the days of the Heroine would have had ginger to hand, the name aran-cridhe literally translates as heart or courage bread, and I think this term is suited to the legend. I made this knitted sketch in the shape of a girdle-baked courage-bread bannock to celebrate the heroic guardian of the hearth.