Location descriptions of Hiort through recorded ages reflect the other-worldly nature of the place and its remote and isolated position as an alluring outpost in the Atlantic ocean. Hector Boece first brought the islands to the attention of the wider world in 1527 with his description of Hiort as The Last and Outmaist Ile. It is also often referred to as the island on the edge of the world and in Gaelic as Hiort, far na laigh a’ghrian (St Kilda, where the sun never sets).

The romance of these titles is not diminished by the physical sight of the place as its cliffs and stacs rise like a mirage out of the wide, open ocean. Ideas of scale and distance are visually blown away and it is easy to believe that indeed you are on the edge of another world. The little outline of each island and tiny dot of each stac on a map cannot convey the majestic reality of each one. This is illustrated above by the face of Levenish from the Village Bay.

But of course, Hiort is fixed in this world. It lies approximately 40 miles west of the nearest landfall in the larger chain of the Outer Hebrides. It forms the most westerly point of the Parish of Harris, and is 54 miles from the harbour of An t-Òb (Leverburgh), which for centuries was the principal embarkation point for travellers to and from Hirta.

The Outer Hebridean chain itself lies roughly 40 miles (depending on the ragged coastline) off the north-west coast of mainland Scotland. These distances may seem very short to people from much larger countries, but both the physical and cultural landscape changes dramatically across the many and varied regions of Scotland, no more so than in the Outer Hebrides where the same Gaelic language of Hiort is still spoken from day-to-day. 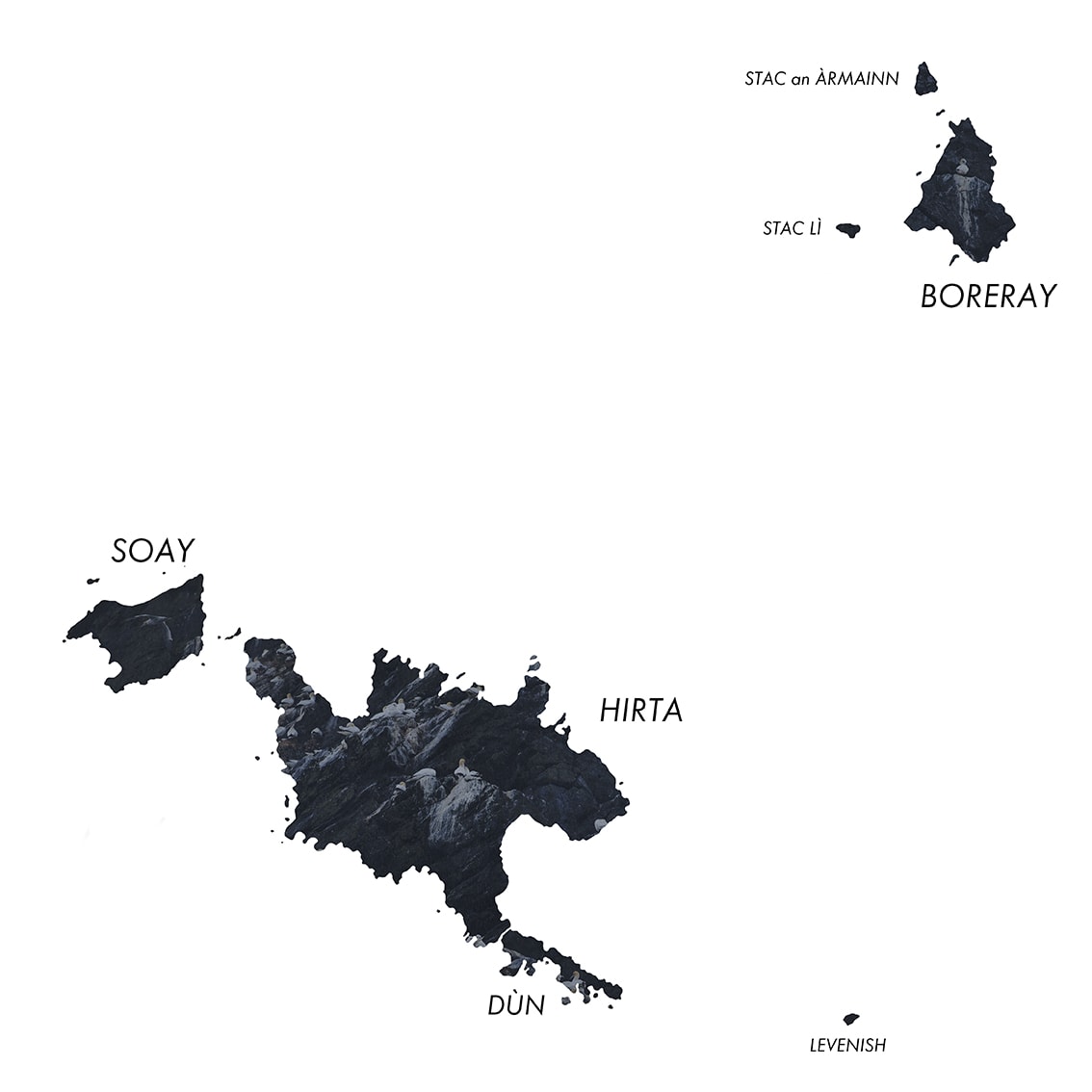 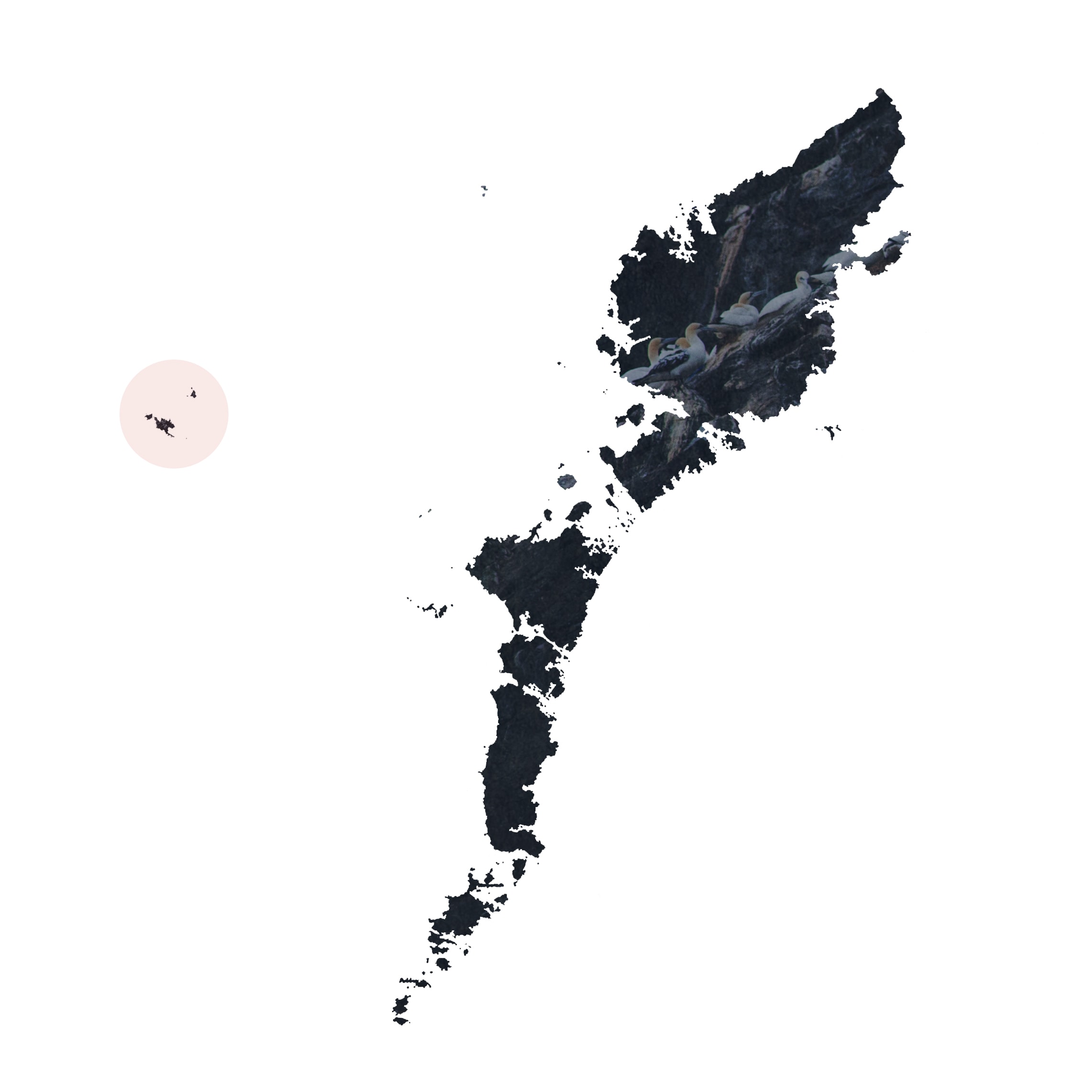 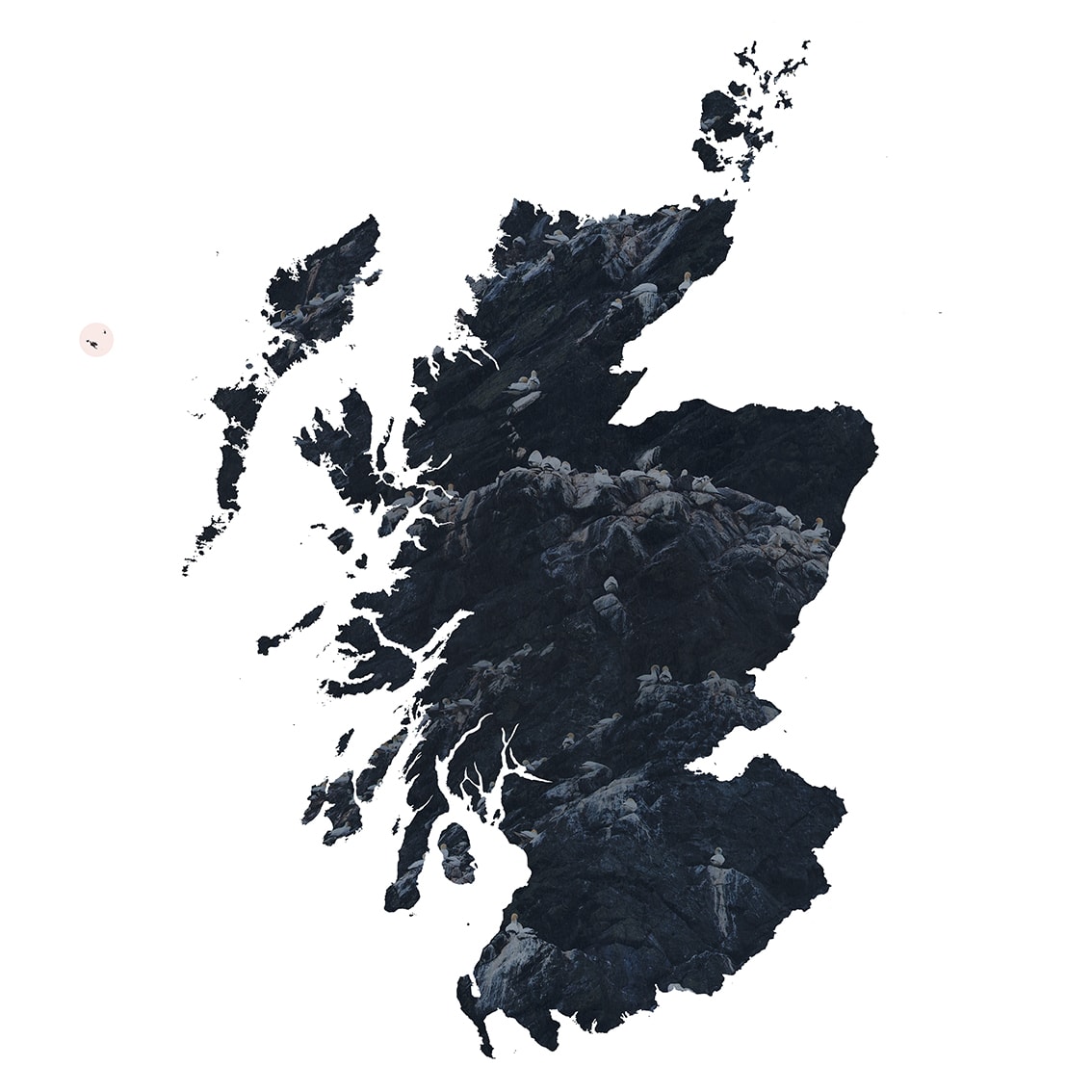 Boreray rises up like a great natural cathedral four miles east of Hirta. Its highest point is 380 metres above the ocean with its steep grassy western flank facing the north-eastern coast of Hirta. From the angle shown here, taken from the stretch of sea between, the 172 metre tower of Stac Lì sits in front, its angled cap made distinctly white by the thousands of gannets perched on top. To the north (on the left of the photo) is Stac an Àrmainn (the Warrior Stack), which at 190 metres is the highest sea stack in Britain.

Below is a closer look at the left-most clifftop of Boreray which reveals the white patterns to be rows of gannets perched on the narrow ledges. 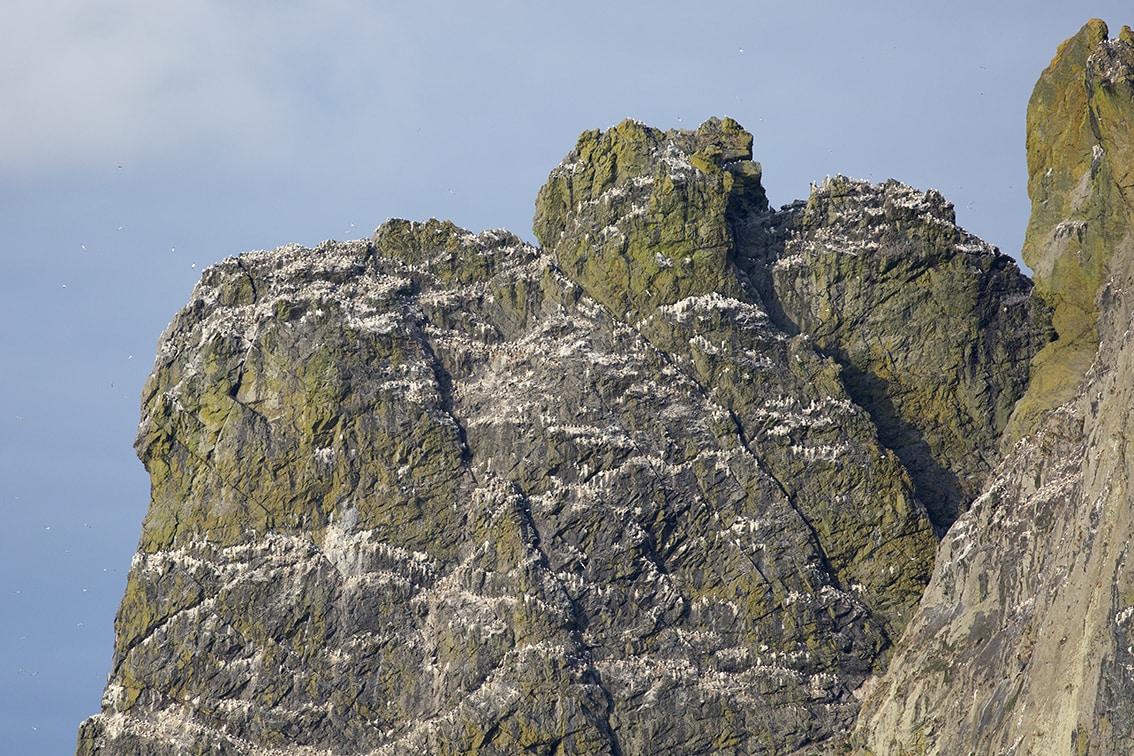 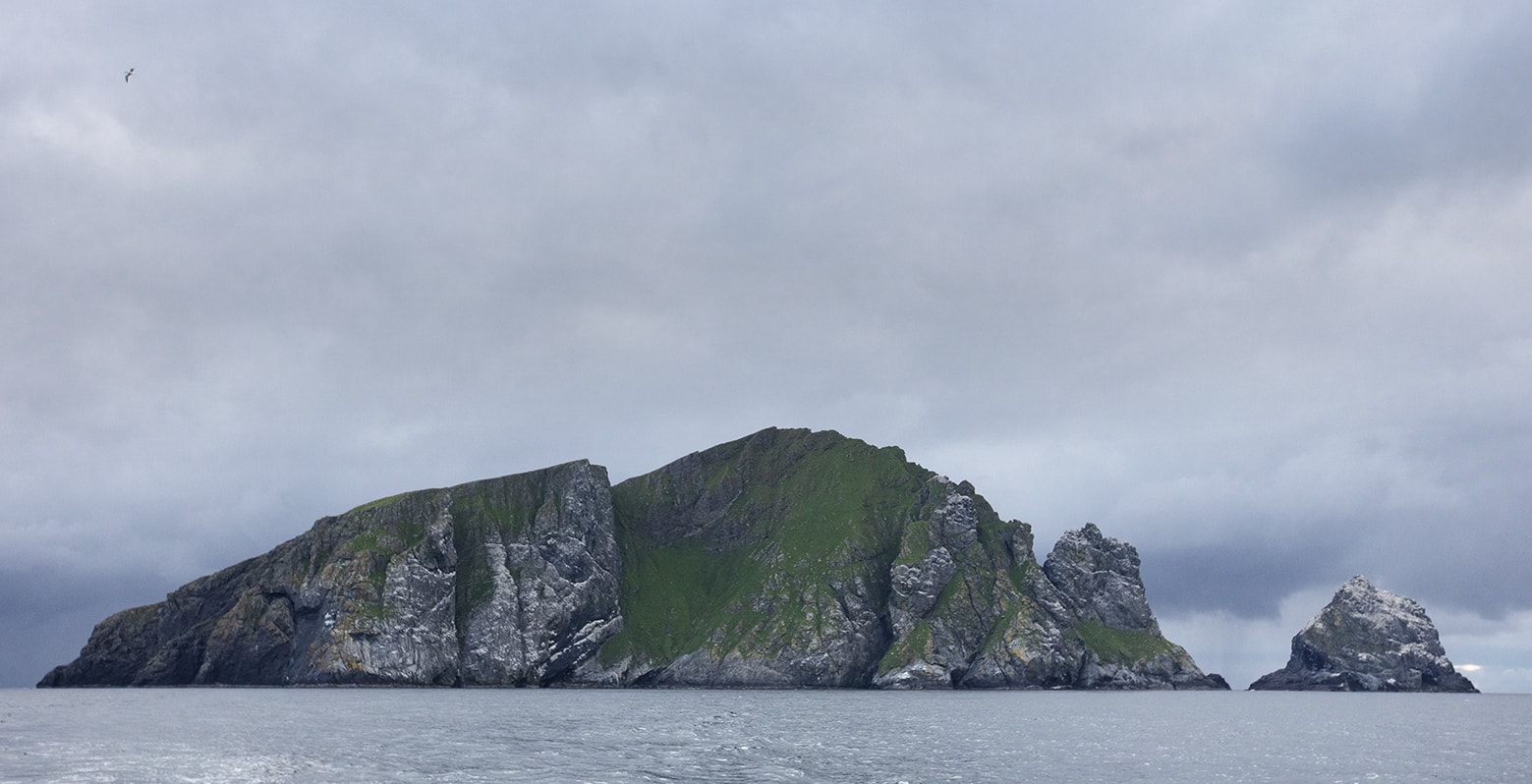 Above is the vertiginous and craggy eastern side of Boreray with Stac an Àrmainn on the right.

Below is a photo taken while leaving Hiort ahead of a coming storm, in which you can see from left, the southern tip of Dùn, the eastern side of Hirta with the its hills of Oisebhal, Conachair (at 430 metres, the highest point of the archipelago) and Mullach Mòr. On the right is the 240 acre island of Soay, rising 340 metres high.

A final view shows all of the islands in the archipelago with the storm having arrived on Soay. 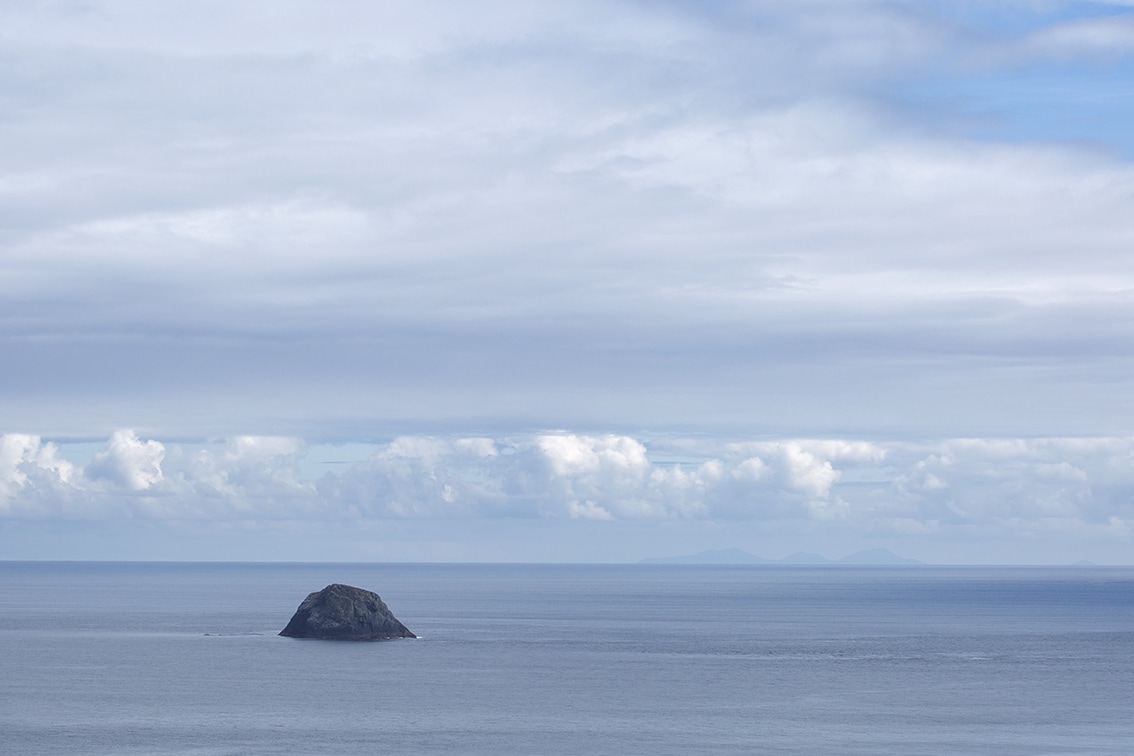 It is not always stormy in Hiort. Above is a view of Levenish from Gearraidh Àrd with the hills of North Uist roughly 40 miles away, clearly visible on the eastern horizon.

Below are two views from The Gap on Hirta. On the left, looking east to the Sound of Harris and on the right looking north-east to Stac Lì in the foreground with Stac an Àrmainn behind. 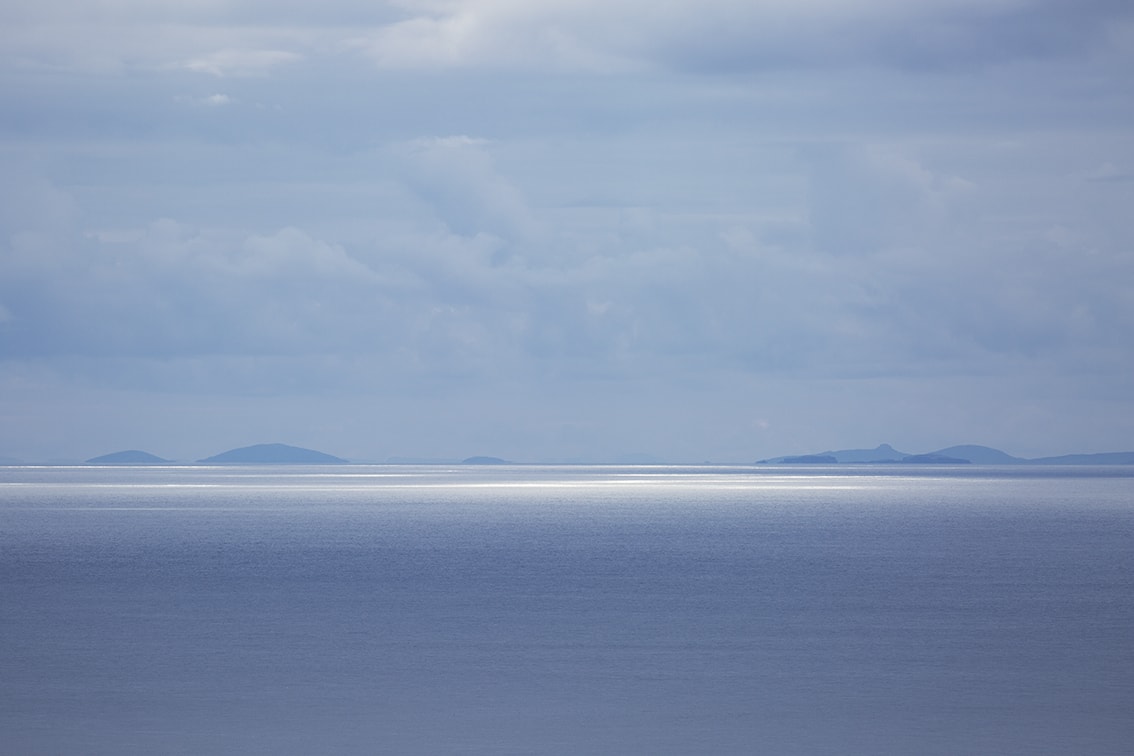 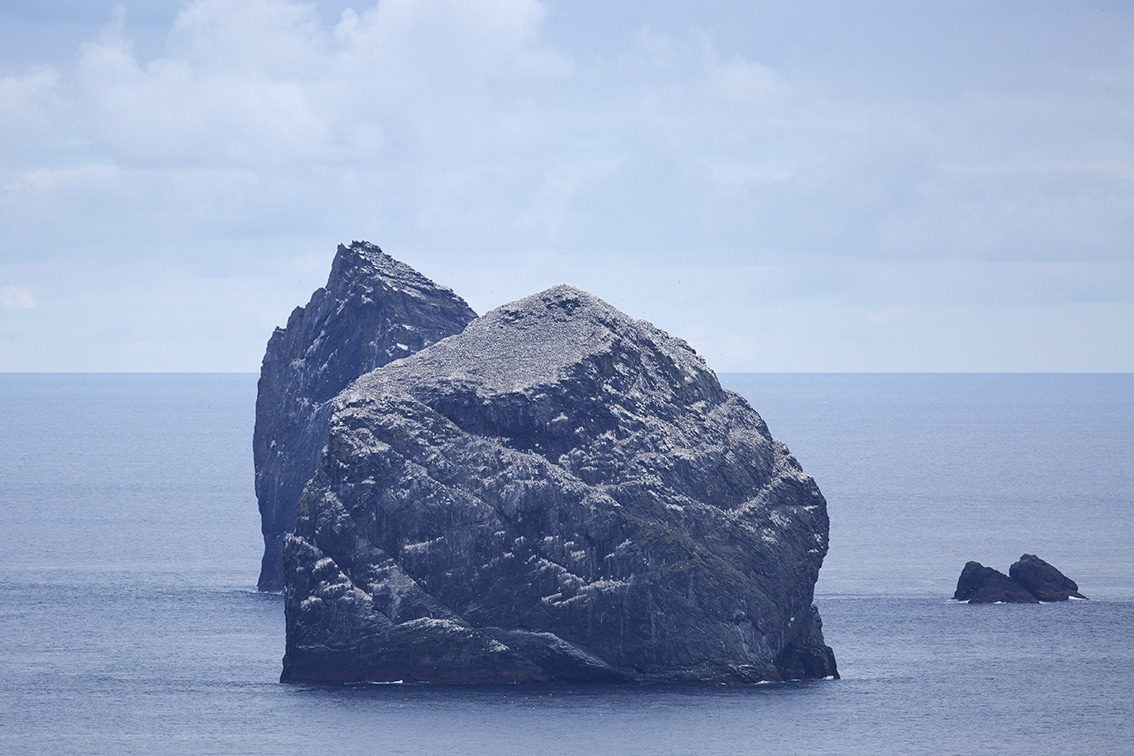 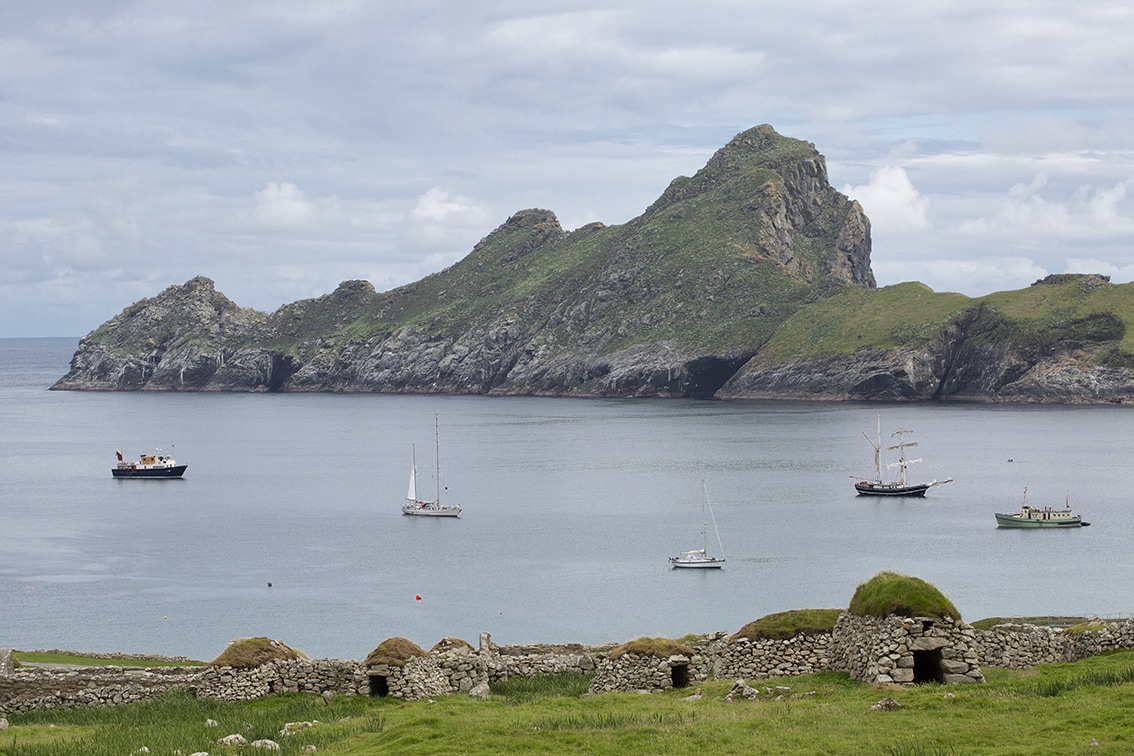 The island of Dùn serves to shelter Village Bay from the worst of the south-west storms. Its distinctive jagged outline is reminiscent of a worn, toothy jaw. There are numerous caves and tunnels, some just wide enough to pass through on a small boat as shown below. These caves and tunnels give a hint of its underwater wonders such as the Sawcut – a narrow cut of one to three metres wide and twenty six metres deep which slices sixty metres straight into the island. Its walls are sheer and covered with colourful anemones and corals. 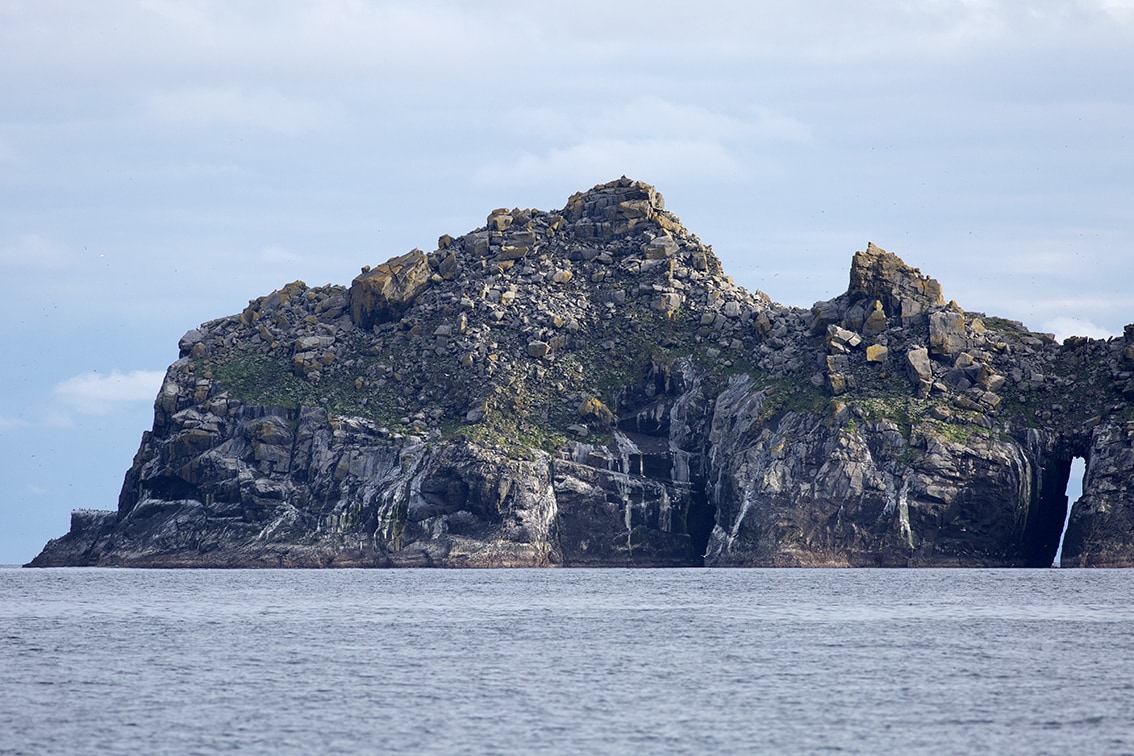 A steep climb up from Village Bay to Am Blad is necessary in order to catch sight of Soay which lies a few hundred metres off the north-western tip of Hirta. Here on a moody day, the green top of Soay can be seen in the distance with the western slopes of Gleann Mòr in the foreground. A closer look reveals sheep folds on the slopes of Hirta and some of the cliffs and green stretches of grass of Soay which have sustained the native sheep for millennia. 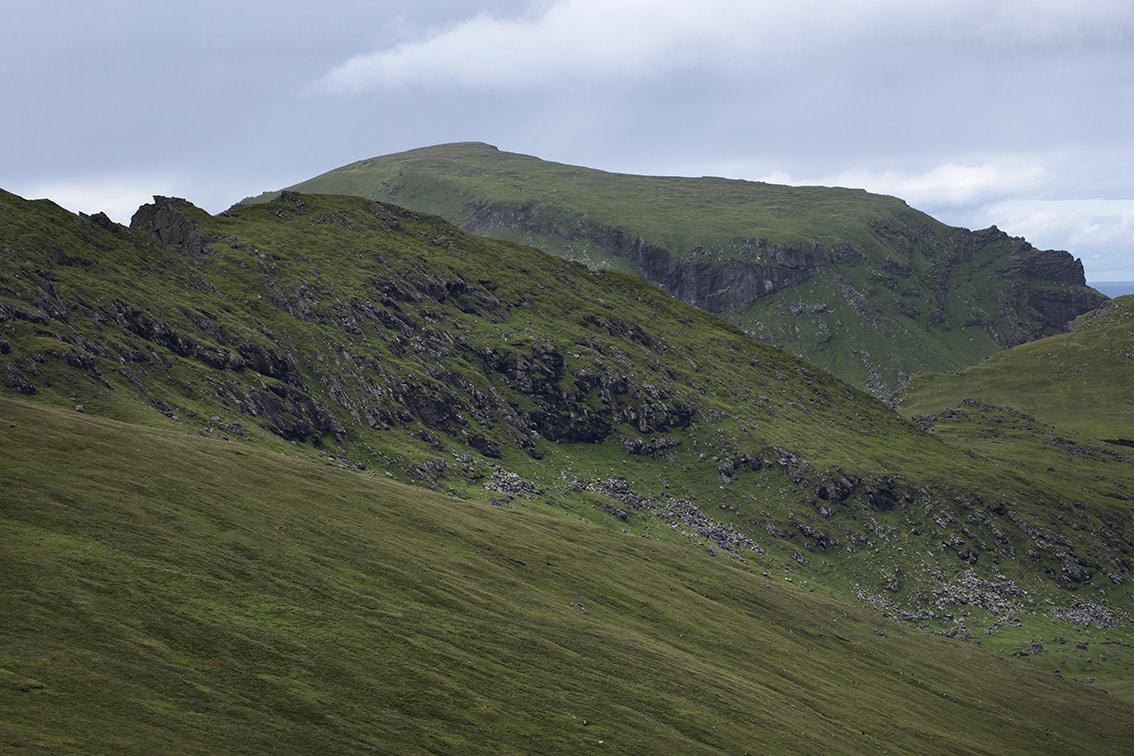