Anyone lucky enough to land on the main island of Hirta will not have to travel more than a few footsteps to see the ancient breed of Soay sheep; they roam free throughout the whole island, from Village Bay to the top of the hills and into the Gleann Mòr, and on the precipitous green slopes and ledges of the island’s huge cliffs.

Although Soay is separated from Hirta by a channel only five hundred metres wide, the Soay sheep population on Hirta is a very recent chapter in the history of these remarkable animals. 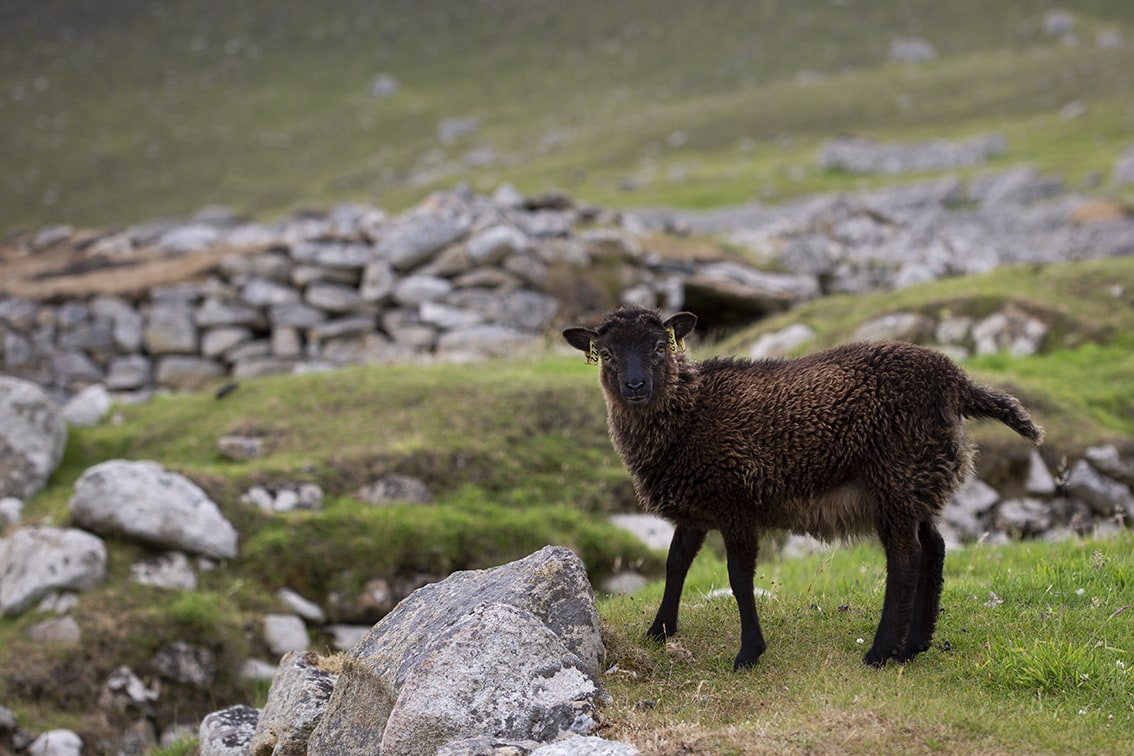 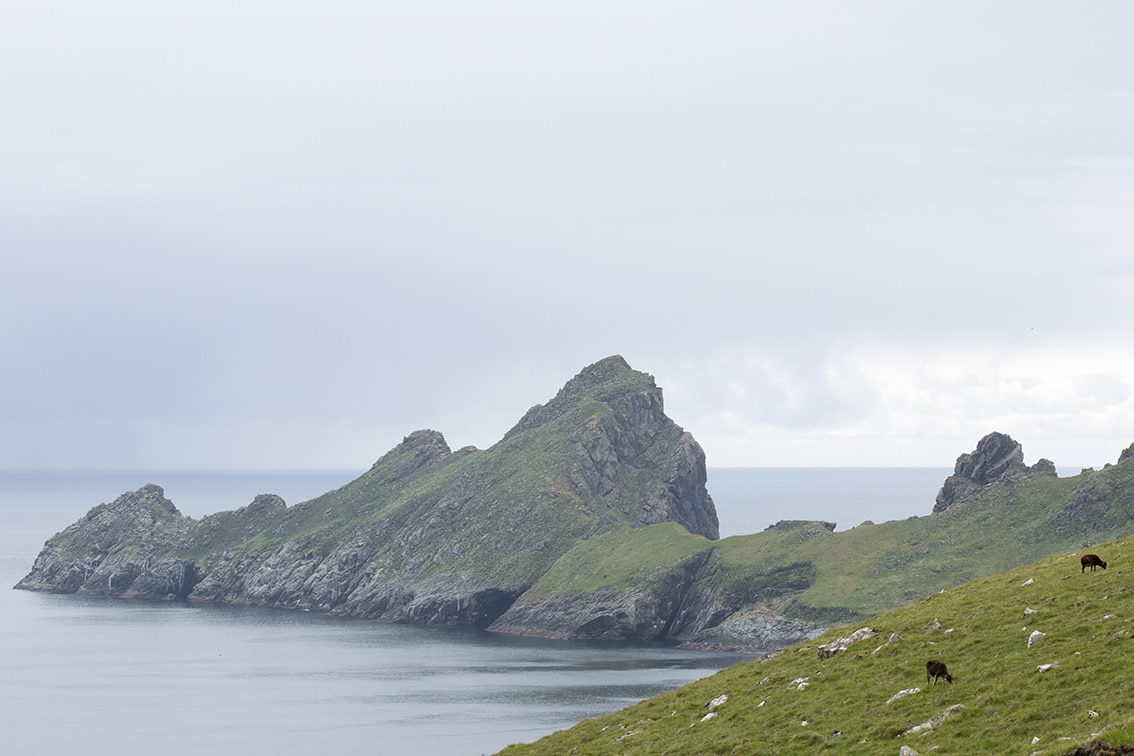 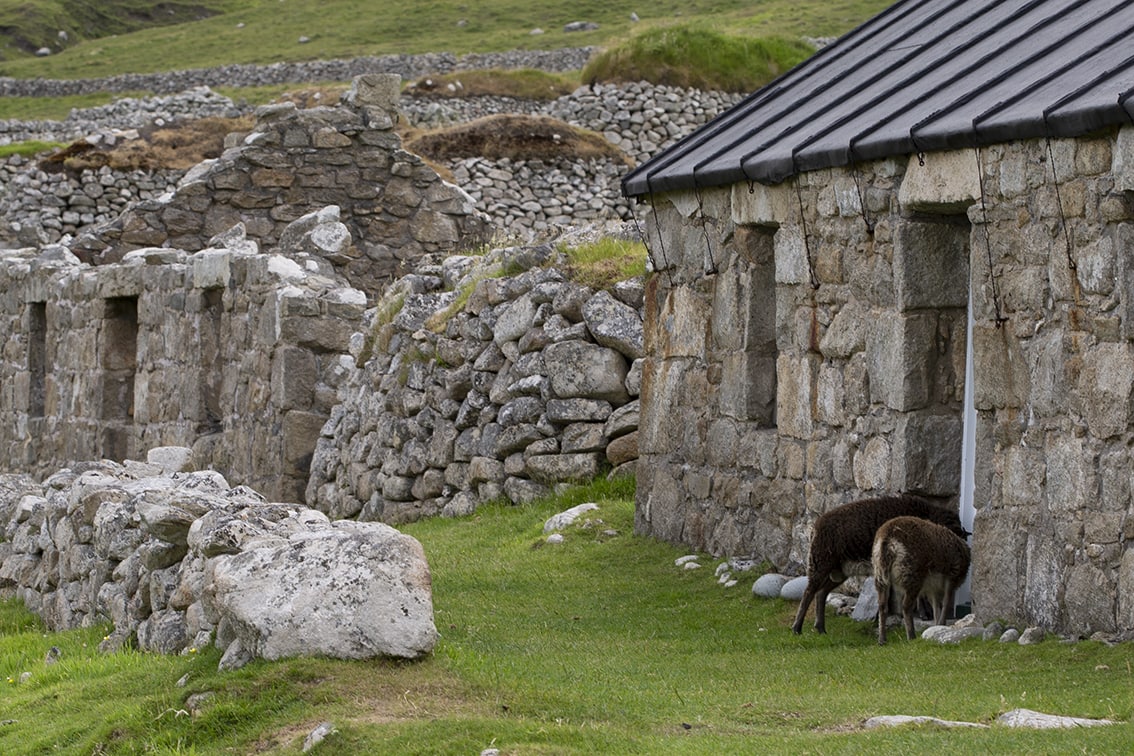 Soay sheep and lambs in and around Village Bay 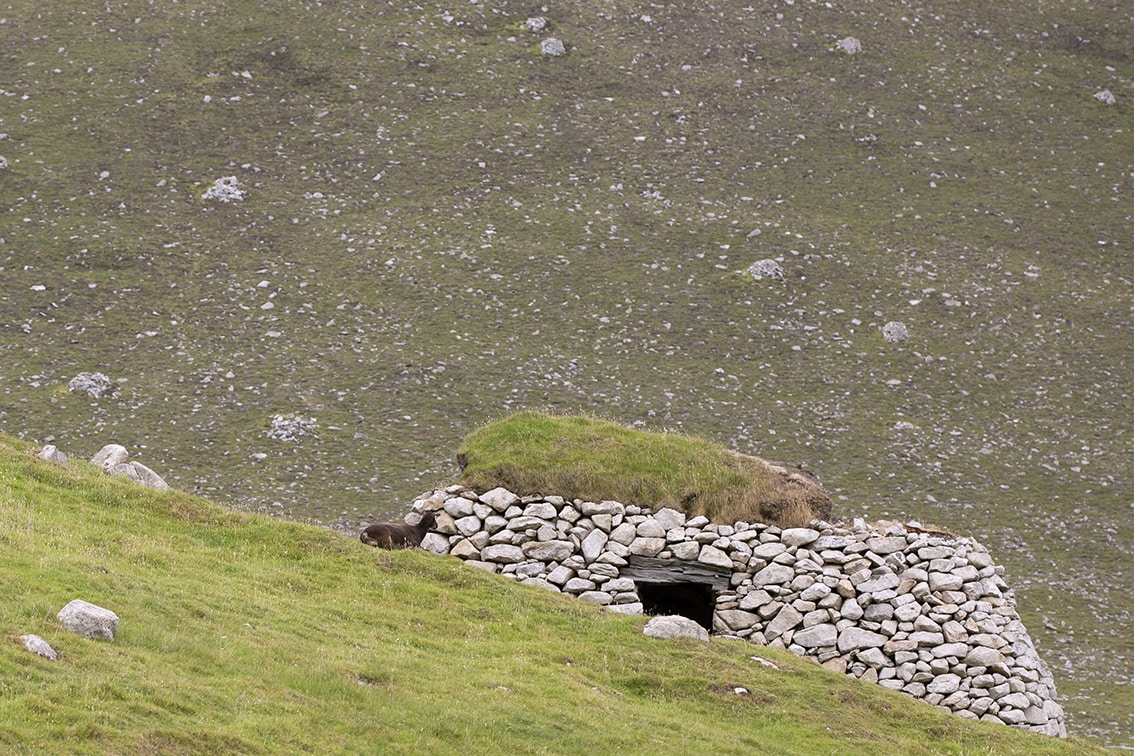 The records show that the islanders kept a different breed of domestic sheep. In the mid- nineteenth century the Hebridean blackface was introduced. These animals were a cross between the Scottish Tan Face and the Scottish Blackface. They were larger than the Soay and grew creamy white wool coats. The tenant islanders kept their sheep on Hirta and Boreray, whilst the Soay sheep, which belonged to the proprietor, lived separately on their native isle of Soay. The islanders frequently went there for fowling and to roo (pluck) the Soay wool in summer. When the islanders were evacuated in 1930, their sheep on Hirta were gathered and transported to the mainland and sold by Government order with the intention of defraying the costs of the evacuation. Yes, the UK government really was that parsimonious. Their sheep on Boreray were left behind and became feral; this tiny flock are now known as the Boreray breed and are the last genetic remnant of the now extinct Scottish Tan Face.

The Soay sheep fared better than the Boreray when their territory was expanded to include Hirta. In 1931 Macleod of Macleod sold the archipelago to Lord Dumfries and the new proprietor had different plans for his new possessions. These included transferring enough Soay sheep to Hirta to start another flock to graze the now empty land. This was easier said than done as it involved carrying sheep down the vertiginous cliffs of Soay to a small boat in heaving seas. It is no surprise that the new laird had to call on expert cragsmen from Hiort to get this job done. My neighbour Mae’s brother, Calum Macdonald, was one of those selected for the task, along with his uncle Finlay MacQueen, still the consummate cragsman at age 70. Seven other men, and two of their wives, completed the work party; they boarded the SS Hebrides and sailed from Harris to Hiort in June 1932. They cleaned out their old homes and stayed throughout the summer whilst they transferred one hundred and seven sheep across the Sound of Soay to Hirta. I have seen a photograph of Calum engaged in this task with two sheep, all feet expertly roped together and slung over his shoulder so that one sheep hung down his back whilst the other was cradled in his arms as he walked straight down a precipitous slope to the sea. By Calum’s account they had the happiest of times that summer, though bittersweet in that they had to leave Hirta yet again and go their separate ways. Just before leaving they held a final service in the old church and spoke of the past and of their relatives lying at rest in the cemetery. Calum noted that they did this, “knowing that none of us present at that moment would ever lie beside them.” He further commented that, “it was a sad service but so very true of the people who had lived from generation to generation in a world of their own making.”

It is hard to imagine that anyone other than those born to life on the Hiort archipelago could have performed the feats required to bring the animals across from Soay and so I think we owe them a great debt in that we can now see these beautiful sheep at close quarters. Soay itself has no safe landing point and is out of bounds to unauthorised visitors. The Soay sheep that graze in Village Bay are wild animals but are now well-used to humans wandering around the village and it is possible to get very close to them. I was highly tickled to have several ewes with lambs courteously allow me just enough space to pass as we met on the village street.

The visitor need only take a walk around Village Bay in order to see the different types within the pedigree breed. The classic Soay sheep is known as the Dark Wild type, having a dark brown body with a light belly and rump and light hair around the eyes. There is also a Dark Self which is a uniform dark brown. The Light Wild has the same light areas as the Dark Wild but with a pale fawn coloured body. There is also a small proportion that have variable amounts of white on their bodies. They shed their fleeces naturally in the summer and are not prone to the problems of flystrike as domestic breeds are when left unsheared. 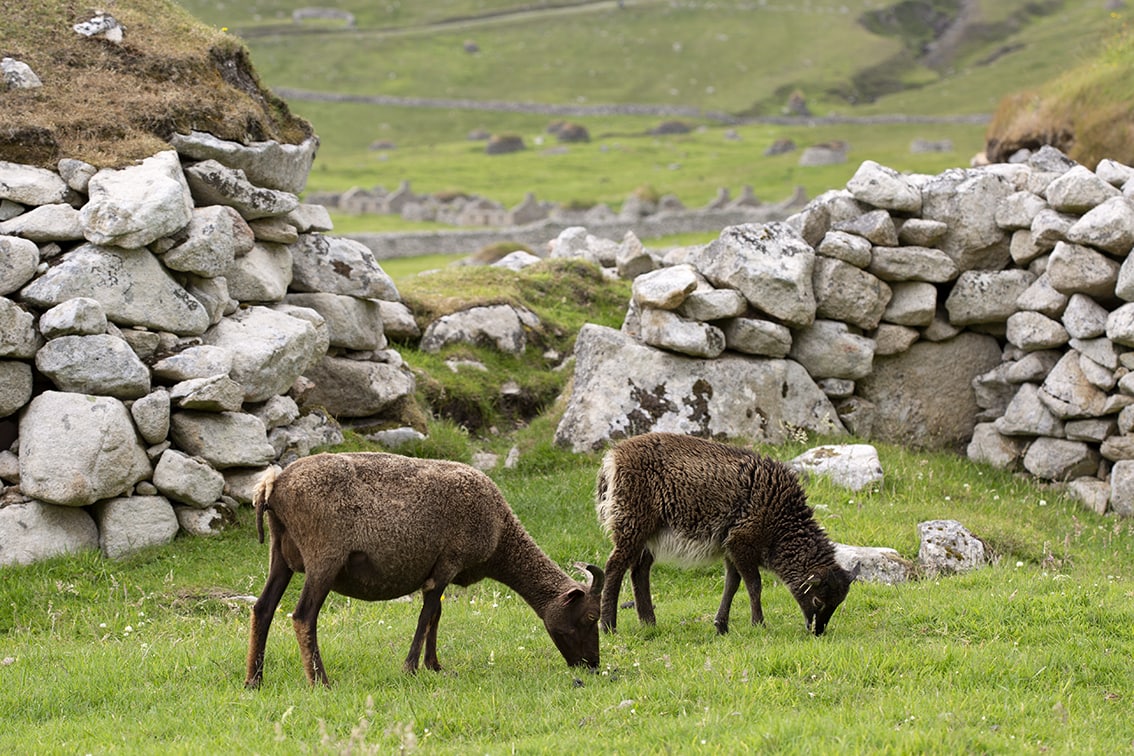 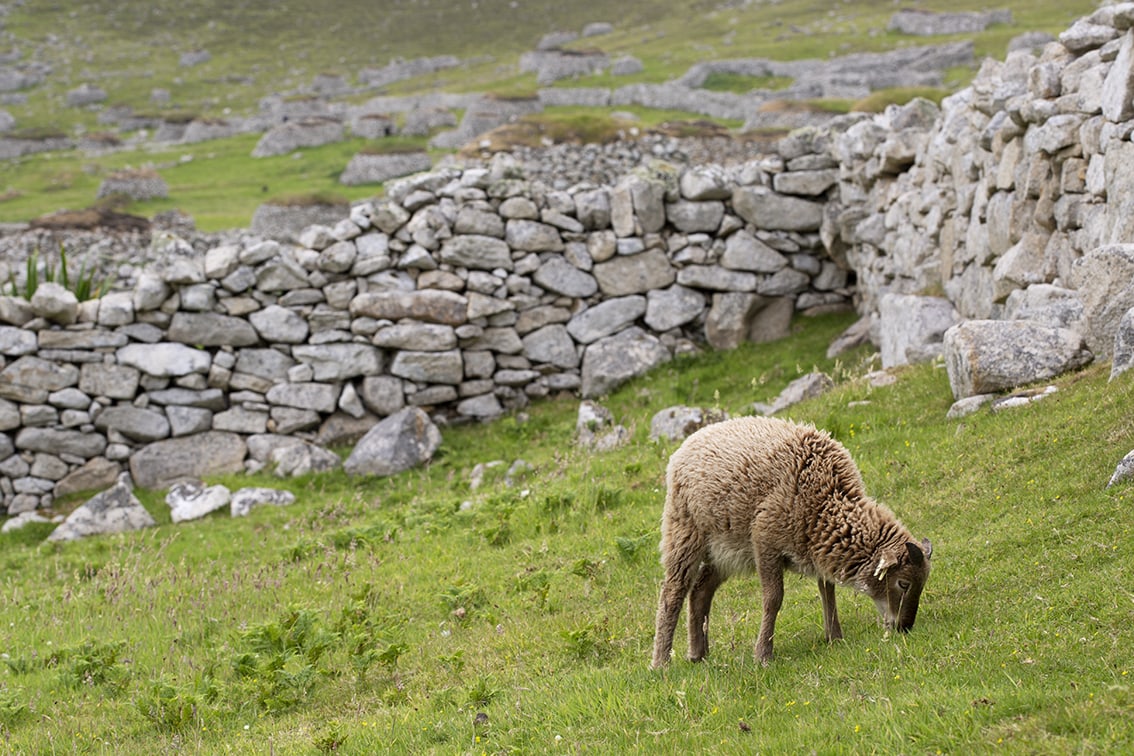 Above left - A Dark Self ewe and a Dark Wild lamb grazing in one of the stone enclosures.

Below - A Light Wild lamb with its Light Wild mother, in the process of shedding her fleece. 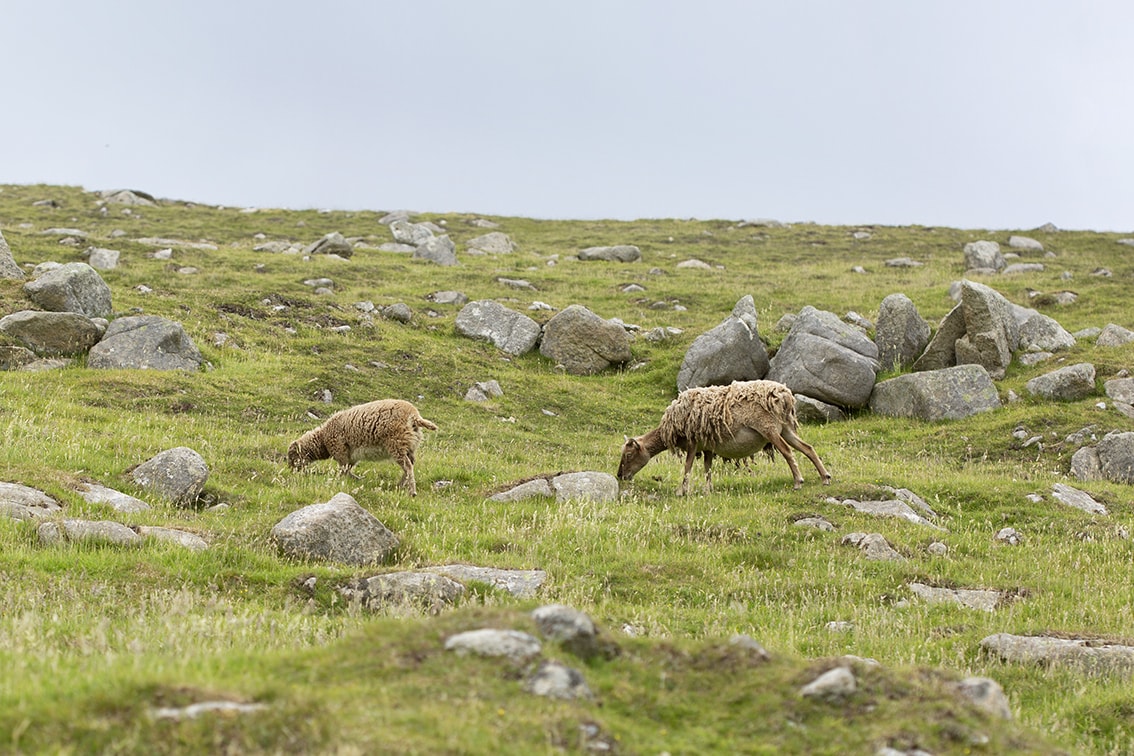 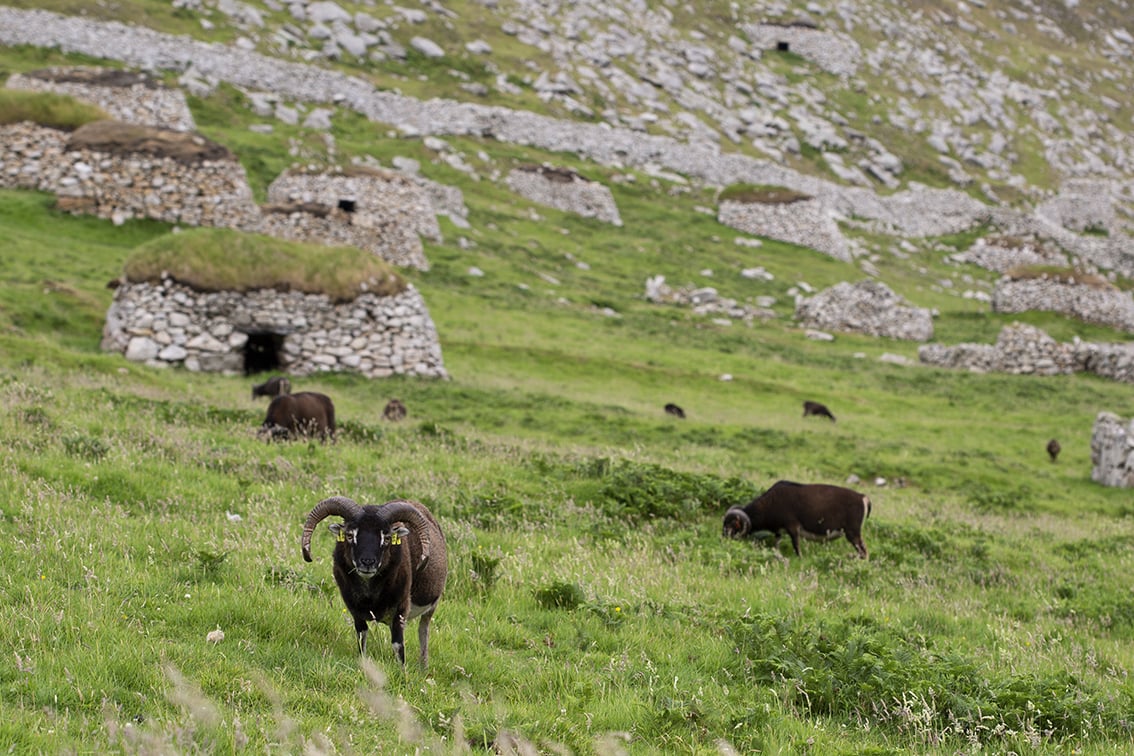 There are three different horn types. The normal ewe has two back-curving horns, whilst the normal ram has a pair of large curling horns (see above). There are also scurred animals which have small and often misshapen horns, and 28% of females are polled (having no horns).

I have spent my life surrounded by domesticated breeds of sheep on the Isle of Lewis and I am very familiar with their habits and with the cìobaireachd (shepherding), so it was fascinating to observe how wild sheep manage themselves without any human input. Jade and I were observing the tranquil scene in Village Bay one evening, with ewes and lambs scattered and grazing the green grass of the old croftland. Suddenly, around 9pm and for no apparent reason, all of the animals gathered together and formed a procession, making their way in a body up to the Gearraidh Àrd. It was as though a bell heard only by Soay sheep had rung calling out bedtime. At around 5am the following morning, the magical mystery sheep bell seemed to have rung reveille, and we watched them streaming back down the hillside and spreading out around Village Bay for another day’s grazing. We had also observed small bachelor groups of rams grazing hard then resting together in their particular home ranges on the hillsides. 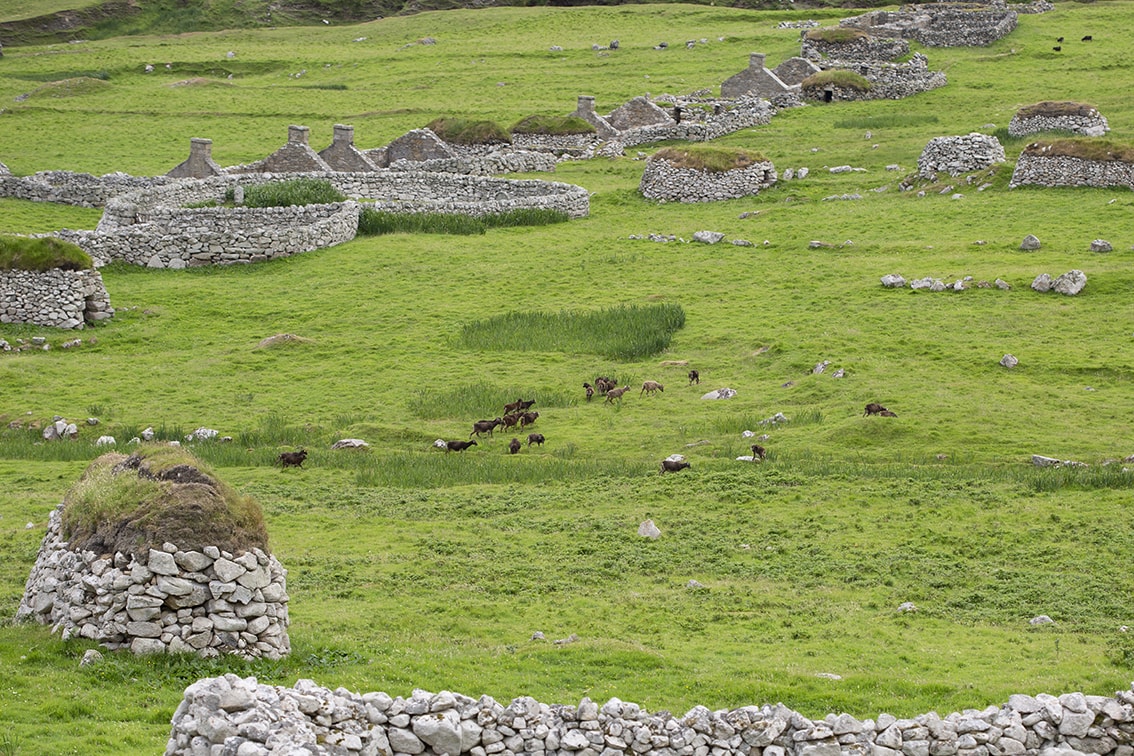 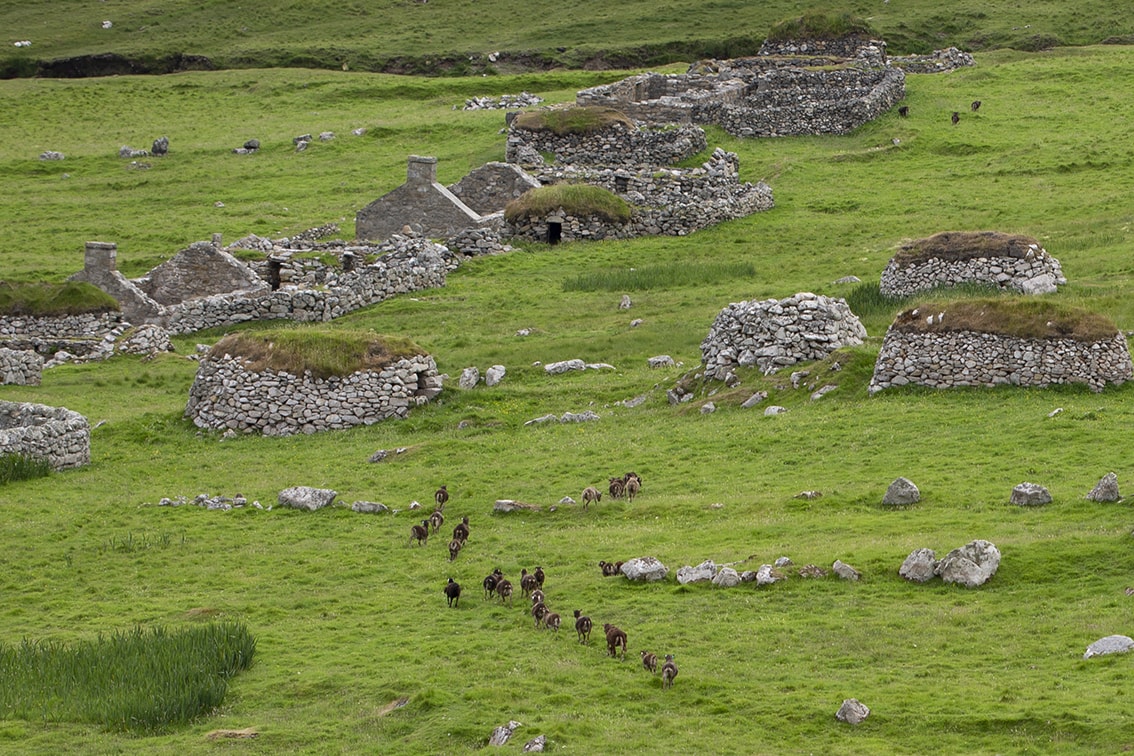 Above left & right - The sheep gathering together and leaving the village in the evening.

Below Left - A ewe with normal back-curving horns.

Below Right - An elderly polled ewe. 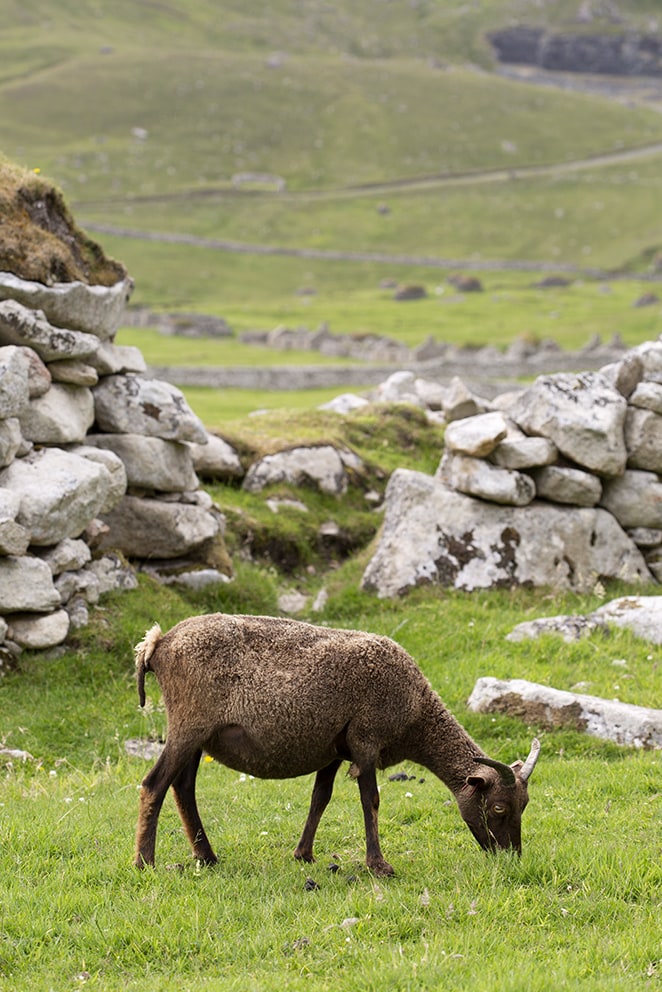 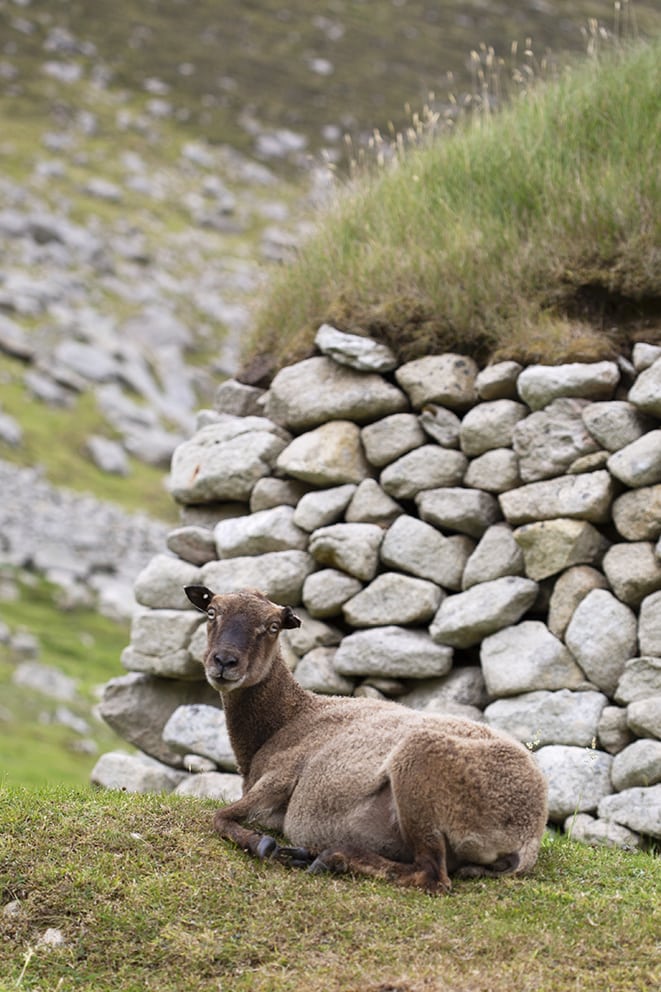 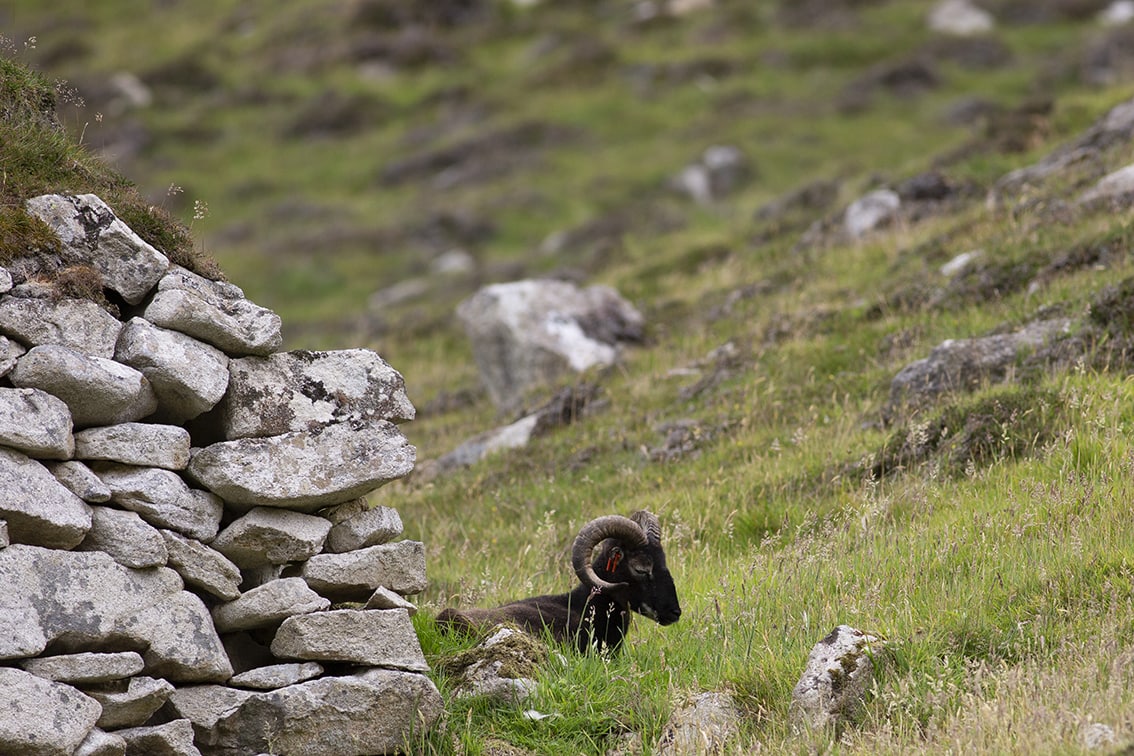 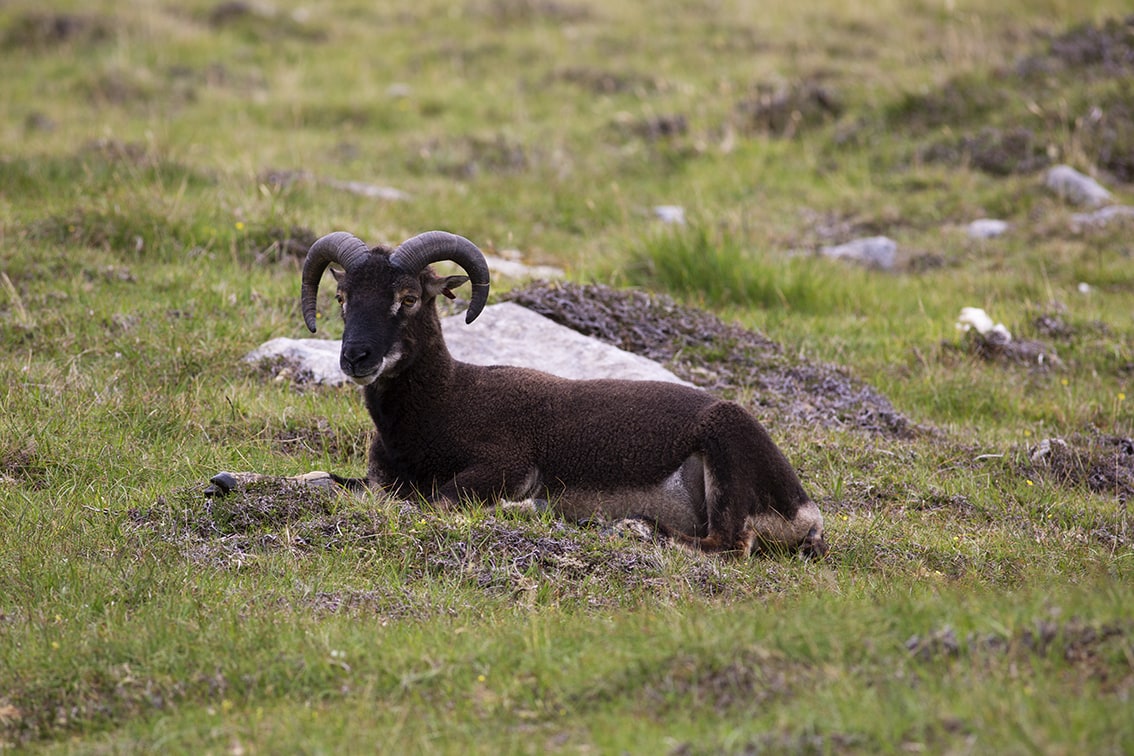 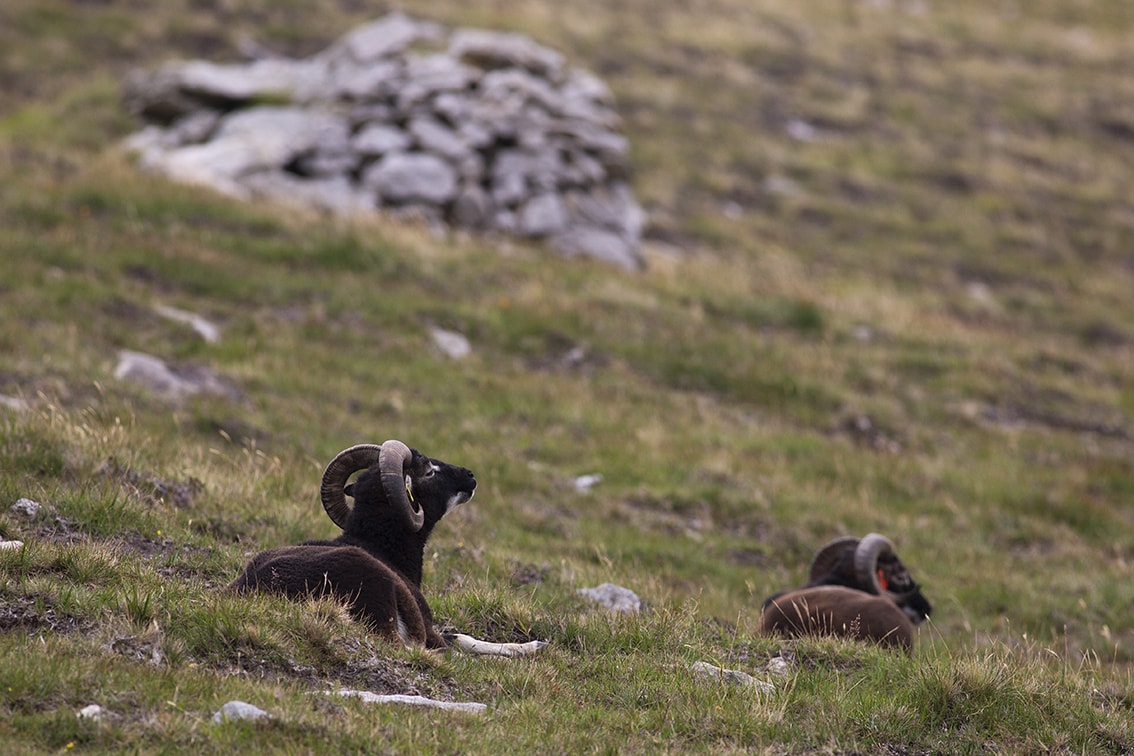 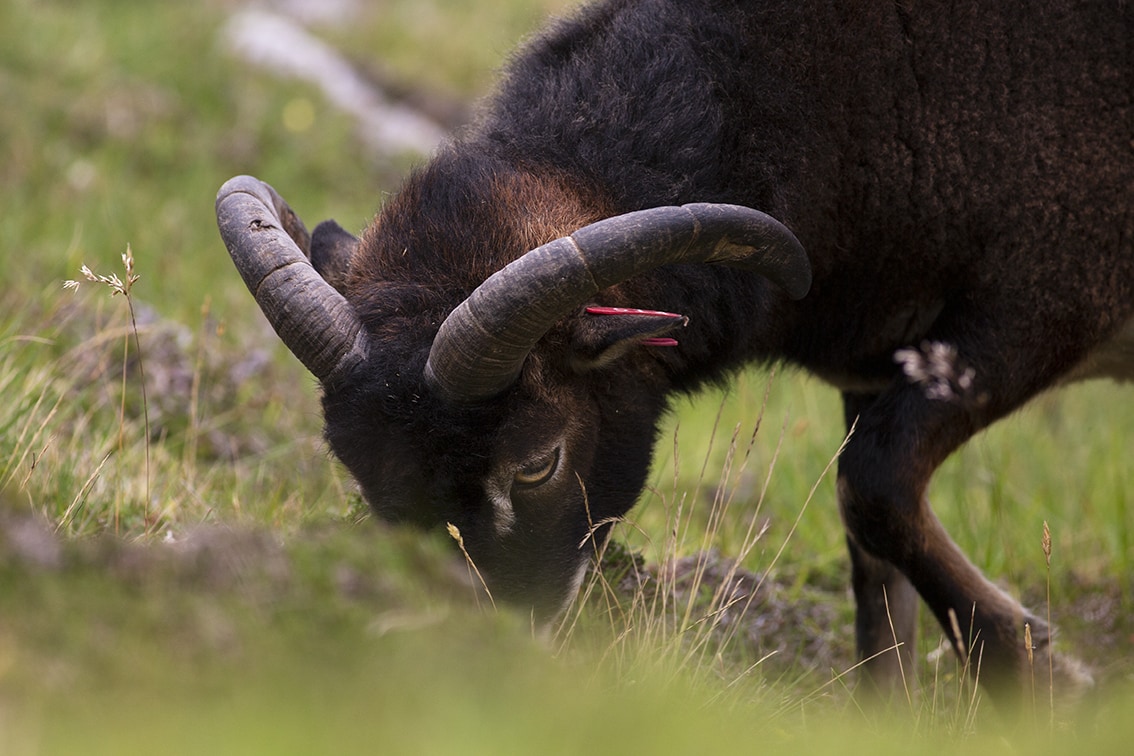 Above - Dark Wild rams resting and grazing on their hillside home range. 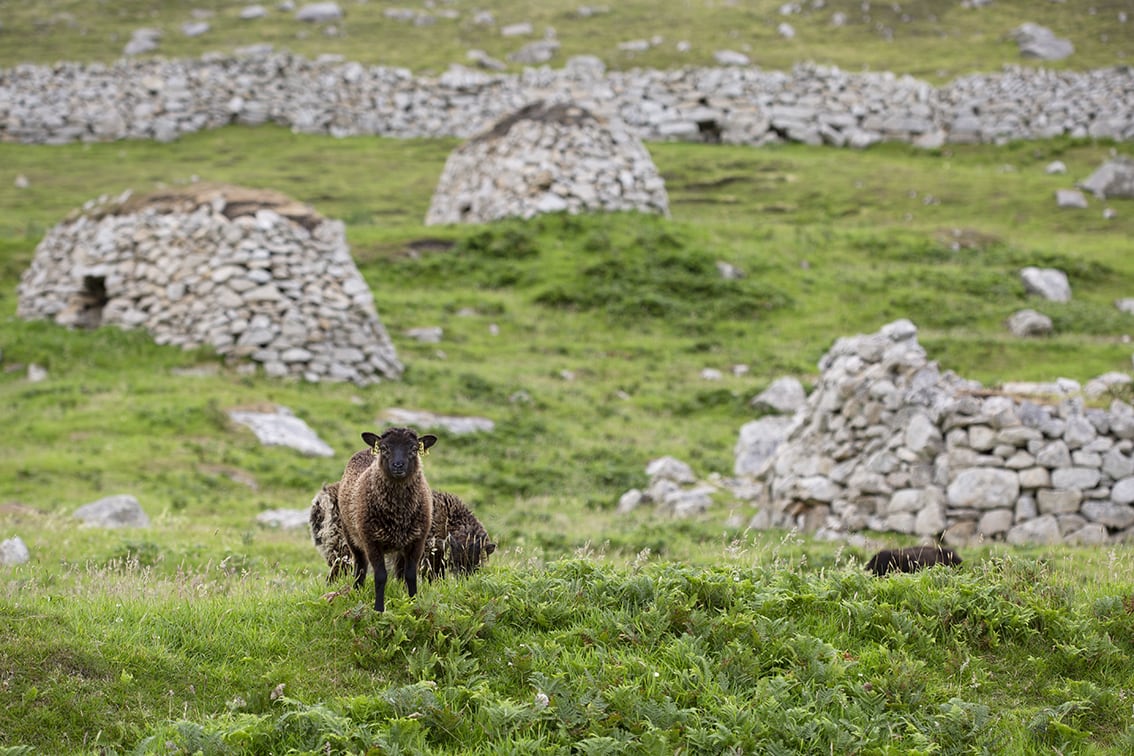 We were on Hirta in July and so we saw the sheep at the height of the summer grazing. Their lives and their behaviour are dictated by the seasons and by autumn the rams have put on maximum condition and grown their horns. This is when they begin to compete for dominance through bouts of head-butting that increase in intensity throughout the rut, which takes places from the end of October through November. Meanwhile, the lambs have weaned and the ewes are ready to mate. This activity is all over by December and the following four months are the hardest time for all. The rams have lost condition from their exertions and the finite source of vegetation has ceased to grow. The winter weather brings rain, wind and frequent storms. Mortality is high and particularly so at both age extremes along with those in poor condition. This is the nature of life in the wild and the Soay sheep of Hirta have presented a remarkable opportunity for detailed ecological study. An annual sheep count has taken place most years since 1952 and these counts reveal that the sheep on Hirta have unusual population dynamics: the population rises to near maximum and then crashes at irregular intervals. Crashes can produce a mortality rate of as much as 70% of the population. These crashes have been of great interest to ecologists and the first phase of ecological research into the population dynamics began in 1959 when some sheep were tagged in order to follow the course of their lives. Though the research was ahead of its time, when it ended in 1967 the causes of the crashes were still unclear.

In 1985 further intensive research began when ecologists from Cambridge University tagged all of the sheep in Village Bay. This meant that the lives of each individual animal could be followed. The causes of the crashes are now known. Briefly, the population dynamics are the result of almost all mature ewes conceiving and lambing successfully each year regardless of flock density. This means that the population can rise to a degree well beyond the winter carrying-capacity of the island. Particularly severe winters combined with a high proportion of vulnerable lambs and males make a crash most likely. 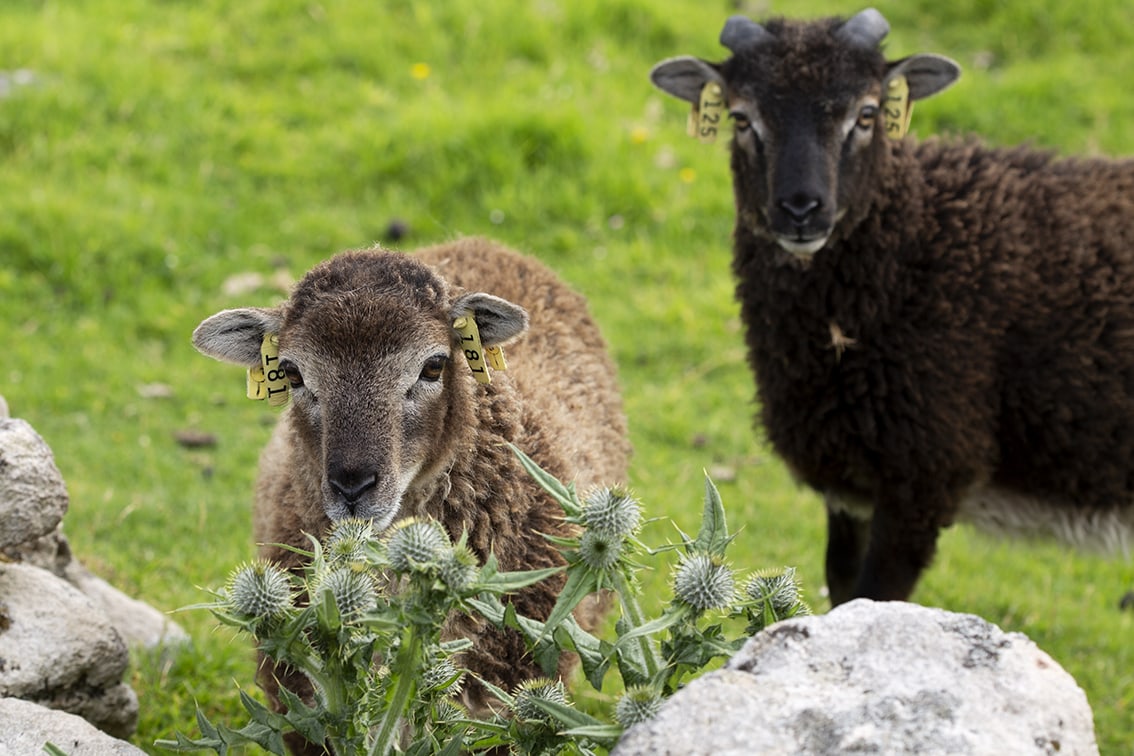 Above - A Light Wild female lamb and a Dark Wild male lamb.

Below - A Dark Self lamb. 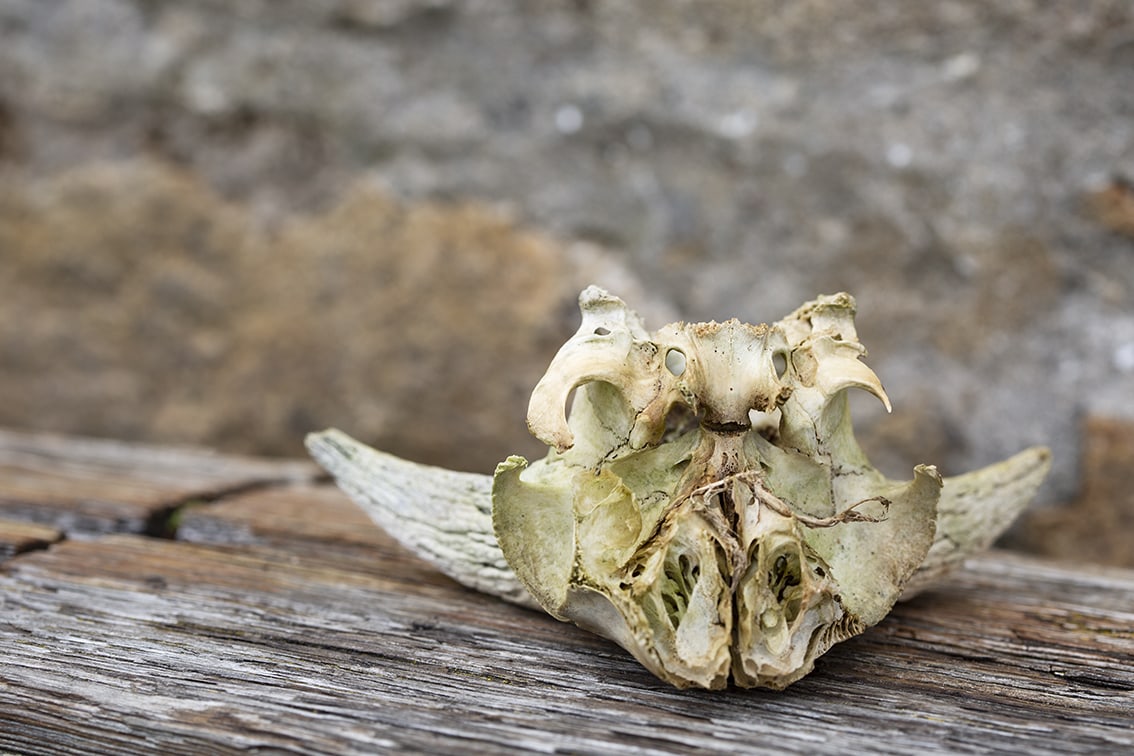 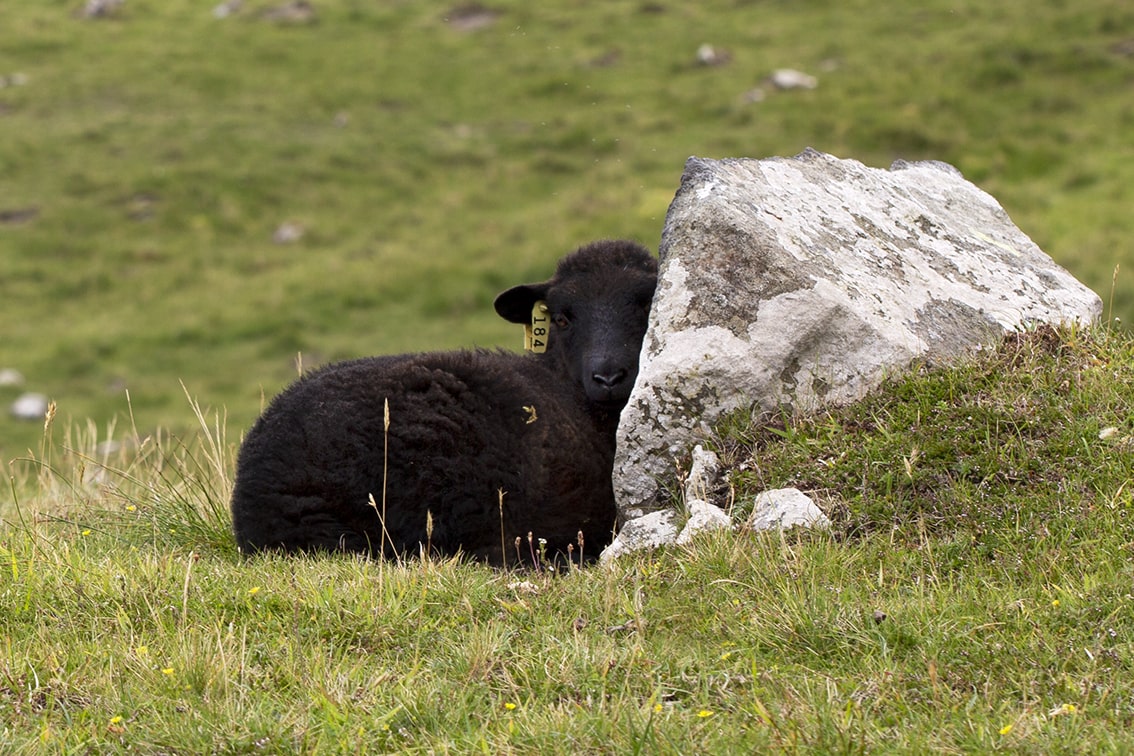 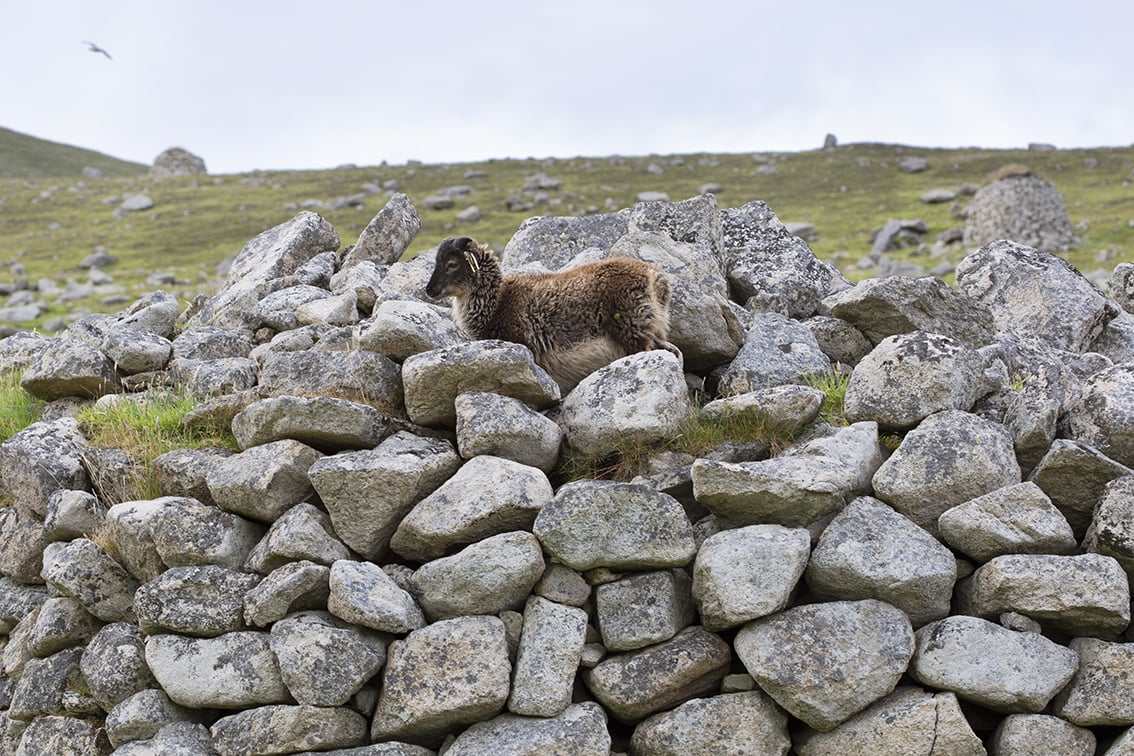 The Soay Sheep Project is the longest-running Large Mammal Research Project ever conducted. Important detailed research is ongoing and is run by Edinburgh University and Imperial College London along with other participating bodies. The lambs in Village Bay have been tagged every year since 1985 and a huge amount of data has been gathered, allowing valuable findings regarding population ecology, evolution, genetics, vegetation, climate change, parasites, immunology and ageing.

All of the research is fascinating, not least that of ageing. Soay sheep are in their prime from age 2 to 6 years. Beyond that they decline annually in fitness but they have been found to do so at notably varying rates and in different ways. Finding the reasons why individual Soay sheep differ in when and how they age, and how genes and environment affect the process, will be invaluable in understanding the reasons for variations in lifespan of mammals living in complex environments.

I am sure that these considerations were not at the forefront of 24 year-old Calum Macdonald’s mind as he carried the sheep of the source flock down the cliffs of Soay, but as a man whose first employment when he left Hiort was to lay electric cables in the town of my birth I find it not so surprising that he played a vital part in yet another aspect of modern life.

I ended my visit to Hiort last year with a visit to the cemetery to pay tribute to him. Calum died in London in 1979, aged 71 years. It was his greatest wish to be with his ancestors and his family were granted special permission to have his ashes buried there. It is fitting that he should rest in the home he referred to as A Far Better Place. 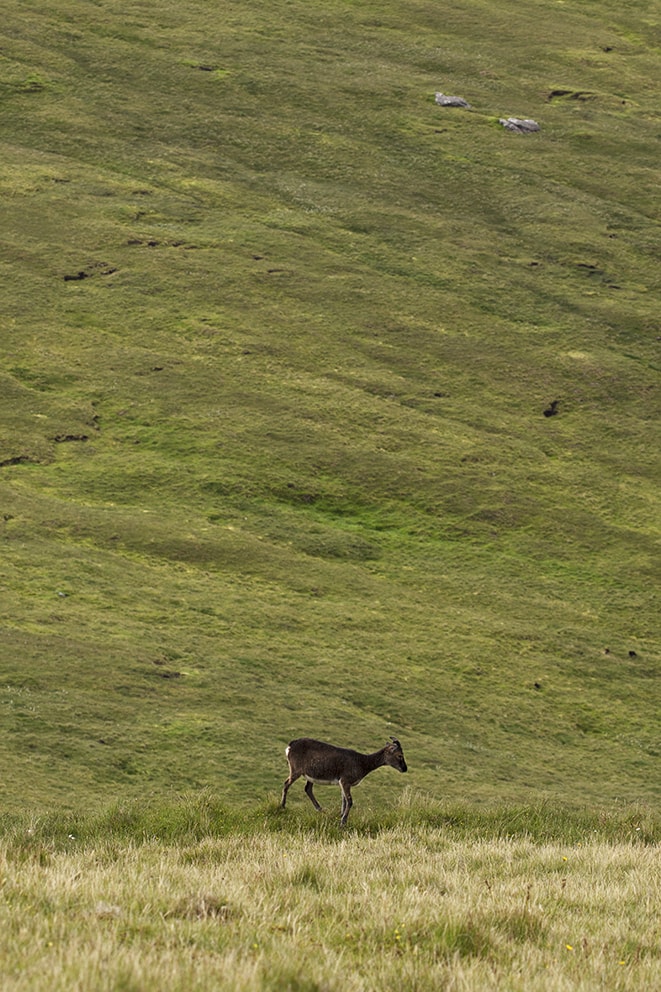 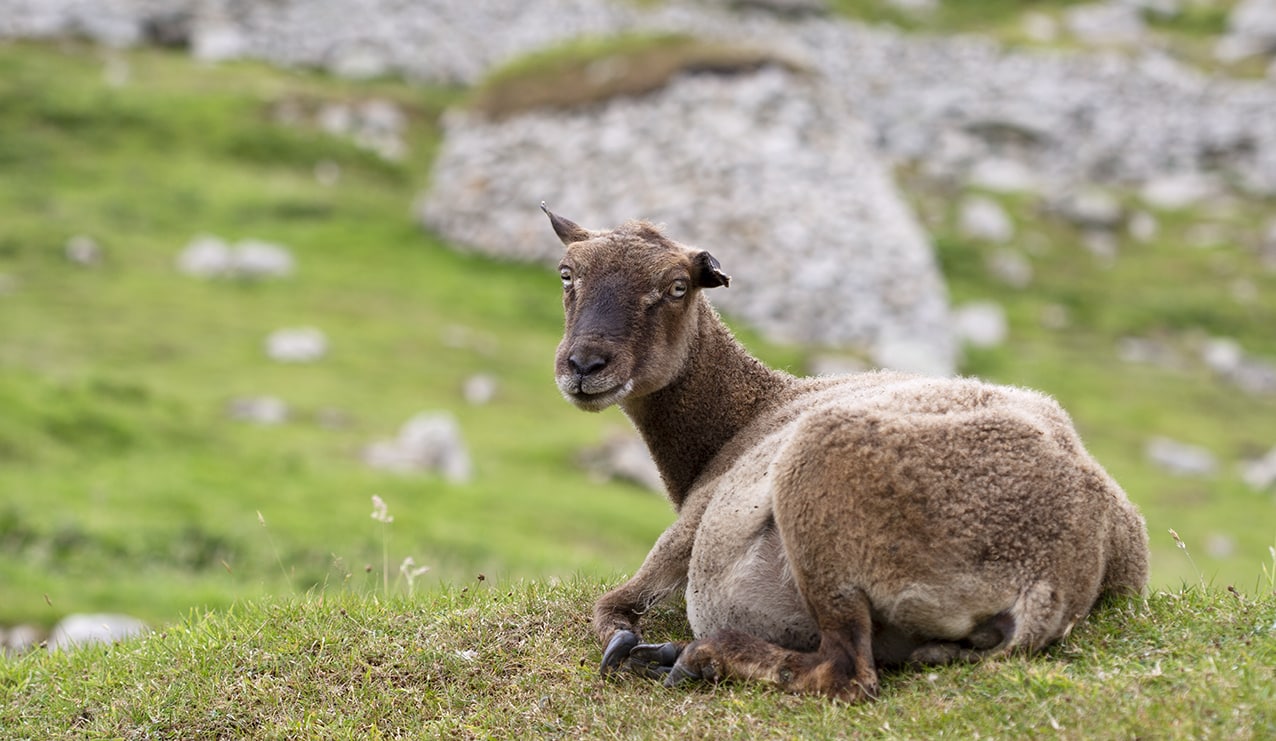