Alice Starmore Hebridean 3 Ply Yarn is made from premium quality pure new British wool, dyed in the fleece and skillfully blended into unique shades. It is hand-washed and dried in the Hebridean air, and supplied in hand-made skeins which may vary in weight. It is priced per 50g at standard conditions. All yarn is weighed to order on balances that are checked daily to ensure that you receive the correct total amount.

Tormentil is part of the Moor & Mountain range, which is inspired by the landscape of the Outer Hebrides.

The Covid 19 crisis has seriously affected postal services across the world. Up until this point commercial passenger flights were utilized for package transportation, especially in larger countries such as the U.S.A, Canada and Australia. With the huge decrease in passenger flights this method is no longer possible, and delivery companies are having to find alternative transportation, which is driving costs up and slowing delivery times.

All of our International packages are sent by Royal Mail Tracked, which is an expensive service that allows packages to be logged more carefully within the delivery system. The cost of all Royal Mail services have increased because of the Covid 19 pandemic. To give an example, last July sending a patterncard kit such as Henry VIII internationally would have cost £8-10. From now onwards it will cost £18-20 not including packaging.

This scale reflects the fact that larger orders will go in separate boxes. For example, an order of £350 will be sent out in three separate packages costing us roughly £15-£20 each, not including packaging.

All of our UK parcels are sent by Royal Mail 1st Class. Shipping times within the UK are relatively normal at the present time, with packages taking 2-3 days on average. Postage and packaging costs have risen but we are not expecting our UK customers to cover the entire cost of their order delivery. We will continue to pay part of your postage and packaging costs, but we are asking our UK customers to contribute to their shipping costs as follows –

This scale reflects the fact that larger orders will go in separate boxes. For example, an order of £350 will be sent out in 3 separate packages, each costing us roughly £5.50-7.50 each, not including packaging.

Alice Starmore Hebridean 3 Ply yarn is an artisan product and is hand-skeined. The skeins may vary slightly in weight. It is priced per 50g of 3 Ply yarn.

Each order is weighed to ensure that you will receive – at minimum – the full weight ordered, regardless of number of skeins. Our yarn is kept and weighed at standard nett conditions. Our balances are checked daily using analytical weights to ensure that they are accurate at all times.

Please note that all of our yarns are supplied washed and therefore do not require to be washed or fulled after knitting, unless you have an accident. Generally speaking, your garments should not require cleaning/washing any more than a coat would.

All of our designs are made with 100% pure new wool yarns and should be washed either by hand with pure soap in hand hot-water, or in a front loading washing machine which has a specific wool programme using a small amount of non-biological detergent. We do not recommend the use of any fabric softeners or any additives that will remain in the fabric after rinsing.

If hand washing, dissolve a small amount of pure soap flakes – or if using a pure soap bar, grate the required amount – into hand-hot water. Ensure that the soap has thoroughly dissolved before immersing the piece. Use a gentle squeezing motion to wash; do not cause any friction by rubbing or scrubbing as this will cause the fibres to felt. Gently squeeze out the excess soapy water and rinse well in warm water. It is important to remove as much excess water as quickly as possible as the longer moisture is left in wool yarn, the more likely it is to shrink or felt.

The best method for removing water is to spin in a washing machine, but if you prefer to remove the water by hand then gently squeeze the piece to remove the main water load and then lay the piece flat on towels and roll up, squeezing out as much water as possible into the towels. You will have to use several towels and repeat the process to remove as much moisture as you can.

In all cases, dry flat on towels away from direct heat/sunlight, and smooth gently into shape. You can place small towels – or even better, cut and finish old towelling into the garment shapes, such as sleeves etc – and place inside the garment so that the two layers are separate. This will greatly help speed up drying process.

For straight, dropped-shoulder pullover styles, a woolly board is an excellent method of drying as the garment is placed on the board and dried to size allowing air to circulate inside. The board can also be used for cardigans in this style so long as you tack the front bands closed using a strong cotton thread, which you then carefully remove once the garment has dried. Glove boards can also be used for gloves which will allow them to dry in perfect shape. 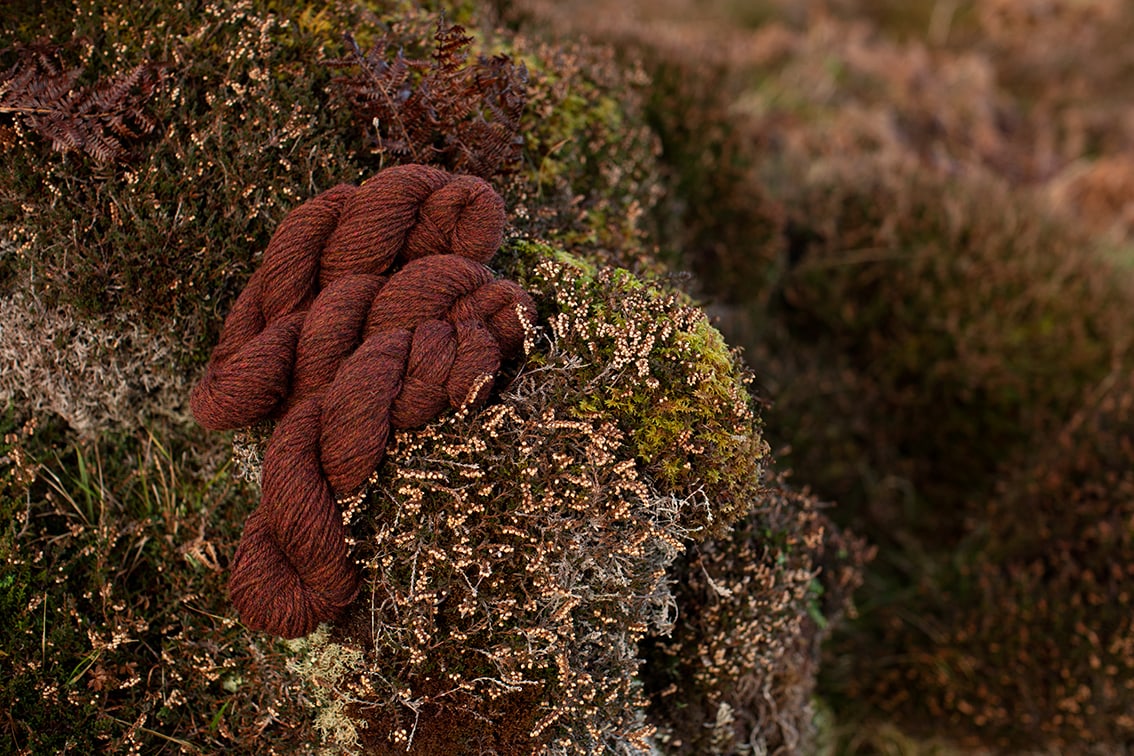 You will see this plant listed as Common Tormentil in the textbooks, but I think that does it a disservice, for it is uncommonly beautiful. Potentilla Erecta is its botanic name, but that is rather a mouthful for a plant with such a tiny flower. It grows on acid moorland, as long as it is not too wet, and thrives on the banks of the stream that runs through my garden. I love the way its yellow star-like flowers peek out of the grass for the whole of summer.

Dig under the delicate flowers and there is a world of interest, for the plant has reddish, tuber-like roots. These small tubers have a significance in Hebridean history, for their skin or bark yields a russet dye that was long used to colour nets, ropes and canvas sails for fishing boats. The boats I am referring to are the generation that preceded steam power, such as those known as Zulus, Fyvies and Sgoths which were used in the 19th century.

I have used Tormentil for small-scale dyeing. Small-scale, for the simple reason that the labour involved in barking the fiddly little tubers is monumental. How they scraped enough to do entire sails is utterly beyond me, and I am rather well known for my patience with fine work. I do not know who did most of this particular work, but I am endeavouring to find out. I really should have asked the old Stornoway "worthies" who may well have remembered facts from way back in their boyhood. However, when I had the opportunity to ask, I was a teenager with other things on my mind, and now it is too late. They are long gone, and Stornoway's old Ropework Park, as it was known, is now a parking lot and a gardening supply centre.

I badly wanted to capture the old colour of russet sails against clinkered timbers, and in our Tormentil shade, I believe I have succeeded. I have added a little extra in the form of gold traces to evoke those little yellow flowers on moor and streambank - for the simple reason that they deserve it.

I will add this further small reference to Tormentil. It was penned by The Rev. Hugh Monro of the parish of Uig in Lewis for the Statistical Account of Scotland, 1791 to 1799. I like it both for the information it contains and the creative use of the non sequitur.

All the woollen and linen cloth used for common purposes is spun and wove in the parish. There is only one surgeon in the whole island. All the inhabitants are of the Established Church. In the parish are four or five boat-carpenters, and several persons who make broags of leather tanned by the inhabitants with tormentil root. There are no instances known of suicide.