Alice Starmore Hebridean 2 Ply Yarn is made from premium quality pure new British wool, dyed in the fleece and skillfully blended into unique shades. It is hand-washed and dried in the Hebridean air, and supplied in hand-made skeins which may vary in weight. It is priced per 50g at standard conditions. All yarn is weighed to order on balances that are checked daily to ensure that you receive the correct total amount.

Summertide is part of the Summer Isle range, which is inspired by the tiny Summer Islands in the mouth of Loch Broom.

This scale reflects the fact that larger orders will go in separate boxes.

This scale reflects the fact that larger orders will go in separate boxes.

Alice Starmore Hebridean 2 Ply yarn is an artisan product and is hand-skeined. The skeins may vary in weight. It is priced per 50g of 2 Ply yarn.

Each order is weighed to ensure that you will receive – at minimum – the full weight ordered, regardless of number of skeins. Our yarn is kept and weighed at standard nett conditions. Our balances are checked daily using analytical weights to ensure that they are accurate at all times.

Please note that all of our yarns are supplied washed and therefore do not require to be washed or fulled after knitting, unless you have an accident. Generally speaking, your garments should not require cleaning/washing any more than a coat would.

All of our designs are made with 100% pure new wool yarns and should be washed either by hand with pure soap in hand hot-water, or in a front loading washing machine which has a specific wool programme using a small amount of non-biological detergent. We do not recommend the use of any fabric softeners or any additives that will remain in the fabric after rinsing.

If hand washing, dissolve a small amount of pure soap flakes – or if using a pure soap bar, grate the required amount – into hand-hot water. Ensure that the soap has thoroughly dissolved before immersing the piece. Use a gentle squeezing motion to wash; do not cause any friction by rubbing or scrubbing as this will cause the fibres to felt. Gently squeeze out the excess soapy water and rinse well in warm water. It is important to remove as much excess water as quickly as possible as the longer moisture is left in wool yarn, the more likely it is to shrink or felt.

The best method for removing water is to spin in a washing machine, but if you prefer to remove the water by hand then gently squeeze the piece to remove the main water load and then lay the piece flat on towels and roll up, squeezing out as much water as possible into the towels. You will have to use several towels and repeat the process to remove as much moisture as you can.

In all cases, dry flat on towels away from direct heat/sunlight, and smooth gently into shape. You can place small towels – or even better, cut and finish old towelling into the garment shapes, such as sleeves etc – and place inside the garment so that the two layers are separate. This will greatly help speed up drying process.

For straight, dropped-shoulder pullover styles, a woolly board is an excellent method of drying as the garment is placed on the board and dried to size allowing air to circulate inside. The board can also be used for cardigans in this style so long as you tack the front bands closed using a strong cotton thread, which you then carefully remove once the garment has dried. Glove boards can also be used for gloves which will allow them to dry in perfect shape. 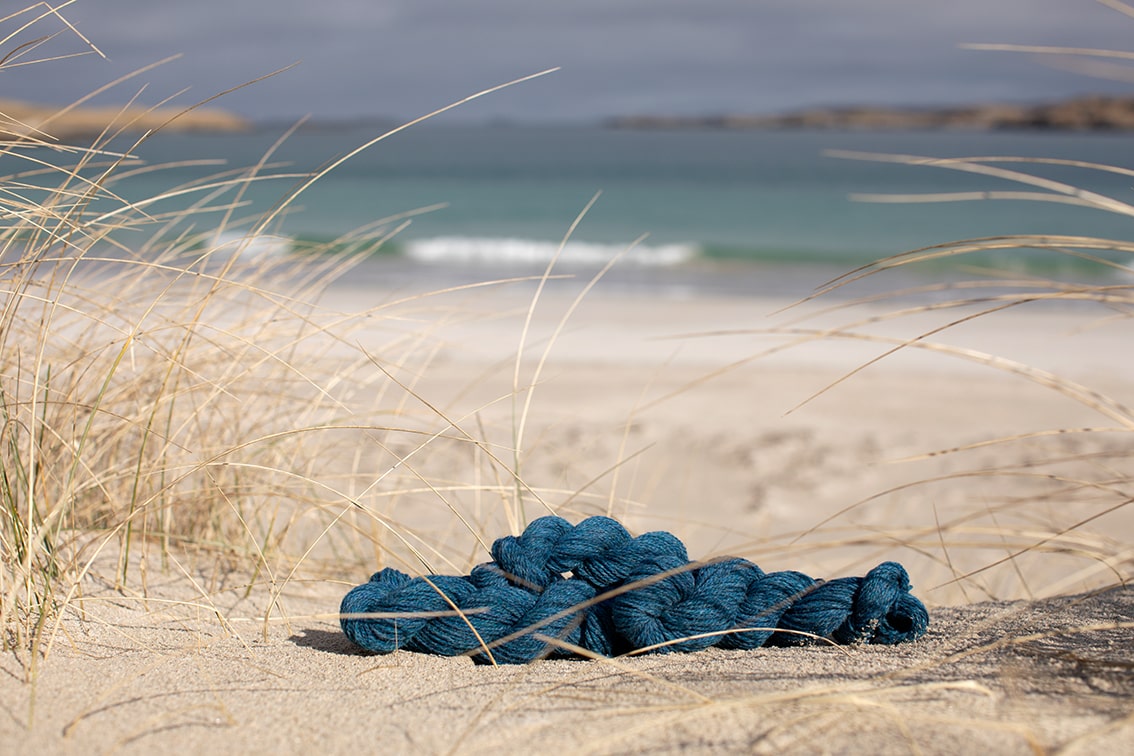 This blend is the result of my wish to capture the effect of the tide coming in over rocks at mid-day in high summer. The sea at this time is full of bright and lively blues, peppered with the glint of pebbles underneath. My favourite place to watch this happening is a cove called Geodh a' Chuibhrig near the village of Swordale in Lewis. It has a shingle beach of marvellous pebbles; a mysterious cave, and various massive rocks of different sizes and colours. There is one particular smooth black rock about twenty feet high, and it is from the top of this rock that I like to watch the summertide coming in. What follows is a story of absolutely no relevance whatsoever, apart from the fact that it has its denouement on this very beach near this black rock, so if you have no interest in tales of mutiny, murder and Spanish silver dollars, you had better skip.

You have heard of the Caine Mutiny? Well, this is the story of the Jane Mutiny. The Jane was a schooner-brig of Gibraltar. She could carry ninety tons and belonged to a Moses Levy who resided in that port. On May 19th, 1821, the Jane set sail for Bahia in Brazil under the command of an English captain by the name of Thomas Johnson. There were seven of a crew, plus another Englishman called Peter Heaman who served as mate, and a French cook called Francois Gautiez. Among a mixed cargo, the Jane carried 38,180 Spanish silver dollars packed in canvas bags. These bags were in turn packed in sawdust in eight stout casks, six of eighteen gallons, one of nine gallons and one of seven gallons. The distance from Gibraltar to Bahia is about 4000 miles, which allowed plenty of time for greed to rear its head.

It was Gautiez the cook who first fell for the lure of Spanish silver. He persuaded the mate Heaman to join him in a plot to steal the dollars and they set about trying to recruit others from the crew. One of them was an exceedingly honest man called Paterson, and he told them exactly what they could do with their scheme. Why he did not immediately call the captain and have the pair of renegades clapped in irons I really do not know, but his failure to do so was to cost him his life.

One night, Paterson was at the wheel with Heaman as officer of the watch. Heaman clubbed Paterson over the head with a musket while Gautiez sneaked into the captain's cabin and discharged a similar musket into him while he slept. Aided by an Italian called Dhura and a Maltese cabin boy, the conspirators dumped both bodies overboard, and then they locked the rest of the crew away in the forecastle. At this time they were five days west of the Canary Isles, and they decided to change course for the west coast of Scotland.

Barra is the southernmost island of the Outer Hebrides, and it was Barra Head where the mutineers made their landfall. Heaman went ashore masquerading as a Captain Rodgers where he purchased provisions and an open boat. Their plan was to scupper the Jane and land on the Scottish mainland with their ill-gotten gains, but a gale put paid to this idea. The Jane refused to sink and ran aground at Tolsta Head in Lewis. Far from reaching the mainland, the mutineers in their open boat were forced by wind and current onto my shingle beach with the black rock, where they took their dollars ashore.

The officers of Stornoway Customs & Excise were naturally deeply interested in the grounded ship and its shifty looking crewmembers. The Maltese cabin boy broke down under the questioning of a Mr Maciver of the Custom House, and the mutineers were all arrested. The silver was carted away from the beach into Stornoway. Peter Heaman and Francois Gautiez were tried and condemned to hang. The sentence was carried out on the sands at Leith in Edinburgh, to which port the accused had been taken by the excise cutter. Was all the silver recovered? Most, but not all. As is the way of the world, some Spanish silver dollars found their way into Stornoway pockets, and would crop up every now and then in subsequent years. As I lie on my rock and watch the incoming summertide, I sometimes think I can see one glinting in amongst the pebbles. So far I have been mistaken, but I have put the odd glint into our Summertide blend – just in case. 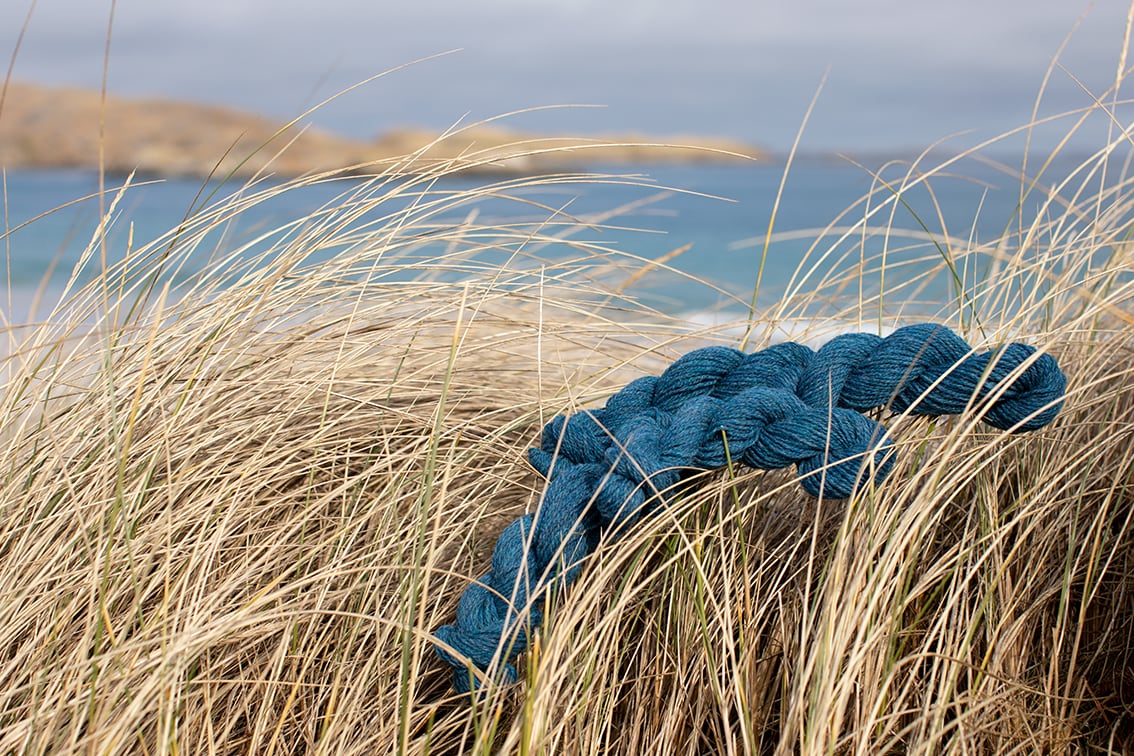