Hiort emerged from a huge volcano 54-65 million years ago; the rim of the volcano is defined above the ocean by the islands of Sòdhaigh (Soay), South and West Hiort, Dùn and Levenish. It then curves under the ocean and emerges again like a natural Gothic cathedral in the shape of Boigheariagh (Boreray) and the vertiginous fang-like pinnacles of Stac Lì and Stac an Àrmainn (the Warrior Stac) – the highest sea stac in the British Isles. Words such as awesome, fabulous and fantastic are much overused these days and so it is not possible to convey in words the forbidding physical majesty and beauty of these islands. It is no surprise that Hiort became Scotland’s first UNESCO World Heritage Site on the grounds of its natural significance. It is a National Nature Reserve with a population of nearly one million seabirds including the UK’s largest colony of Atlantic puffins. It is also home to the beautiful little Soay sheep – remarkable survivors of the type of domestic sheep that date back to the Bronze Age. 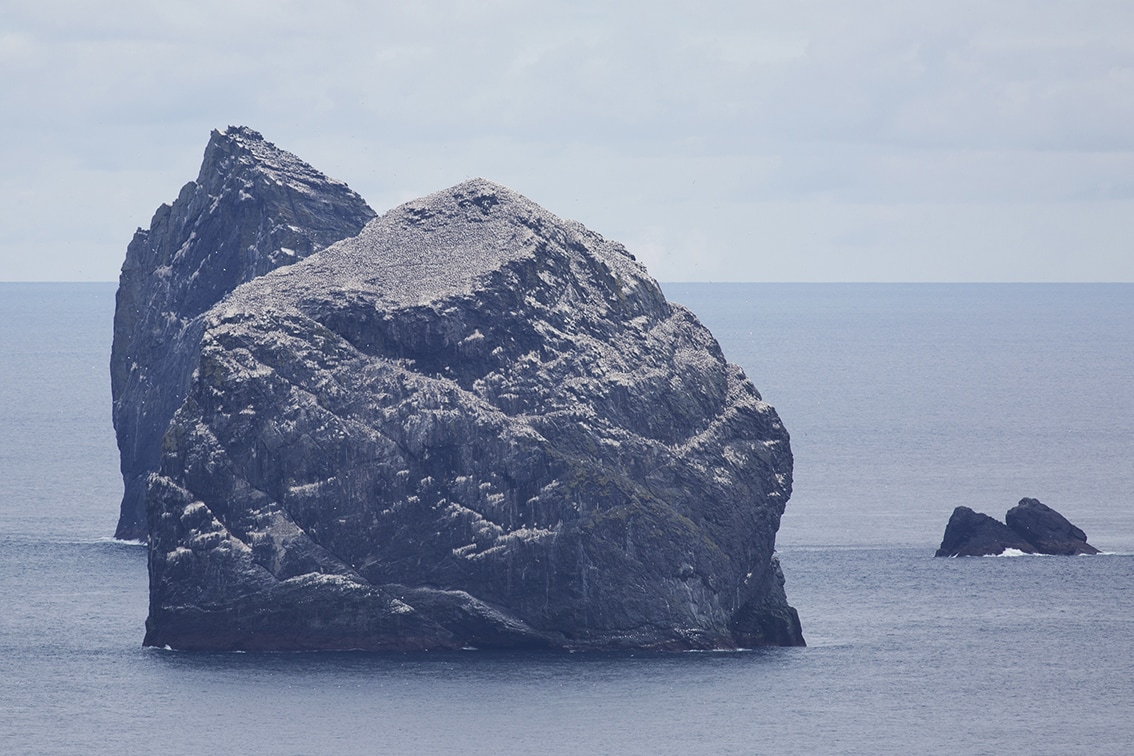 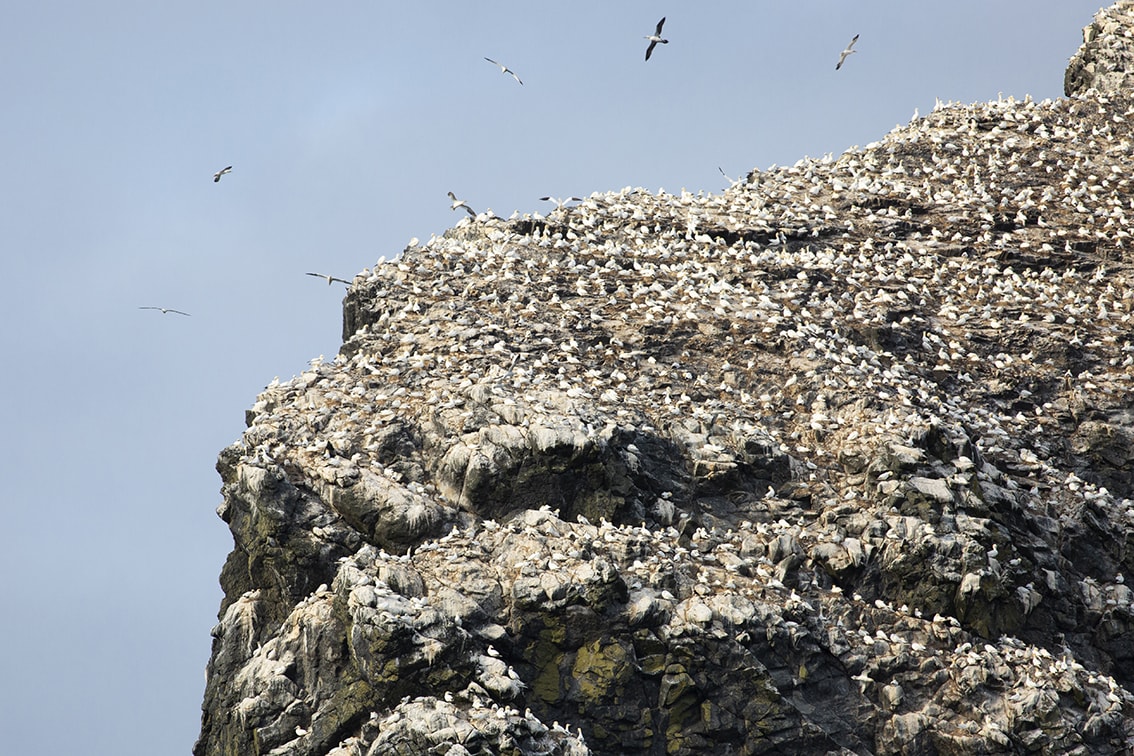 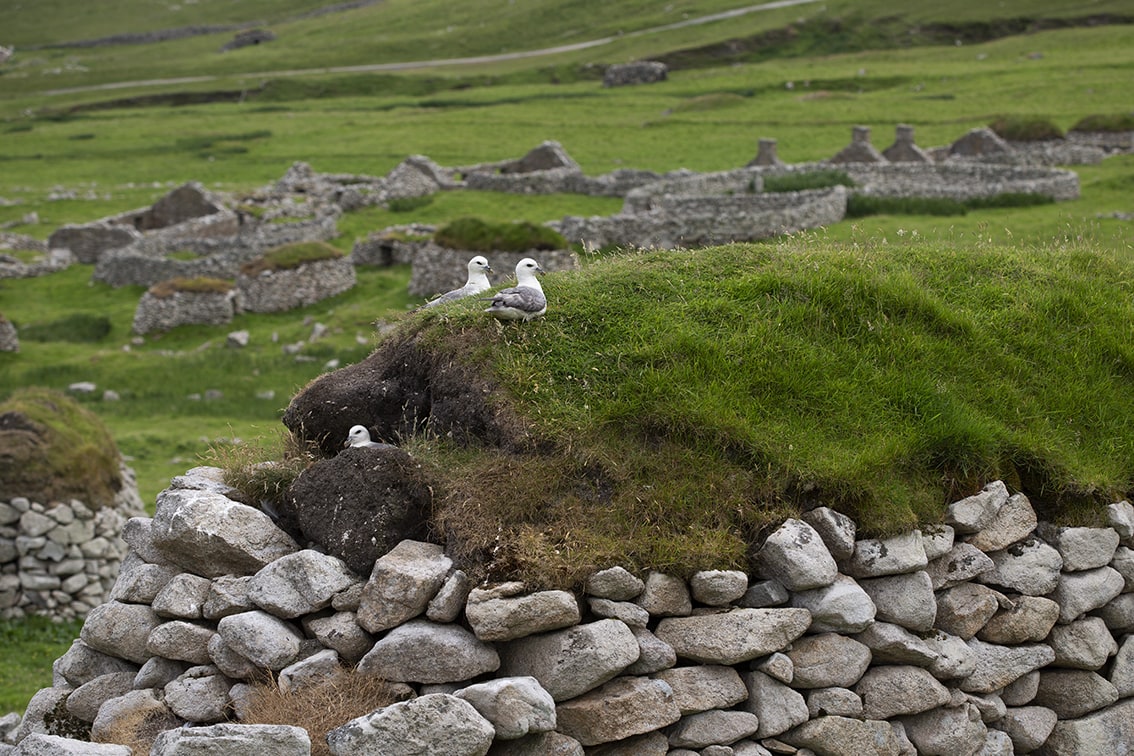 Hiort is one of only 35 Dual World Heritage Sites, for as well as its natural significance it also holds World Heritage status on the grounds of its cultural importance. Once ashore at Village Bay, the visitor is met with a sight that I would describe as a major work of art in stone, created over centuries. The scree from the hills surrounding the bowl-like glen where the village nestles, seems to have morphed into cleits, wells, walls, enclosures, byres and houses. Evidence of people permanently living on the islands stretches back to at least the Iron Age, and it was no doubt visited in Neolithic times when people first lived on my island home on Lewis.

The last of its population were evacuated in 1930 but life on Hiort in the centuries before was very similar to life in Lewis and the rest of the Outer Hebrides. Crofts (small strips of arable land) were worked to grow oats and barley, and sheep, cattle and horses were kept. In the summer, the women took the cattle over a ridge above the village to the Gleann Mòr and stayed in the Àirigh Mhòr whilst the livestock grazed the pasture, much as I did in my own childhood in the 1950s and 60s. Peat was cut for fuel and wool was spun and woven into tweed cloth just as in the rest of the Outer Hebrides, but rather unusually it was the menfolk of Hiort who sewed all the clothing, including the women’s dresses, whilst the women knitted stockings and gloves. However, there was one main difference between Hiort and the rest of the Outer Hebrides. Hebridean menfolk were chiefly fishermen while in Hiort they were cragsmen: a large part of their seasonal toil was spent suspended by ropes over cliffs one thousand feet above the ocean in order to gather the eggs and seabirds by which they lived. It was yet another level of danger above that of fishing on the open sea, though both took their inevitable toll. There are no trees on Hiort and so they had but few precious boats which they used sparingly for fishing, and for travelling to Lewis, Harris and Uist for supplies and barter. 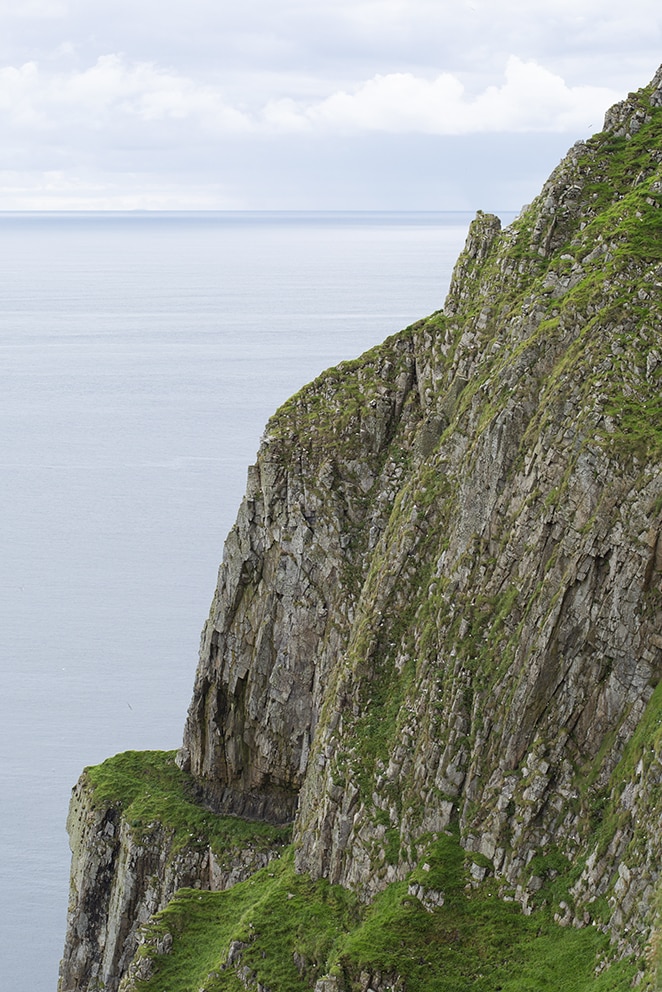 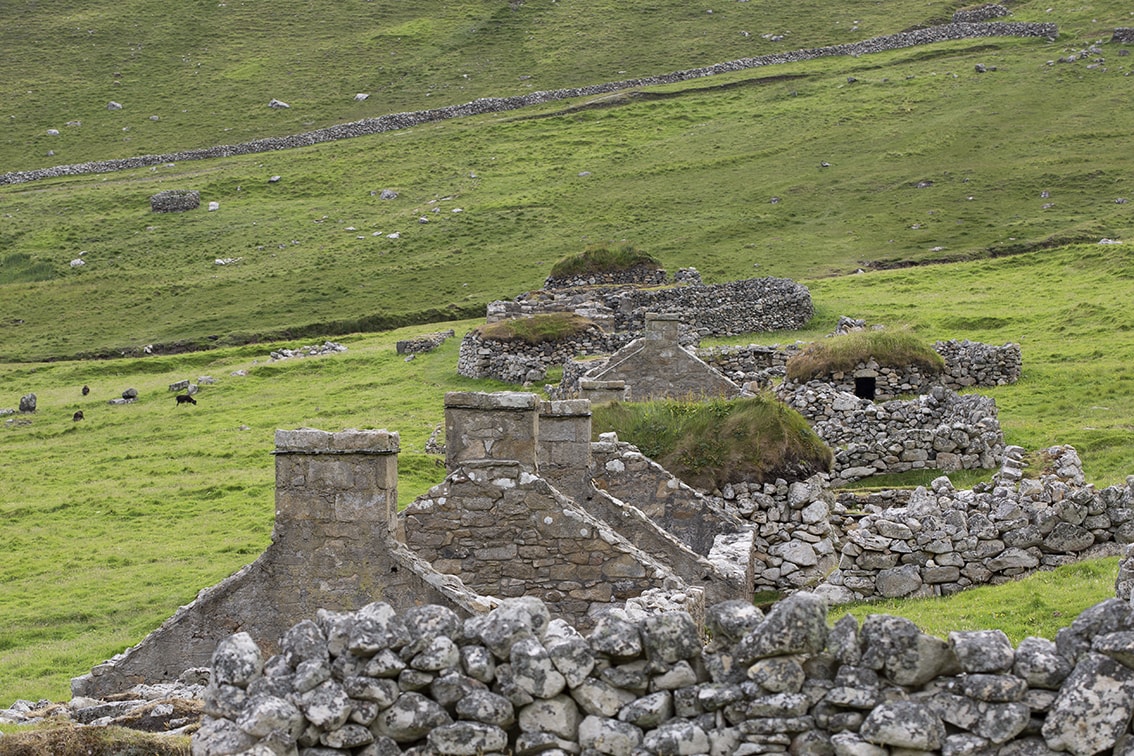 Hiort has had several hundred books and papers written about it – so much so that it has sometimes been mythologised into a fantasy existence. As an indigenous Gaelic-speaking islander I know how insulting and patronising it can be to have well-meaning academics and historians “explain” us to the world as though we were incapable or too ignorant to do so ourselves. Even the most revered of visiting folklorists can get things completely “arse over elbow” and come up with spectacular howlers. An instance of this is worth recounting in regard to Hiort. Alexander Carmichael, who famously gathered Gaelic lore for his Carmina Gadelica, visited Balranald in Uist in the mid-nineteenth century, where he heard a moving account of how eighteen St Kildans had arrived “in a frail coracle” during the late Spring of one year to purchase oats and barley, their own harvest having been destroyed by storms. Any Outer Hebridean would have immediately found credulity stretched to breaking point as a coracle is about as useful as a sieve in Hebridean seas. The idea of eighteen people in a coracle in the ocean between Hiort and Uist conjures up images of Edward Lear's Jumblies, going to sea in a sieve. There is a long tradition of straight-faced teasing in the Hebridean style of humour, and in all probability the learned gentleman was having his leg pulled. 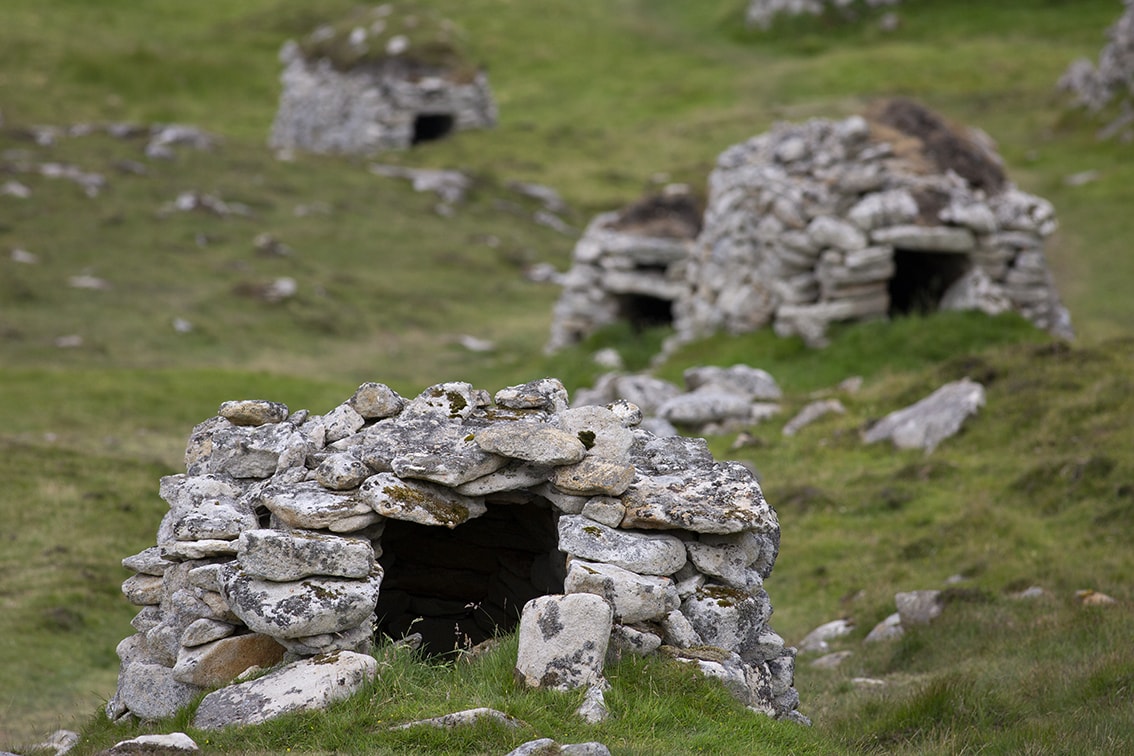 My first awareness of Hiort came through our family friend and neighbour Mae Macleod (née Macdonald) or Mae Hiortach as she was fondly known. I have a distinct memory of her very particular Gaelic – I must have been around four years old at the time and spoke mainly in Gaelic myself for I had not yet started school. I distinctly recall being entranced and asking her how she could “speak in a song”. I learned then that she was born in Hiort and left as child with her family when they made the hard decision to be the first family to leave in 1924. Her son Lewis and I were the same age, so another day etched in my memory is the first day we attended school. Mae and Lewis called round to our house and together we walked to the school: Lewis in his grey trousers, smart shirt and blazer; me in my Matheson tartan kilt and gold hand-knit cardigan embroidered with flowers on the collar.

Gaelic culture is rich in song, poetry, story and legend. It was the most natural thing in the world for family and friends to come together for a ceilidh after a long day’s toil. Ceilidh is the common term used for a visit or a get-together. In the tight-knit community of Hiort this was central to their lives and their own songs, poetry and legends were a glorious evocation of their extraordinary way of life. For them, and for all communities in the Outer Hebrides, there was nothing so exciting as a ceilidh with a visitor from another community where songs and tales could be swapped. A visitation from a srainnsear (stranger) was just as exciting, as it was a great opportunity to embellish and tell the tallest of tales. 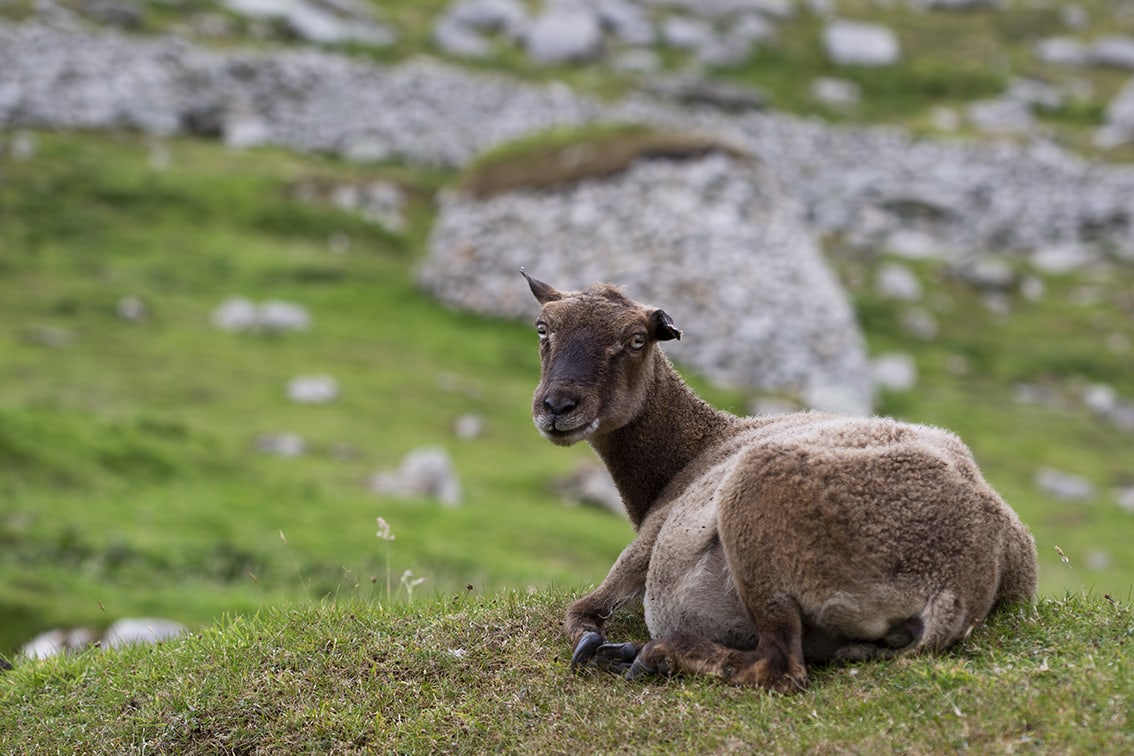 The Isle of Lewis was fortunate to be enriched by a good many of the population of Hiort who came to live here after the evacuation. Two of Mae’s older brothers and a sister came to Lewis: her brother Calum was employed in the town of Stornoway, first in the gasworks which supplied the town with light, and then he was engaged in building the power station and laying the first electricity cables in the Outer Hebrides. He eventually moved to London where he wrote a fascinating account of his life and youth on Hiort, including a lucid first-hand account of the reasons why the community made their hard and carefully considered decision to leave. It is very sad that though the people themselves made their situation well-known, various academics persisted in putting forward many other reasons for the depopulation, including an alleged inability to adjust to modern life. Nothing could be further from the truth: they were intelligent people with an extraordinary ability to survive in the most difficult of circumstances.

Speaking of modernity, I owe my lasting love of rock music to Mae’s two older sons, Neil and Innes. When Neil left school he worked for the company that brought television to the Isle of Lewis in 1964 and so they were the very first family on our street to have a TV set. The boys decided that they didn’t need their records anymore and so Mae brought me their entire collection as she knew I loved singing. My father bought me a little record player and so I had constant ceilidhs in my bedroom, introducing my friends to the The Everly Brothers, The Shadows, Johnny Leyton, Del Shannon et al.

Hiort is now owned by The National Trust for Scotland who work in partnership with the Ministry of Defence and Scottish Natural Heritage in a continuing programme of conservation and research which ensures the protection of this truly extraordinary World Heritage Site.

Jade and I made the journey to Hiort last summer and spent a wonderful night camping on the main island before sailing round Boreray and the Stacs. To say we were inspired is a huge understatement. The photographs shown here are from that journey and we have been discussing and experimenting with our ideas further since we returned.

I will be going back to Hiort very soon as a member of a conservation work party and will have the great privilege of living in one of the village cottages. I am looking forward immensely to making a contribution to the preservation of Hiort and I have no doubt that my time there will enrich me in many ways, not least with even more ideas for the future.