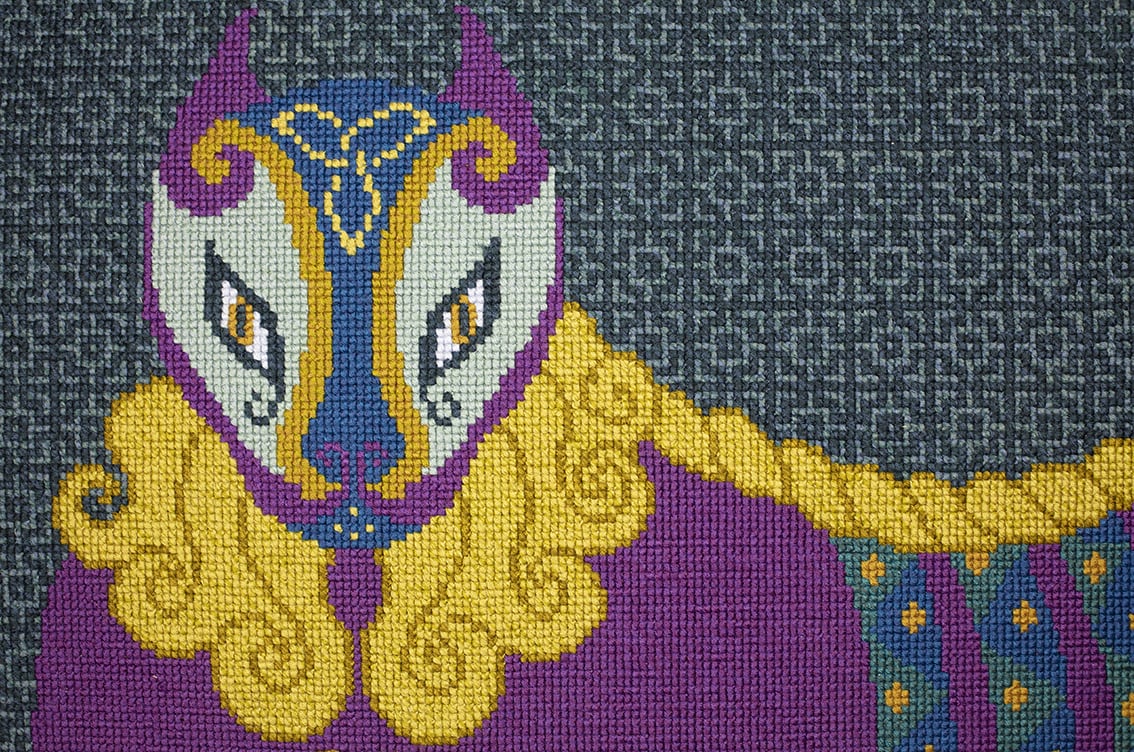 I chose a very conscious inspirational path for the designs I created for Celtic Needlepoint. That was to immerse myself in the vast historic range of Celtic art from the pagan to the Christian era. I then worked within the spirit of the art and used its visual language to produce new and original designs.

I made one deviation from creating original works to acknowledge my good fortune in owning a reproduction copy of The Book of Kells and also for the joy of seeing the actual book itself opened at the page of the symbols for the Four Evangelists. I wanted to depict some of this imagery as close to the original as the medium and yarn colours I had available at the time would allow, and so The Eagle Tile Cushion is a faithful copy of the symbol of John, as is the The Lion Tile Cushion the symbol for Mark. 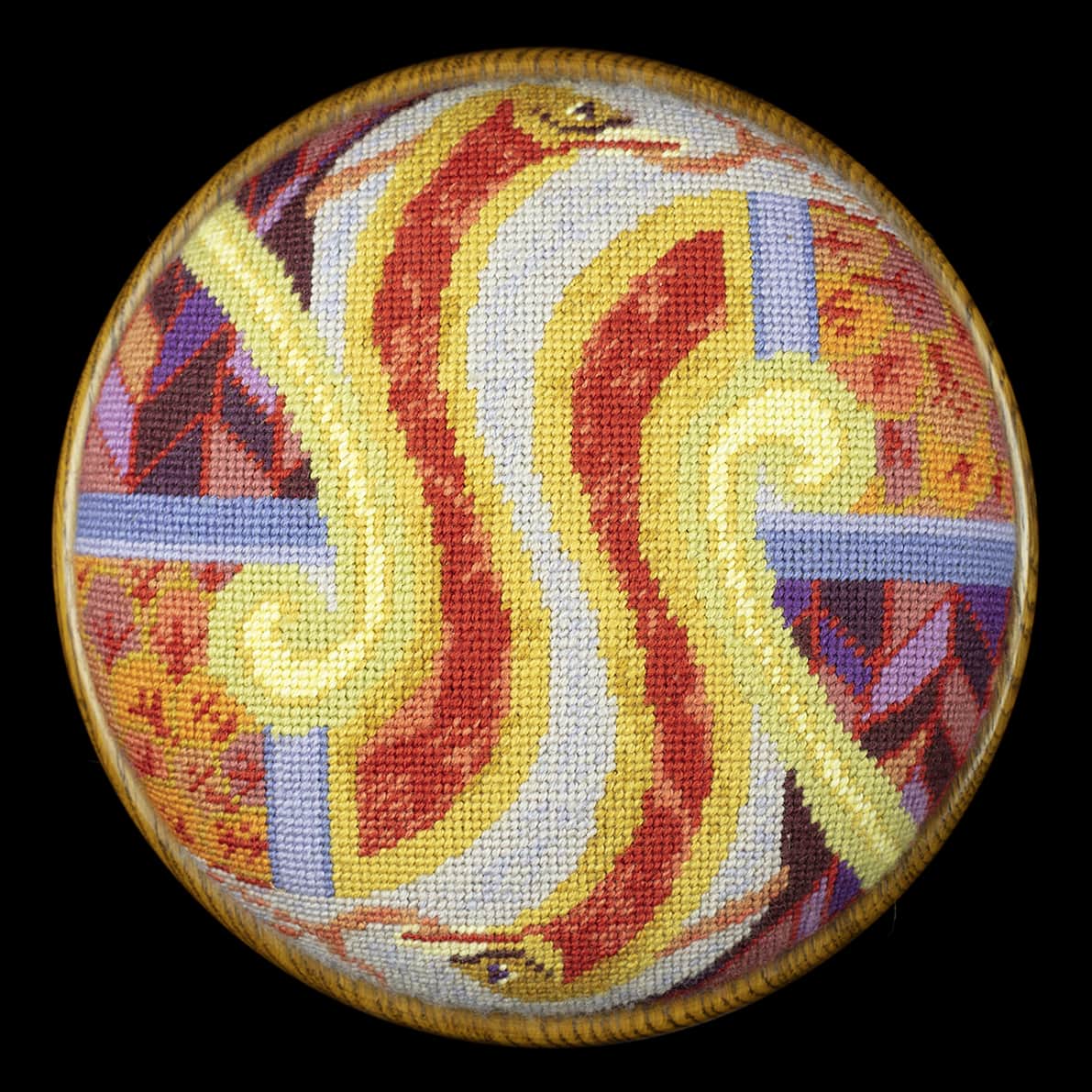 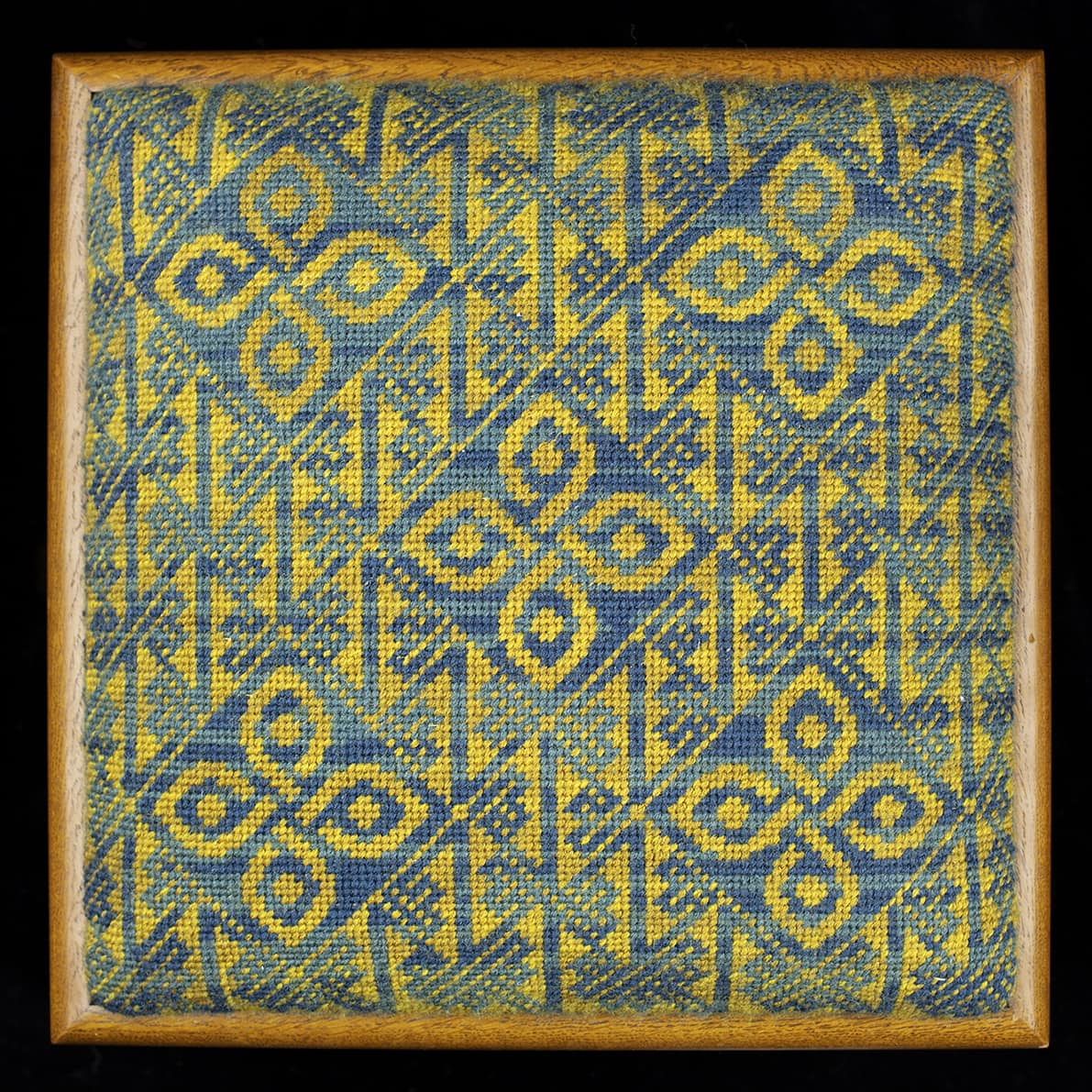 Bird forms appear in Celtic art throughout the ages. Often these forms are abstracted to fill every millimetre of space in whatever shape is available for decoration. This pair of birds are an adaptation from a detail in the Book of Kells. Two herons – each with a foot in mouth – are arranged in a two-coil spiral to fit the circular shape of this little stool.

Celtic key patterns were often used as borders and backdrops for more elaborate designs. For the square top of the sewing box I planned out a key pattern and then removed diamond-shaped sections and adjusted the keys to finish them around these spaces, which I then filled with a simple bold knotwork motif.

My idea to create a chessboard came from contemplating the purpose of highly sophisticated decorations on swords, shields, helmets, torcs and other items which revealed the wealth of Celtic chieftains. As with all human cultures, items of aggrandisement were of key importance in setting an advantageous scene in some power-play, and so I created my Spiral Chessboard in exactly that spirit. It encompasses all the different design elements of Celtic art. A dazzling key pattern serves as the playing area while the borders include formal spirals, knotwork corners and zoomorphic finials. It is a very elaborate design that requires time and patience in its execution. So whether it is for playing chess or as a wall hanging, the result is in an impressive heirloom. 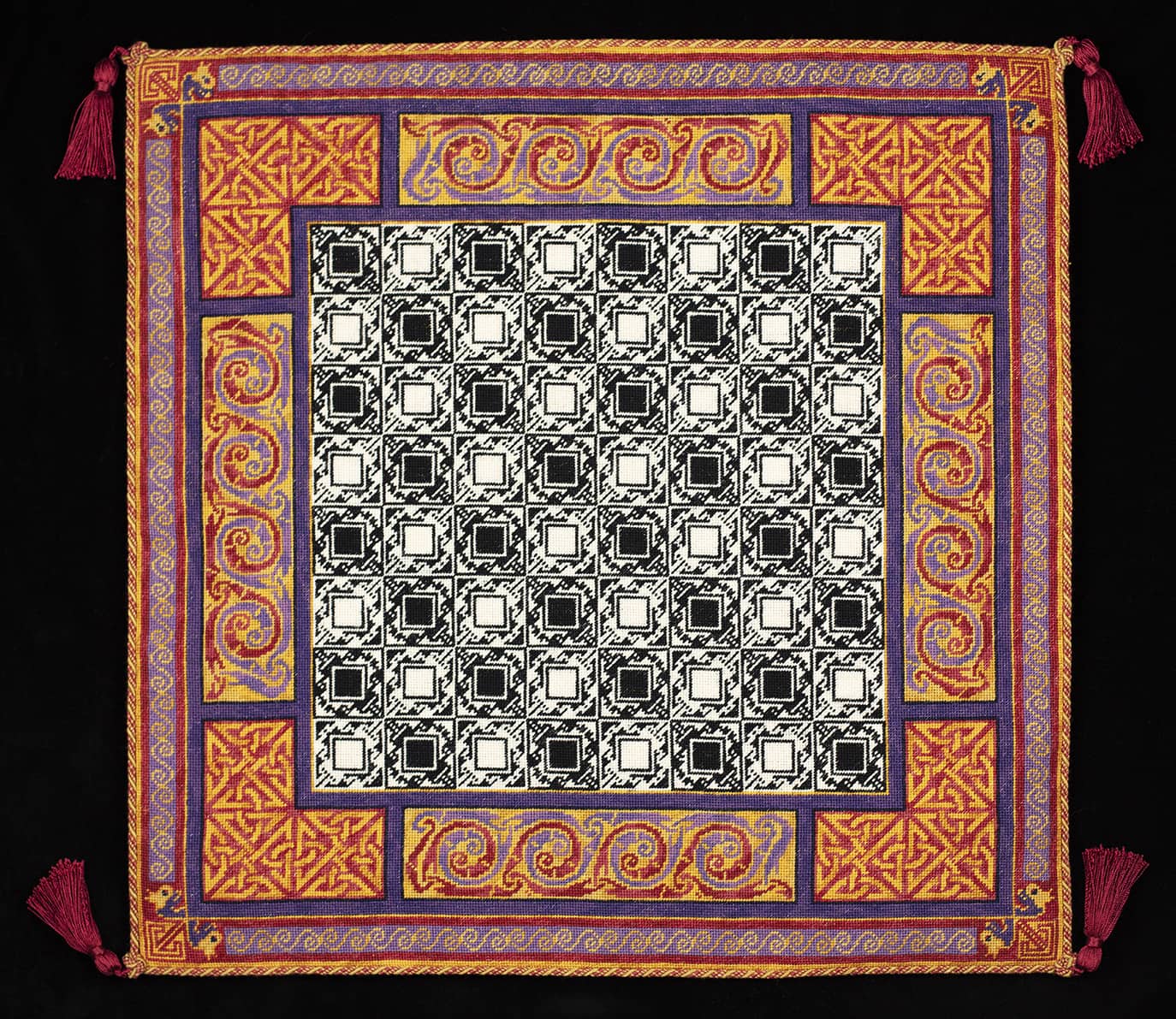 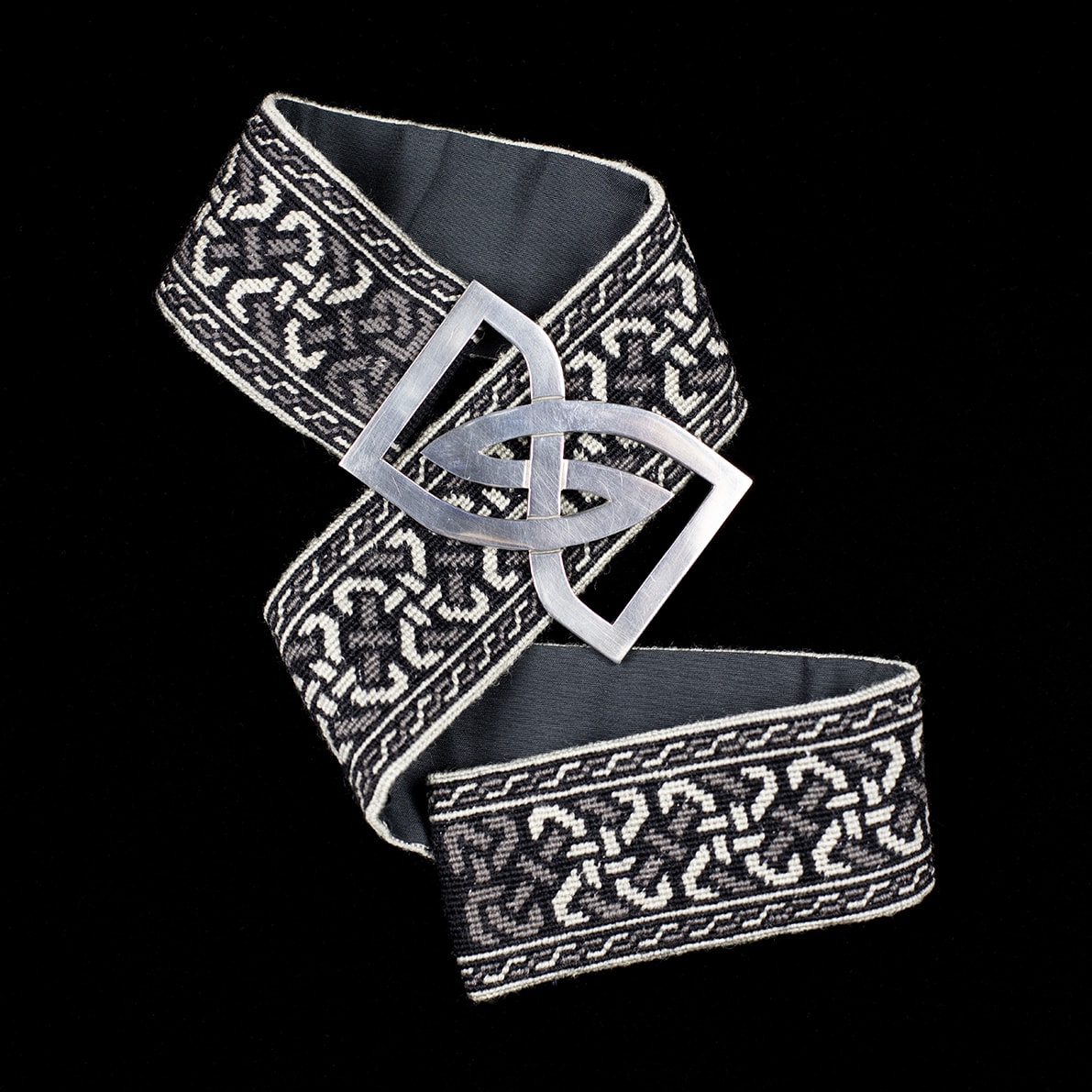 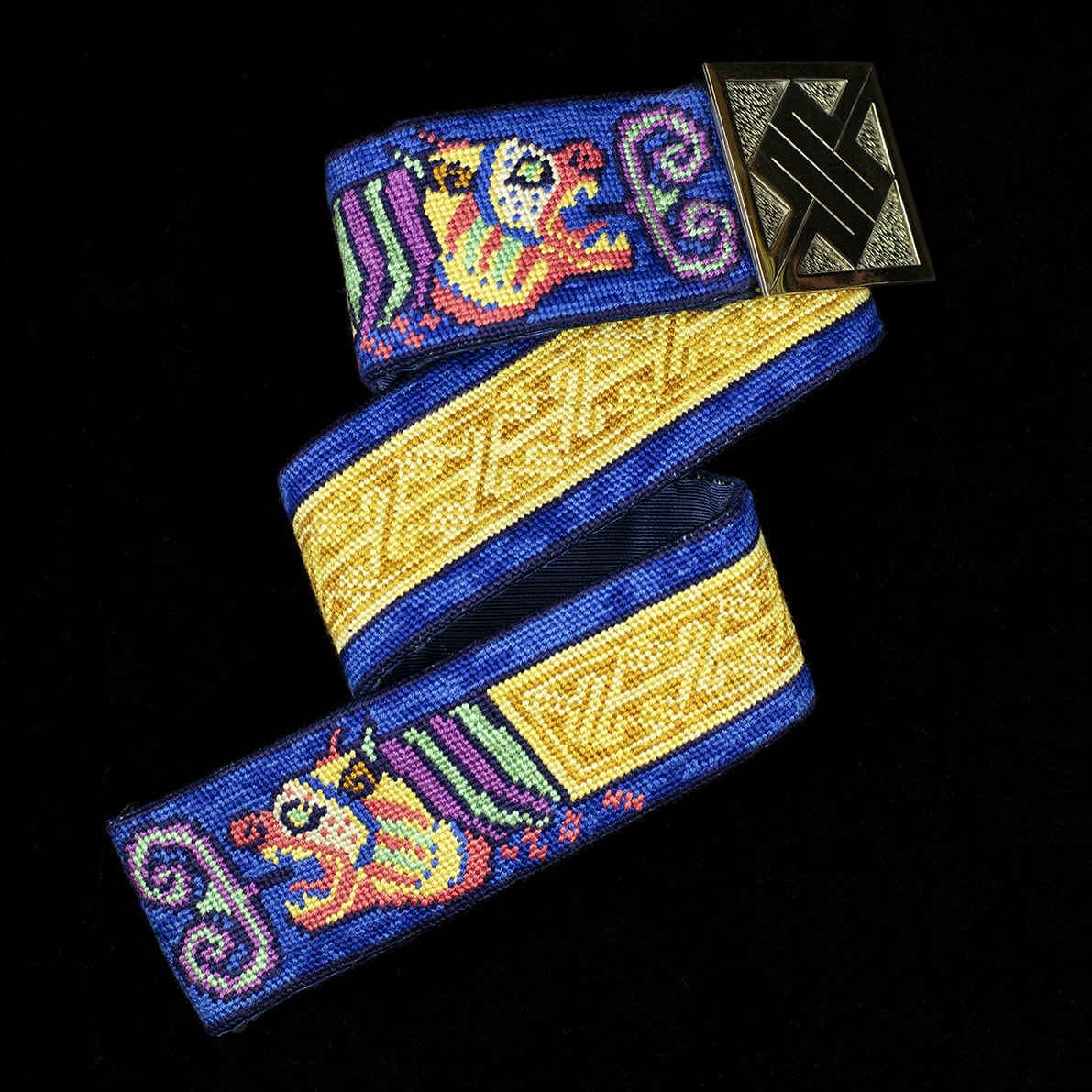 Interlacing patterns have often been used in Celtic design as borders or frames for larger designs. It was this linear quality that suggested that they could be ideally used in a belt. I chose a very regular and repeating pattern for my Knotwork Belt so that it could be easily adjusted in length. I wanted the pattern to dominate and so I used muted solid colours, but it would be very easy to substitute other colours for a very different effect. I designed the silver clasp buckle specifically for this belt.

The Celtic balance between nature and abstraction captivates me the most when I see plain geometry mutating into forms of fantastic creatures. I designed the Beast-head Belt so that the geometric key pattern explodes at each end into raging dragon heads. When the belt is fastened, the heads are in full focus, guarding the buckle. As with the Knotwork Belt, I designed the gold-plated buckle specially for this item. 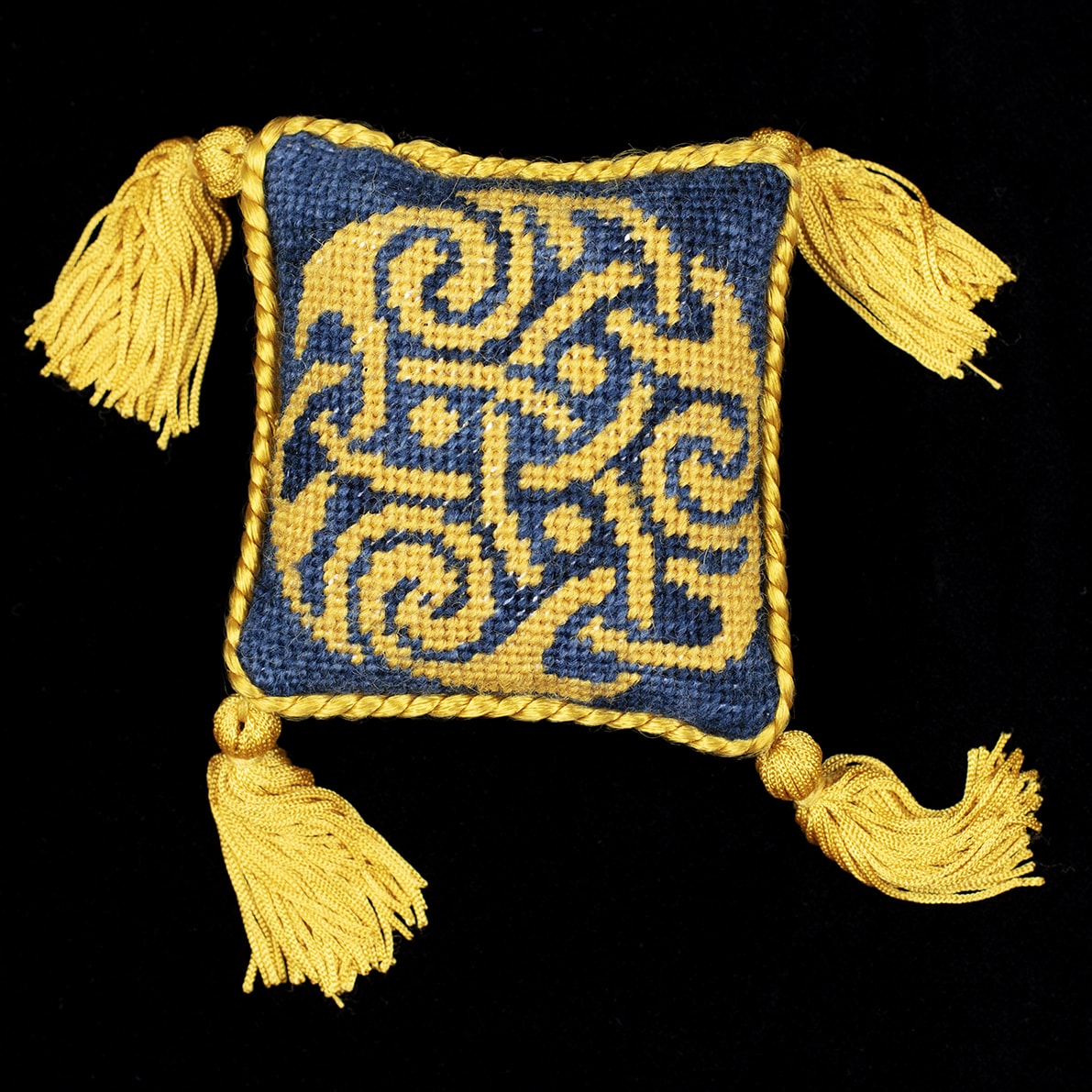 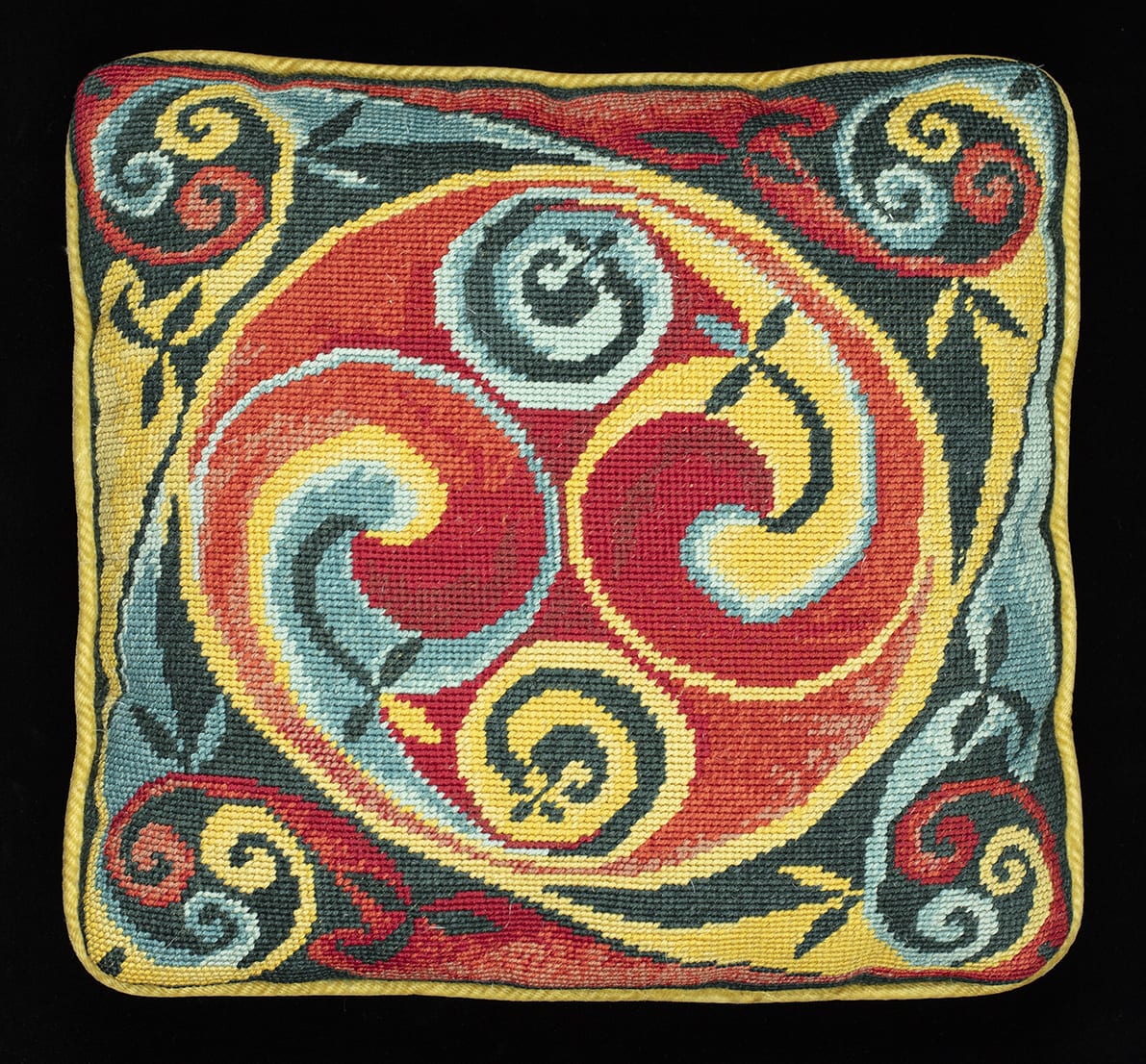 This little pincushion is the ideal project if you want to come as close to instant gratification as needlepoint will allow. It can be equally described as a spiral knotwork or a knotwork spiral and I found the basis for it in a minute detail on a very elaborate page of the Book of Kells.

Spirals have been used as symbol and ornament throughout the span of Celtic art, from early renderings on stone and metal, through to elaborate designs in Christian manuscripts. The energy of the spiral suggests to me the motion and fluidity of a sea wave and this compelled me to use bright, contrasting colours to further enhance the exuberant quality of the design for this cushion cover. 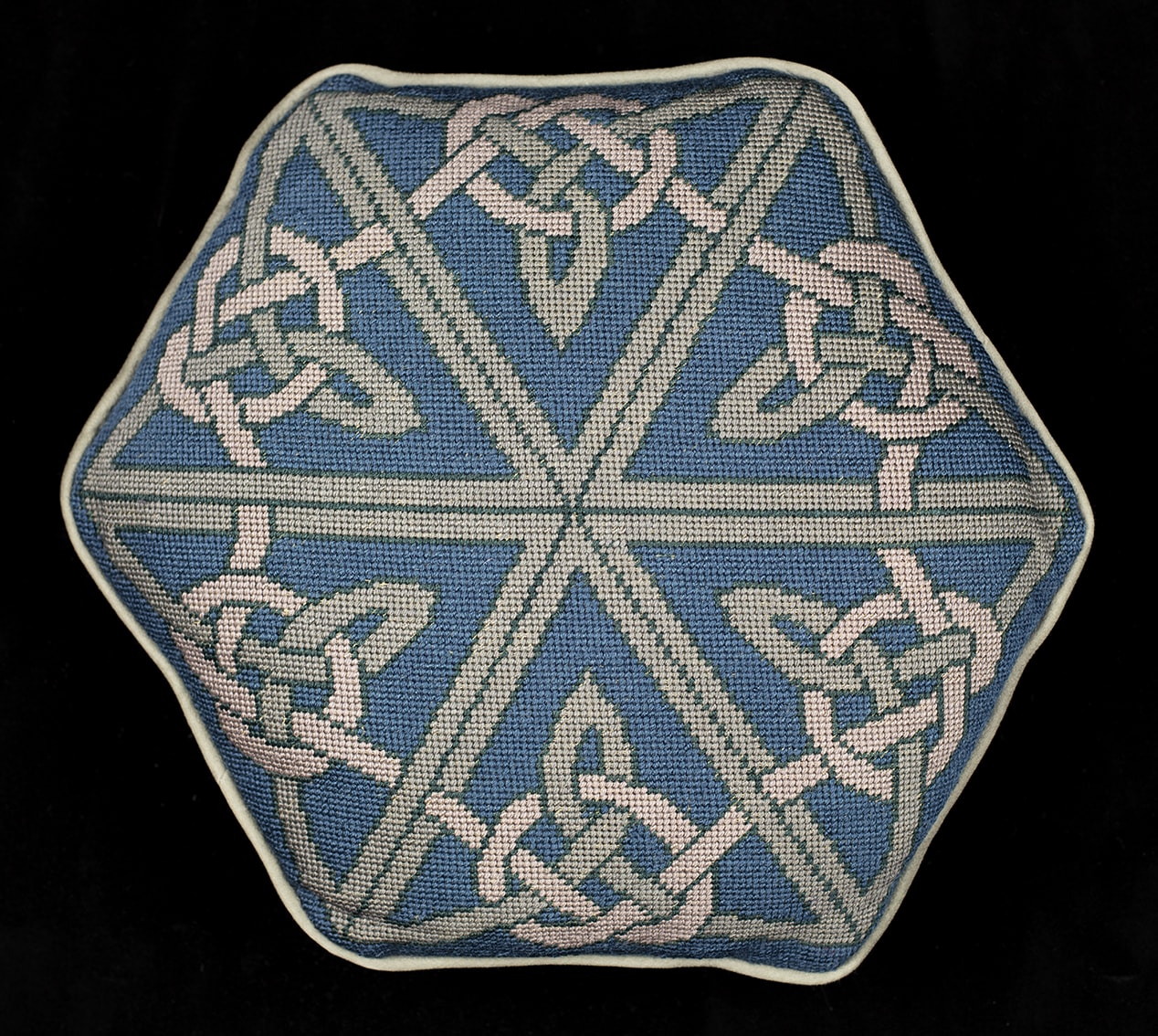 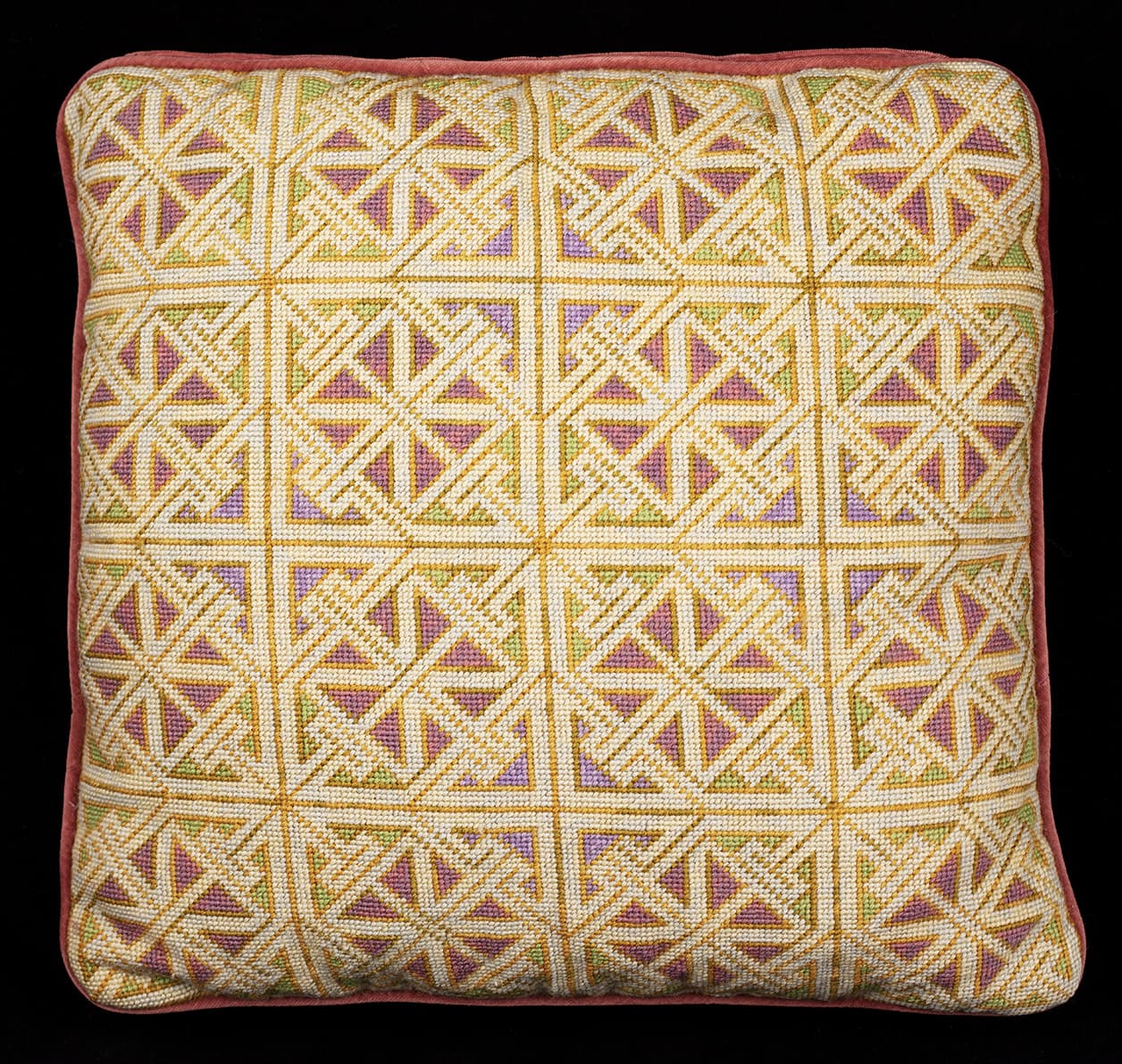 Interlacing knotwork is the most universally known type of Celtic pattern although it actually appeared at a later stage in Celtic art than spiral and key patterns. Knotwork is particularly associated with the Pictish stonework of eastern Scotland. The unbroken line – as a symbol of continuity – has a special power for me, and never more so than when it is worked in stone. For my Hexagonal Knotwork Cushion I chose dark, moody colours to suggest the antiquity of stonework and to add strength to the two continuous, interlaced lines which form the hexagonal design.

Key patterns are one of the fundamental forms employed in Celtic decoration. The strict geometry of the patterns is based on a system developed from the basic square. Within the square, diagonal lines are drawn in a particular order to create the labyrinth pathways of varying complexity. The key pattern of my Key Cushion, composed of sixteen patterned squares, is a fine example of the form. I wanted to contrast the strong, rigid nature of the pattern with soft colours, shaded at random, so that the whole effect was one of contained movement.

The Key and Knotwork Footstool Cover is the result of a blend of inspirations, patterns and colours. My original idea was to combine two very different but constant sources of inspiration – Celtic art, and the colours and textures of the seashore. The central key pattern is rendered in a random mix of three bright colours on a mixed and muted background suggestive of sunlit water moving over pebbled beaches. I gave the knotwork a looser, flowing feel in both shape and use of colour, reminiscent of the graceful motion of seaweed on the tide. 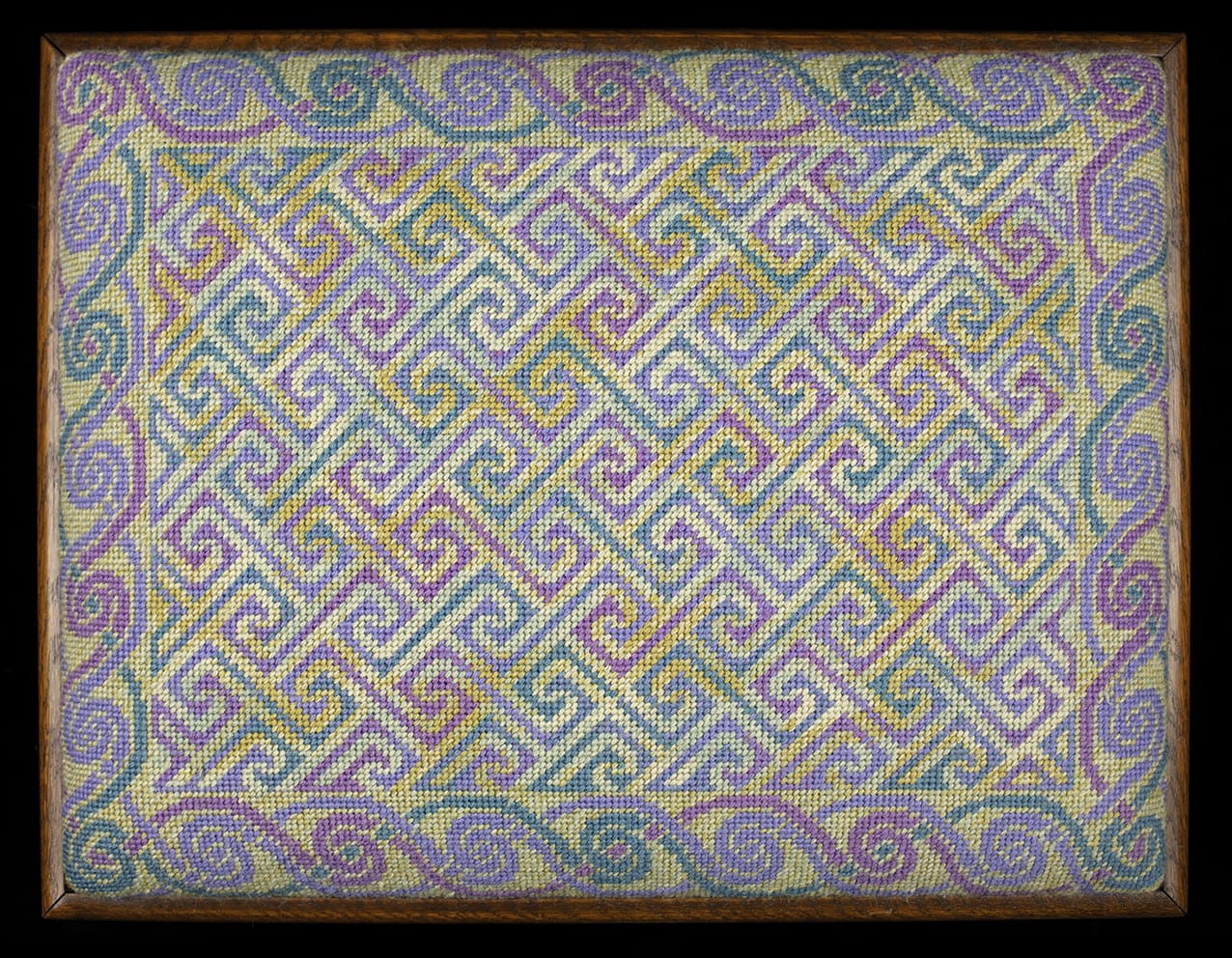